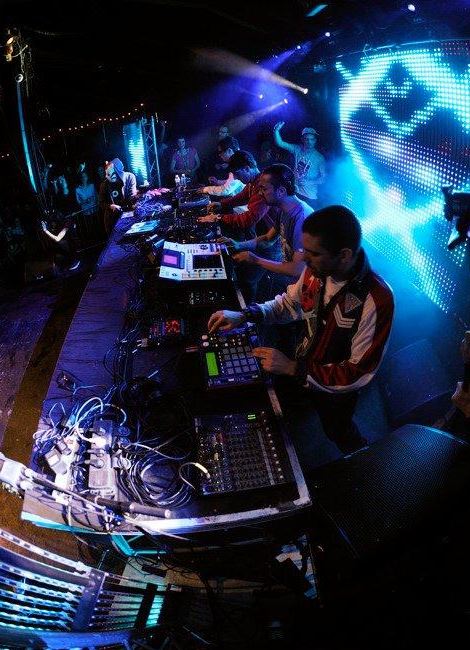 Dirtyphonics is a French electronic music band from Paris, consisting of members Charly, PitchIn, and Pho. Their music style is based on electro, dubstep, drumstep, drum and bass and trap.
In 2008, Dirtyphonics signed on Shimon's label AudioPorn Records and showed their very own vision of drum and bass with songs such as Vandal, Quarks, Lottery etc.[1] After releasing remixes on many labels, such as Virgin Records, Atlantic Records, Warner Records, Sony Records, Mau5trap, Cooking Vinyl, Ram, MTA, Ultra Records, they joined Dim Mak Records in 2012.[2] Dirtyphonics has worked with Linkin Park, Skrillex, Kaskade, Benny Benassi, Foreign Beggars, NERO, Modestep, Steve Aoki, Marilyn Manson, and many more through collaborations and remixes.
On March 19, 2013, Dirtyphonics released their debut full-length album Irreverence which merges heavy bass music, drum and bass, dubstep, and electro. The first single from the album, "Dirty," was released in October 2012, followed by "Walk In The Fire," "No Stopping Us," and "Hanging On Me" in 2013 with remixes covering most genres of electronic music.
In early 2014, Thomas quit the band to become a painter. The band keeps touring more than ever and finds a second wind in the studio. Dirtyphonics just released "Where Are You Now" feat. Brightlights, a collaboration on Zeds Dead new EP on Mad Decent and they are now working on their next EP for Dim Mak Records to be released in the fall of 2014.