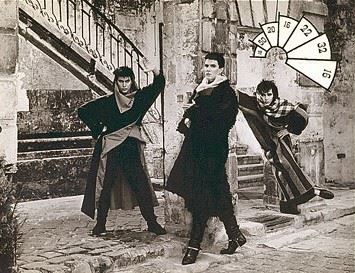 There are more than 6 bands with the name Arcadia: a British pop band, an Australian Metalcore band, an Italian industrial/thrash metal band, a Japanese power metal band , a Canadian Christian Rock band, a Latin band, a Filipino Metalcore band.
1. Arcadia was the pop group formed in 1985 by Simon Le Bon, Nick Rhodes and Roger Taylor of Duran Duran, during a break in that band's schedule. However, Roger Taylor appeared in only a few band photographs and in none of the music videos, and stated he was only to be involved in the recording side of the project (he also had minor involvement in The Power Station, the other Duran Duran splinter group). The name of the band was reportedly inspired by the Nicolas Poussin painting Et in Arcadia ego (also known as "The Arcadian Shepherds").
The group recorded just one album, the platinum-selling So Red the Rose. It peaked at number 23 on the US album chart, and featured the Top 40 singles "Election Day," "The Flame," "The Promise," and "Goodbye Is Forever." Simon Le Bon described So Red the Rose as "the most pretentious album ever made"[1], while All Music Guide called it "the best album Duran Duran never made"[2]. Musicians who contributed to the album included guitarists David Gilmour (Pink Floyd) and Carlos Alomar, pianist Herbie Hancock, Sting (who provided backing vocals on "The Promise"), Grace Jones (who provided brief but dramatic spoken-word interludes on "The Flame" and "Election Day"), bass player Mark Egan of the Pat Metheny Group (whose very distinctive fretless sound can be recognised in "The Promise", "El Diablo" and "Lady Ice") and David Van Tieghem, a percussionist from New York.
The band also recorded the single "Say the Word" for the Playing for Keeps movie soundtrack.
Arcadia continued the Duran Duran tradition of a slick image, tasteful fashions and hair-dos. For the Arcadia incarnation of their ever-changing band aesthetic, Rhodes, Le Bon, and Roger Taylor donned an upmarket 'gothic' look of black tuxedos, vintage formal wear, and bow ties. The three also dyed their hair black, as seen when they performed (as Duran Duran, with Andy and John Taylor) at the 1985 Live Aid concert in Philadelphia.
The group did a variety of promotional appearances on television, but never toured, and dissolved a year later in 1986 when Duran Duran re-formed with Le Bon, Rhodes, and bassist John Taylor to record their next album Notorious. During the tour to support Notorious, Duran Duran played the Arcadia single "Election Day" as well as "Some Like it Hot" from the Power Station record. Drummer Roger Taylor retired from the music business for 15 years after the release of the Arcadia album, but returned to rejoin the original Duran Duran line-up in 2001.
2. An Australian Metalcore band from Adelaide, South Australia. Arcadia have two releases under their name, 2009's 'From Ashes, We Rise' and 2012's 'Worlds Collide'. Both releases have been very well received, and have given the band the chance to play with bands such as Hypno5e (France), Sybreed (Switzerland) and many Australian bands, as well as two Australian tours.
3. Italian industrial/thrash metal band that formed in 1996. They have released three albums (Synth, Fracture Concrete, and Cold Cold Bones).
4. Japanese power metal band that formed in 2000. They have released two albums (Tales of Fantasia and Flight to the Rainbow).
5. A Canadian Christian Rock band that released it's debut album, "Passage" in January.
6. A Filipino Metalcore band signed under Tower of Doom records. They recently released their debut record "Parallels".
7. A Japanese visual-kei band that only produced one single. Alternative tag: ＡｒｃＡｄｉＡ.