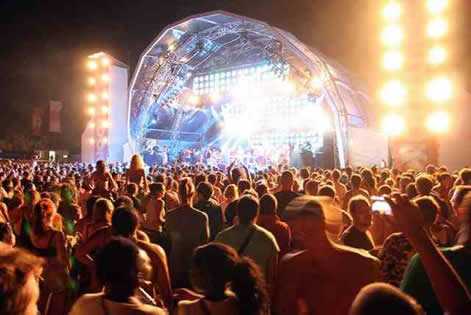 The success of last years Outlook paid off when the UK Festival Awards crowned us “BEST OVERSEAS FESTIVAL”. Now in its fifth year, Outlook presents the most diverse and interesting line up you will find anywhere in Europe this summer!

Set in a breathtaking abandoned Fort Punta Christo, the Outlook festival site looks like something from another world. By far one of the most unique festival sites in Europe, Outlook is located on the northern coast of Croatia and is surrounded by crystal clear Adriatic waters. Outlook boasts the best location for sun soaked beach parties and all night raving till sunrise in the Fort. The legendary Outlook boat parties will also be setting sail with some of the most exciting names in Bass Music and Soundsystem Culture!
Showcasing everything from original Dub Reggae pioneers to the new school masters of electronic music, the line up is already starting to take shape and with hundreds more acts yet to be revealed, the 2012 line looks set to be the biggest to date!
Amongst those already confirmed are names synonymous with Outlook that have seen it grow over the years. Dubstep heavy-weights such as Hatcha, Loefah, Mala & Coki see their residency renewed on the Outlook lineup.
Remaining true to the origins of the music, Outlook will also be supplying some of the biggest names in Dub and Reggae this year. Far from the shores of the Caribbean, hailing from the far reaches of New Zealand, Outlook are proud to announce Fat Freddy’s Drop will be headlining the Harbour Stage this year. This fantastic seven piece band from Wellington effortlessly combine elements from Dub, Reggae, Soul and Jazz with soothing vocals. Perfect for the Outlook vibe.
Joining forces on the Dub and Reggae bill we find other greats such as Jah Shaka, Outlook family friends Iration Steppas and the sought after sound of Mungos HiFi. With their roots deep in soundsystem cluture, expect to see performances from Gentleman’s Dub Club who have never failed to impress with high-energy performances.
The Jungle pioneer Congo Natty will return to Outlook in 2012. As always the enigmatic performer will be accompanied on stage with many of the talented MC’s he is known for working with. MC’s Flowdan & Daddy Freddy have been confirmed for Outlook and will no doubt be backed by the dark, Dub heavy sounds The Bug.
A first timer to the Outlook but by no means a stranger to the music; a truly influential artist who defined the sound of the 90’s with his ground breaking album Timeless and prolific label Metalheadz, Outlook welcome Goldie to the stage. Other popular names in DnB like Norwiegan DJ Teebee and production partner Calyx also make their way to the stage for the first time.
As ever Hip Hop will have a strong presence. welcomes some real classic acts onto the Outlook shores; with a health of work behind him, Malik Taylor aka Phife Dog comes to Outlook to perform tracks from classic albums  ‘Low End Theroy and Beats’ and ‘Rhymes and Life’. Joining this timeless artist is another classic name in Hip Hop, representing the west coast sound, Souls Of Mischief bring the noise of Oakland in the mid 90’s. Looking now to modern movers in the Hip Hop scene we call on France’s finest beat smith, Onra who will be crash-landing for a seriously colourful live performance.
Outlook will also embark on a rib rattling global tour bringing a taste of what you can expect from this years festival to a city near you. Watch this space!
With hundreds more acts still to be confirmed as well as some very
exciting extras, stay tuned, as Outlook 2012 looks set to blow your socks off! HOLD TIGHT.

Published on 22 January 2012 by Wayne Feltham