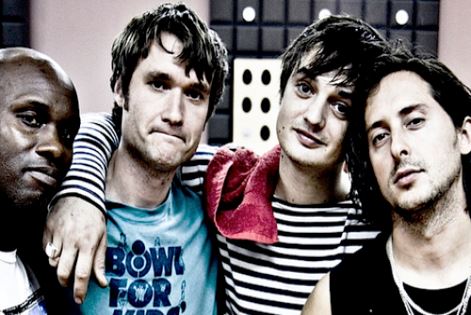 Flying the flag for British music, the Q Awards in association with Absolute Radio today continued its tradition of celebrating the cream of UK talent and delivered a star-studded bash at London’s Grosvenor House Hotel with music’s biggest names in a

Taking away three of the day’s major reader-voted awards were Foals, James Bay and Florence + The Machine, whose artistry and success were celebrated at the event, this year hosted for a second time by Absolute Radio’s Christian O’Connell.

Noel Gallagher’s High Flying Birds beat off competition from Jamie XX, Everything Everything, Florence + The Machine and Blur to snap up the hotly contested Best Album Award, presented by JBL for the expansive, adventurous Chasing Yesterday – the year’s biggest-selling album on vinyl. Coldplay’s Chris Martin made a rare public appearance to present the award to the ex-Oasis legend.

Nominees for Q Best Video category included Muse (Psycho), Foals (What Went Down), The Weeknd (Can’t Feel My Face) and Miguel (Coffee) but the unrelenting drama of Florence + The Machine’s Ship To Wreck was what won the voters over. Intricately choreographed and featuring the singer physically wrestling with her own alter ego, the video was directed by Vincent Haycock at Florence Welch’s London home.

Ed Sheeran has been crowned Best Solo Artist, presented by Citroën, for the second year running. Building on the success of second album x, which reached Number 1 in 15 countries, he played three sold-out Wembley Stadium shows this summer and edged out competition from Sam Smith, Kanye West, Taylor Swift and Noel Gallagher for the award.

Sheeran, Gallagher and Florence + The Machine were in good company alongside the other big winners of the day including Royal Blood, who were honoured with the Best Live Act presented by The Cavern Club, and Foals who took away the coveted Best Act In The World Today presented by Queen Bohemian Lager. Mark Ronson was also a winner after being honoured with the Q Hero Award, presented by Corinne Bailey Rae.

James Bay, whose debut Chaos And The Calm is the biggest-selling artist album released this year, won Best New Act presented by Orange Amplification, handed to him by Sir Tom Jones. The singer-songwriter was up against an extremely strong, broad list of nominees, including Jess Glynne, Years & Years, Slaves, Circa Waves, Wolf Alice and Songhoy Blues.

Soul II Soul were presented with the Q Classic Album award for their 3x platinum-selling masterpiece, 1989’s Club Classics Vol. One, which featured the genre-defining hit singles Keep on Movin’ and Back to Life (However Do You Want Me) and helped them become the first band to take British club culture to America. They collected their award from UK soul sensation Ella Eyre. Classic Single went to timeless head-banging classic Queen’s Bohemian Rhapsody which marks the 40th anniversary of the track (originally released 31 October 1975. La Roux and Tim Burgess were on hand to present New Order with Outstanding Contribution To Music. The Manchester band created one of the defining sounds of the ’80s by melding post-punk sonics with the era’s blossoming club culture. Released in 1983, Blue Monday became the biggest-selling 12” of all time, while this year’s Music Complete album is one of the finest of their career.

There was also no shortage of rock royalty on the day with legendary Black Sabbath guitarist Tony Iommi recognized for his genre-defining playing with the Gibson Les Paul Award. Not one but two pioneers of ’80s sound were also honoured: synth-pop trailblazer Gary Numan collected the Innovation in Sound Award presented by Sony Xperia, while Duran Duran scooped up the Q Icon Award, in recognition of turning their new-wave and synthpop origins of the late-’70s into world-conquering pop-rock that still resonates today.

Matt Mason, senior editor of Q Magazine, said: “Q magazine and the Q Awards are about seeking out and celebrating great music and the people who make it. It’s been an incredibly exciting year for music, particularly in the UK, and today’s winners reflect that. It’s thrilling to recognize a band such as Foals who’ve reached this level of success by continuing to pursue their own unique vision, while the phenomenal impact of Florence + The Machine, Ed Sheeran and James Bay on both sides of the Atlantic underlines the power of great British pop music.”

“It’s an honour to celebrate the careers of so many artists that have genuinely shaped modern music. With very different ideas and innovations, Gary Numan, Tony Iommi, Queen, New Order, Duran Duran, Soul II Soul, Mark Ronson and Noel Gallagher have all achieved the same result: radically re-defining the musical and cultural landscape. The fact that so many of them continue to make excellent and impactful music today only emphasises what a brilliant year it’s been. We look forward to discovering and celebrating even more great music in Q next year.”

Launched in 1990, the Q Awards is one of the most unique and exclusive events on the music calendar, honouring the very best of the year’s music and highlighting the most exciting breakthrough acts and saluting true icons of rock and pop. The ceremony is loved by bands and industry figures alike and artists as stellar as The Rolling Stones, Radiohead, Paul McCartney, Kate Bush, U2, Oasis, Bobby Womack, Blur, Coldplay and Lou Reed have attended to collect awards. Last year, Kasabian were the big winners, taking home Best Live Act and Best Act In The World Today and the event set the tone for awards season with Ed Sheeran and Sam Smith preceding Grammy wins with Q Awards for Best Solo Artist and Best New Act respectively. The other winners included Elbow (Best Album), Jamie xx (Best Video), St Vincent (Q Maverick) and Paolo Nutini (Best Track for Iron Sky).

Published on 19 October 2015 by Ben Robinson