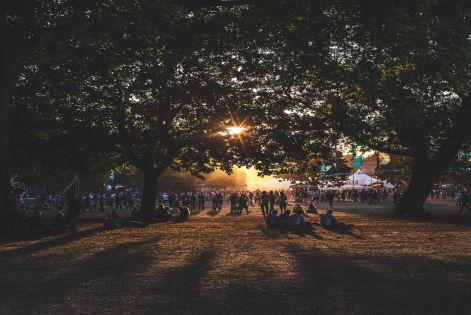 Day one at Lovebox was bought to close after an amazing day of music, fun and sunshine as Rudimental closed the event on Friday.

The clouds cleared and the sunshine burst through as London’s inimitable festival Lovebox 2015 kicked off in its home, Victoria Park… and it was a great start to an even better day.
At the heart of the festival, The Main Stage played host to electric sets from the phenomenal Ella Eyre, the unstoppable Skepta, Mark Ronson with a bombastic performance, and Rudimental, whose surprise guests included Dizzee Rascal made a very special appearance during Love Ain’t Just a Word.
At the elrow stage legendary dance duo Groove Armada made a triumphant return to Lovebox, bringing the magic to a sea of dancing revellers.
Up-and-coming producer SG Lewis opened Thump Presents on The West Stage to an already-energetic crowd, with Hercules & Love Affair, Shadow Child and MK following, and closing with Catz ’N Dogz.
The doors of Despacio, 2manydjs and James Murphy’s super-soundsystem, opened in the afternoon to reveal a custom-built dancefloor escape, complete with parquet flooring, speaker stacks and one giant discoball for a six-hour extravaganza.
Over at The Big Top hosted by FACT Presents The Hydra, Radio 1 DJ B.Traits span the perfect blend of house and techno, while Kaytranada, Dusky and Jimmy Edgar closed the evening.
BBC 1Xtra took over the atmospheric Bamboo Club with an almighty line-up, with rapidly rising MC Novelist drawing a big crowd, and charismatic New York rapper Action Bronson delivering a characteristically buoyant set. Goldie had the crowd dancing into the evening, with a heroic set.
Other highlights included Chris Tofu (AKA the Shangri-La superstar) and Global Local Productions whose Bandstand Remixed stage provided some memorable moments, Little Gay Brother brought some Vegas glamour, the Corona Sunsets Stage shone bright to the sounds of the Balearics, and The Roundhouse and Secret Forum’s Voicebox celebrated the human voice, with poetry slams, storytelling, beatboxing and more.
Rudimental closed the event from the Main Stage with an epic rendition of Feel the Love, bringing the entire site together as one. What a way to end the show.