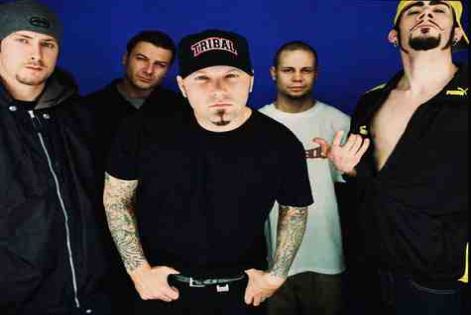 DOWNLOAD FESTIVAL has confirmed a whopping 37 incredible additions to its 2013 line-up, including LIMP BIZKIT, JIMMY EATWORLD, DOWN, KORN, AIRBOURNE, ENTER SHIKARI and CANCER BATS. They join headliners Slipknot, Iron Maiden, and Rammstein, as well as Bullet for My Valentine, Mastodon, Stone Sour,Volbeat and Coal Chamber, for what’s set to be THE biggest weekend in the rock calendar on 14-16 June 2013 at the ‘home of rock’, Donington Park.
Download is pleased to see the return of Fred Durst and co, as Limp Bizkit are confirmed for 2013. This year also sees the return of alternative rockers Jimmy Eat World, Southern metallers Down and nu metal legends Korn, who are coming back to Donington with their founding guitar player Brian ‘Head’ Welch.
Ahead of their 2013 album release, British metalcore band Asking Alexandria will join the likes of Australian hardcore band Parkway Drive, UK tour buddies Motionless in White and raucous residents on the rock scene, Young Guns on the Download bill. Proving that loud, gritty and ranting punk rock is very much alive, Cancer Bats are also confirmed for their fourth appearance at the mighty Download Festival. With their grime style vocals, ferocious riffs and hard-edged British style, Hacktivist will make their Download Festival debut in 2013.
Post hardcore legends Enter Shikari join the incredible line up alongside Five Finger Death Punch whose infamous live sets are not to be missed. Returning to Donington for asecond year in a row, Duff McKagan will debut his new blues rock band Walking Papers who took the Seattle music scene by storm in 2012. Led by the stunning ‘operatic banshee’ that is Jill Janus, the incredible Huntress join the line up alongside sleaze rock Swedish 4 piece Hardcore Superstar. Their live set is set to pack a punch for punk, and Download fans won’t be disappointed with the addition of the mighty Converge to the line up.
Joining the brutal bill are Aussie rockers Airbourne, melodic death metallers Amon Amarth and the aggressively melodic Black Dogs. Critically acclaimed for their recent album ‘Blood’, industrially inspired In this Moment, will be joined by feel good rock ‘n’ rollers HellYeah. Fronted by ex Dragonforcevocalist, I AM I will see ZP Theart introduce his new band to the Donington crowds. Also joining the incredible line up at the ‘spiritual home of rock’ with their heavy beatdown hardcore are Last Witness.
Stylish Swedish rockers The Hives are confirmed, along with Heaven’s Basement who will bring their ferocious rock ‘n’ roll to Donington, Nottingham’s finest Earthtone9 and U.S.rockers 3 Doors Down.
Making their first Download appearance are metalcore rockers Goldsboro. Also added to the bill are classic British metal rockers UFO, Vision of Disorder - known for their intense live shows - the muscular riffing of Texan heavy metallers The Sword, and souful rockers Buffalo Summer.
Weekend and Day tickets for Download 2013 are on sale now and available from www.downloadfestival.co.uk

Published on 16 January 2013 by Wayne Feltham