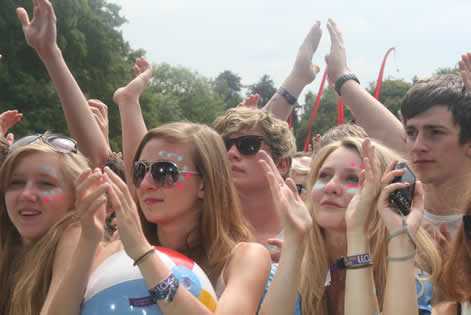 Among the new additions are beautiful songsmiths Bastille - fronted by Dan Smith who won 1st place in the 2012 International Songwriting Competition (Pop / Top 40 category), as voted for by musicians such as Tom Waits, Jeff Beck and Robert Smith, they’ve recently performed at The Great Escape festival to capacity crowds.

The dandy king of psych-pop King Charles returns to Blissfields, following the recent release of his critically acclaimed top 40 album Loveblood and a sold out UK tour.

Dubbed a “one to watch” by MSN in their 2012 poll, Australia’s Me have played live to over 50,000 people since landing in the UK, honing their live show into a stadium-ready performance comparable to Muse, Queen or Green Day.

The haunting Emily And The Woods also return to Blissfields, with festival favorites and BBC championed Jake Bugg, and described by the Guardian as “Caribou-tiful”, Tropics complete this next announcement, with some names still to unveil for Blissfields’ sporting summer.

Blissfields Festival 2012: “Game For It”

The festival has been applauded over the past 11 years for its attention to detail, creativity, family friendly atmosphere and wide-ranging musical and arts bill, but above all, for remaining at an intimate 2,000 capacity, following years of critical praise, stellar live performances from some of the country’s biggest live music acts, and sell-out crowds.

In 2012, Blissfields nod their school cap to the world of sport, offering a dandy revival of the Great British Summertime and a golden age of playground
camaraderie and frivolity. With a full program of sports day shenanigans, a school disco and late night ballyhoo, expect your mischievous tutors to be
on fine form as they guide you through the most fun you’ll have with your chums all year. Hoorah! Hoorah, indeed!

This year you’ll have the opportunity to represent your House, as well as vote for House Captains, once again giving fans of the festival another way to be a part of the makings of the event. Although Blissfields will not be strict on the dress code, they warn that Hall Monitors may have to be
assigned to make sure you are all upholding the Blissfields reputation.

Grab your jolly hockey sticks and catch us round the back of the bike shed for the best “last day of term” style fun you ever had, curated by TrackSuit&Tie.

The team are time-travelling to Blissfields to bring us some of the very best Old Skool 80s inspired Sports Day classics, all with some very alternative twists! Undertake some serious bonding whilst getting in the sack race, flirt your way to victory in the Egg & Spooning, find your feet in the 7-legged challenge and propel yourself into the Space Hopper Long-Jump. Show you’ve got the moves in the Hipster Swingathon, de-feet your opponent in the Sock WrestlingRing and pop yourself silly in the Balloon Fencing Championships!

Exclusively for 2012, you’ll also take on some truly British feats – just make sure you dress up for the Dangerous Dressage in our very own Showjumping Ring, and don’t forget to take time for the incredibly messy Royal Tea!

The grand finale of Blissfields Sports Day will see all four school houses enter the gladiatorial ring of the main arena to fight it out in the Greatest of all British Challenges: The Tug of War.

Prepare to sweat, endure, triumph, fall over (a lot) and WIN, and Blissfields 2012.