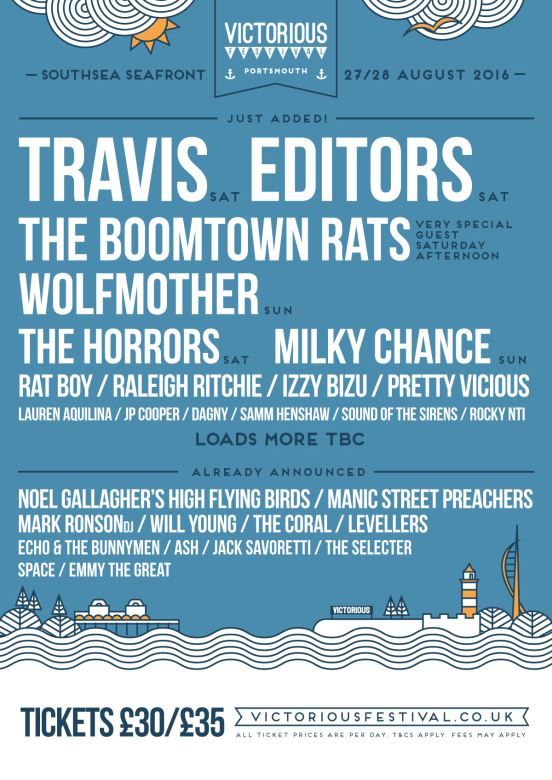 Victorious Festival is delighted to announce their second wave of acts appearing over the August Bank Holiday weekend.

Pioneers of melodic indie, Scottish band, Travis make a fantastic addition to the weekend. Awarded ‘Best Band’ at the BRIT Awards twice and having headlined Glastonbury after the release of their second album ‘The Man Who’ we’re thrilled to welcome them to the festival. The critically acclaimed Editors also join us on the Saturday, adding their own brand of dark indie rock to the festival. These new acts join previously announced headliners Noel Gallagher’s High Flying Birds, Manic Street Preachers and Mark Ronson.

The Irish New Wave band The Boomtown Rats with their renowned lead singer perform as our very special guests on Saturday afternoon. While, Australia’s answer to rock, Wolfmother will be arriving fresh from the recording of their latest album the suitably titled ‘Victorious’.

Adding to a line-up of long established music legends there are some hotly tipped newcomers who are sure to deliver unmissable performances at this years festival. Rat Boy, a teenager from Essex is hailed a great lyricist, delivering an authentic soundtrack of disaffected youth through his unique blend of hip hop. While South London Singer Songwriter Izzy Bizu has gained a long list of superstar supporters having supported Sam Smith, Rudimental and Foxes on their latest tours. Last but not least, JP Cooper, an up and coming dreadlocked singer packed full of soul is sure to deliver a remarkable set.

Last year Victorious Festival welcomed 100,000 visitors to its beautiful beachside location on Southsea Seafront and were finalists in the UK Festival Awards for ‘Best Family Festival’ and ‘Best Major Festival’. With it’s incredible line up, huge free kids arena & family friendly atmosphere Victorious continues to be one of the best value festivals in the UK this summer with tickets currently costing just £30 a day.