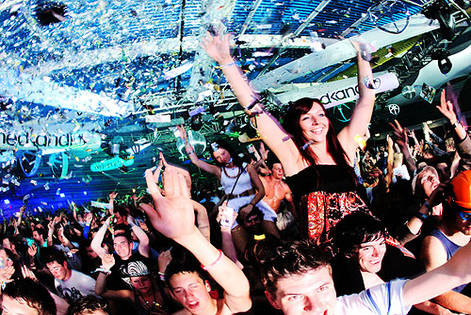 Run to the Sun (RttS) is gearing up for its 25th anniversary event and is expecting record numbers to mark this momentous occasion.

Once again Trevelgue Holiday Park will be transformed into a festival site as it opens its doors for one of the UK’s largest VW, Custom Car and Dance Festivals on the last May Bank Holiday weekend (27-30 May)

This year’s event will house a massive 6 arena’s. The Main Arena, the Comedy and Live Music Arena, The Silent Disco, The Acoustic Sessions, The Dub-Step Arena and The Unsigned Sessions.

The Main Arena line-up has been confirmed and features some of the biggest names on the dance scene including Andy C, Grooverider, Anne Savage, BK and Eddie Halliwell to name just a few.

The Comedy and Live Music arena will stage some of the finest up and coming acts on the comedy circuit plus some of the best local bands.

The Silent Disco is exactly that. Grab your headphones on the way in, choose your music from a variety of channels and dance the night away to what you want to hear. And no need to shout your order at the bar man either!

The Acoustic Sessions is definitely somewhere to chill-out and enjoy an ice cold beer, its mellow, relaxed and a lovely place to spend an afternoon listening to live, acoustic music. The clues in the title really.

As always the Show ‘n’ Shine is a huge attraction to all you car enthusiasts out there and is the perfect place to show off your pride and joy (your car that is!!). With cash prizes up for grabs it’s worth that extra elbow grease to get that engine gleaming!