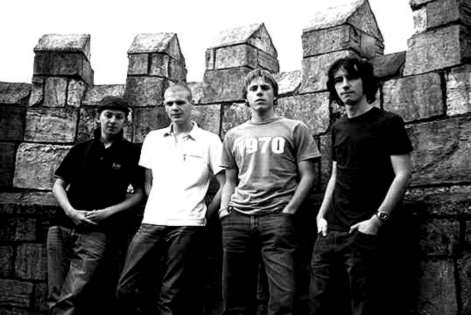 With the clock ticking down until Get Loaded in the Park unleashes itself on the festival circuit once again, with a further five artists added to the already huge lineup.

Coming straight from a huge sell out show at The Coronet last week, The Rifles bring a new look band to Get Loaded in the Park. With a third studio album soon to hit our airwaves, Chingford’s finest look set for an absolutely massive summer with the first chapter written on 11th June.
In the Gigwise Arena, Hot Chip’s Alexis Taylor bring his other band About Group to Clapham Common for an exclusive and rare appearance. As a Mercury prize-nominated pop star, Alexis has been responsible for bringing geekery to the dancefloor and will be showcasing tracks from About Group’s second album.
New Zealand born, London resident Connan Mockasin brings his delightful, slanted and enchanted world to Get Loaded in the Park. He has recently been creating a stir on the blogs with his track ‘Dolphin’ and will be bringing his unique blend of psychedelic pop to the party.
As the new act from former Les Incompétents / Lion.Ox.Eagle.Man member Frederick Macpherson, Spector categorically tick the box labelled ‘raw energy.’ A vigorous and ludicrously good-looking five piece, they fuse rawkus energy and effortless panache.
Last but by no means least, Six Nation State are a UK based four-piece who in the past three years have supported bands such as Babyshambles. With their debut album set for release this year we’re delighted to have them on board. “For two years we lived on Clapham common so coming to play Get Loaded is a little special for us. It's going to be a great start to the summer festivals!" Gerry del Guercio (Six Nation State)
Other Highlights:
Having stole the show at the recent Camden Crawl, Get Loaded headliners Razorlight return to the Capital for another spectacular performance. Their set at the Crawl featured new tracks alongside the classics we all know and love and resulted in Johnny Borrell telling NME how he felt Razorlight's return "feels like a new band.”