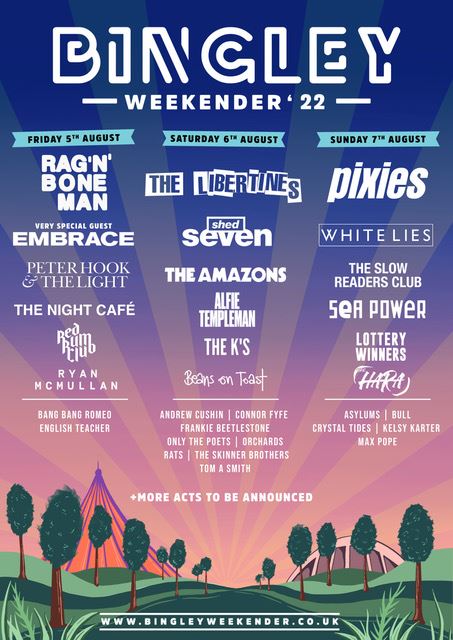 Taking place Friday 5th August to Sunday 7th August at Bradford and Bingley Sports Club, the festival has confirmed that the likes of indie stalwarts Shed Seven, Liverpool's alternative/indie sextet Red Rum Club, Sea Power and rockers The K's have all been added to the bill.

This follows news that The Libertines, who are currently celebrating the 20th anniversary of their debut album 'Up The Bracket', Rag 'n' Bone Man, indie legends Pixies, who have just released 'Human Crime' their first single in two years, and Yorkshire local heroes Embrace, will all still perform at the 2022 gathering. Other previously announced acts include Peter Hook & The Light, The Amazons, White Lies and The Slow Readers Club.

With festival-friendly hits such as “Chasing Rainbows,” “Disco Down” and “Getting Better”, Shed Seven are an English alternative rock band, formed in York in 1990, that need little introduction. One of the major groups which contributed to the Britpop music scene of the 1990s, they continue to write, record and release music over thirty years later.

Formed in early 2016, Red Rum Club are a sextet from Liverpool, channeling ‘Tarantino-esque’ wild western vibes with the help of a solitary trumpet. Amongst the 80s Liverpool influence they deliver a modern twist of poetic yet catchy lyrics combined with melodies that blend to create the sound that is unmistakably, Red Rum Club.

Since forming, Red Rum Club have toured the UK extensively, booking every show themselves and adopting a strong DIY work ethic which has seen them build up an ever-expanding fanbase- a measure of their popularity is that they recently sold out the 02 Academy main room in Liverpool to 1200 fans.

Meanwhile, Sea Power, previously known as British Sea Power, are an English alternative rock band with a fiercely loyal following. The band have just released their eighth album 'Everything Was Forever', which entered the charts at number four, managing to hold Ed Sheeran off the top spot for most of the week.

The wide-ranging nature of the band's material has led critics to liken their sound to a variety of groups, from The Cure and Joy Division to Pixies and Arcade Fire.

The band are famed for their live performances and the unusual lyrical content of their songs which will make for a welcome addition to the Bingley Weekender 2022 line-up.

Other notable names set to perform at Bingley Weekender 2022 include The Amazons, one of the UK’s largest indie-rock breakthrough acts of the last few years, Peter Hook and The Light - playing tracks from Hook’s iconic previous bands Joy Division and New Order - and English post-punk band White Lies.

For more information about the new line-up visit: https://bingleyweekender.co.uk

To purchase tickets, head to: https://bingleyweekender.ticketline.co.uk