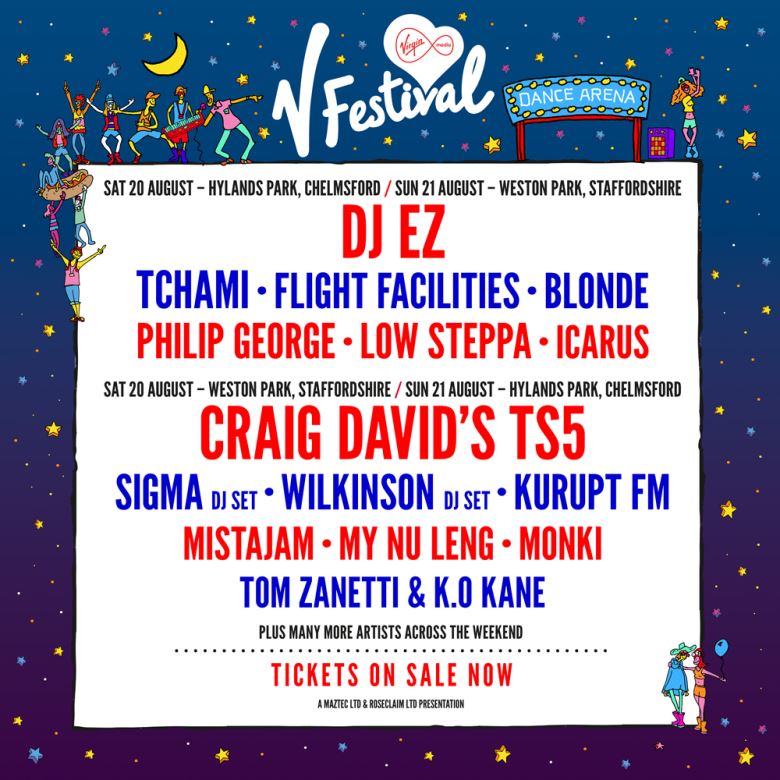 V Festival 2016, sponsored by Virgin Media, has today revealed its stellar dance line up that will take over the Dance Arena across 20th and 21st August 2016.

The electric line up includes a hotly anticipated performance from UK garage favourite, Craig David TS5. The multi-platinum star will bring a taste of his exclusive Miami TS5 radio shows and club nights to the festival. Also performing is garage music extraordinaire DJ EZ who will both take to the decks to pump out the tunes and get the crowds going.

Heading to the Dance Arena just ahead of them will be two of the world’s biggest drum and bass acts, Sigma and Wilkinson, who are set to be crowd favourites with their incredible DJ sets and banging beats.

Two of the UK’s biggest home grown dance hit makers, Blonde and Philip George, will pull the crowds in to the Dance Arena and set an electric atmosphere with their incredible set lists including UK top 10 chart singles ‘All Cried Out’ and ‘Wish You Were Mine’.

BBC Radio 1 DJs, MistaJam and Monki, will both play second sets at the festival after MistaJam plays Chelmsford and Monki travels to Staffordshire on the Friday evening for their first appearance on the BBC Radio 1 Summer of Dance stage. Their second appearances will then take place in the popular dance arena across the Saturday and Sunday schedule.

KuruptFM, My Nu Leng, Low Steppa, Icarus, Tom Zanetti & K.O Kane all round off what is set to be an amazing weekend in the Dance Arena.