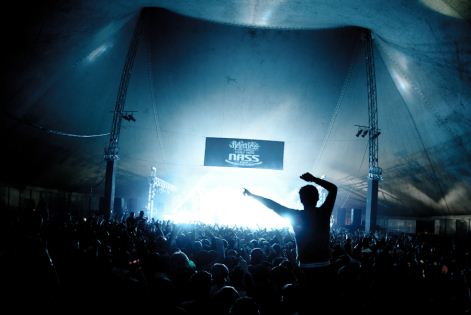 NASS today announces the line ups for two more takeovers and with 4 more stages including the Main Stage to be announced NASS 2013 is hotting up.

NASS is proud to announce the Ram Records Takeover. With over 20 years in the game Ram need no introduction and 2012 was another massive year for the label. Awards for Best Label, Producers, DJ, Single and Video are just a few of the countless reasons NASS is proud to welcome Ram. The boss, Andy C will play a 2hr set and Ram will introduce new signings Calyx & Teebee and Wilkinson. Culture Shock and Mind Vortex round up one of the most anticipated stage line ups ever at NASS.
Next up is Black Butter Records. Voted best small label of 2012 and home to Rudimental this crew is set to rule and with their roster there is nothing small about them! First up is Gorgon City, the new collaborative project from Foamo and RackNRuin. Polished, powerful and party minded, Gorgon City have big radio backing and will be one of the hottest acts this year. Kidnap Kid is next and is now one of the top names in Future Bass. Once again, big name support is promising a huge 2013 for this tech young producer. Bristol local Woz joined Black Butter after winning the Territory remix competition. Unique, fresh and so well produced you know Woz when you hear him. Last for now is Noisses, one of the most innovative DJ’s and producers in the UK scene. Black Butter will announce more in the coming days but it’s already too good!
The line up so far represents just 3 individual stage lines ups. Plenty more to come from NASS 2013.
NASS is a three day festival bringing together 15,000 lovers of music, skate, bmx and the lifestyle that surround them. 7 music stages from dubstep and DnB to punk and rock and purpose built skate parks are constructed to celebrate what we love.
NASS takes place from 11-13th July at the Bath and West Showground. Tickets are on sale at www.nassfestival.com . New for 2013 is Thursday entry offering the chance to beat the crowds, pick the best camping spot and enjoy an extra night of NASS awesomeness. These tickets are limited and there is also a deposit system in place.

Published on 07 February 2013 by Wayne Feltham