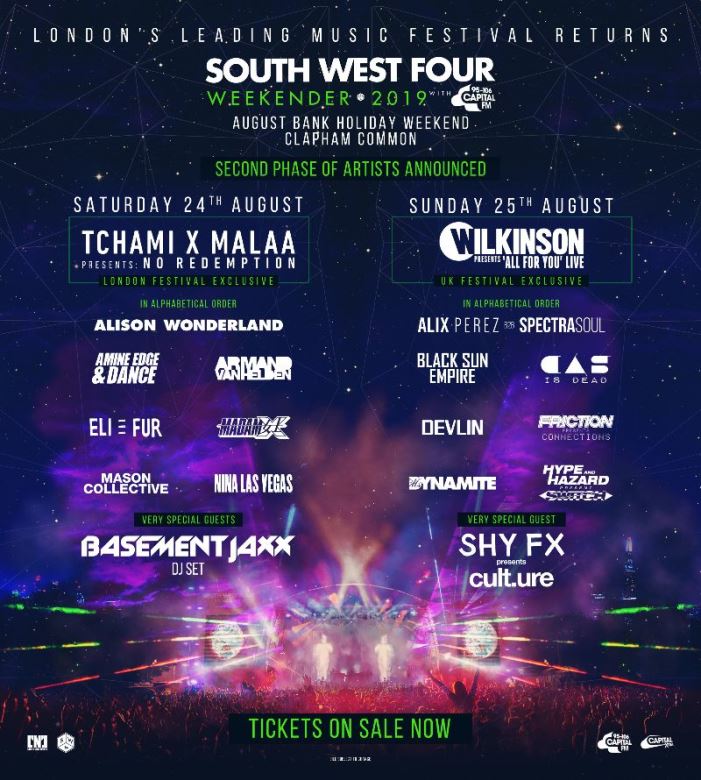 Following a sensational sold out 15th anniversary edition in 2018, London’s South West Four returns to Clapham Common in 2019, delivering another stellar line-up to the capital, with a billing which already includes the likes of 3 x DJ Mag ‘Number #1 DJ in the World’ winner Martin Garrix, London-born rapper Tinie Tempah, and legendary group, The Prodigy.

Joining the August Bank Holiday festival line up will be, ‘Pardon My French’ duo Tchami & Malaa who will be bringing their gospel-based ‘No Redemption’ concept to South London for a performance on Saturday. They'll be joined by a host of the biggest talent in electronic music, including US-trap mogul Alison Wonderland, Amine Edge & Dance, and legendary house figure, Armand Van Helden. With the likes of Eli & Fur, Madam X, Mason Collective, and Nina Las Vegas also added to the opening day of the 2019 festival, Saturday will also feature very special guests Basement Jaxx, with the legendary group following up their scintillating 2018 performance at the same event.

Sunday will mark a UK exclusive; Drum & Bass maestro Wilkinson will deliver his ‘All For You’ project to the Clapham site, an innovative live concept designed to showcase the producer’s most thunderous tones in. With a very special b2b between Alix Perez and Spectrasoul also bringing vibrancy to the final day of the 2019 event, the duo will also be joined by the likes of Black Sun Empire, masked UK hip hop enigma Casisdead, rapper Devlin, and a special live performance from the Mercury Prize winning pop queen, Ms Dynamite across the course of Sunday. Friction will be bringing his ‘Connections’ brand to the party people of Clapham following his recent album release of the same name, Hype & Hazard are also sure to get crowds jumping in preparation for the hotly awaited Shy FX presents Cul.Ture set; a fitting finale for Sunday’s bass-heavy sounds

With general sale tickets now available, South West Four 2019 is shaping up as the biggest SW4 so far! Further announcements are still to come.

+ MANY MORE TO BE  ACROSS TEN STAGES

Published on 05 February 2019 by Wayne Feltham