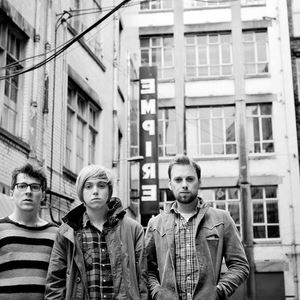 - Murray MacLeod (Lead Vocals & Guitar) - Jordan Smith (Backing Vocals & Bass) - Tom Heron (Backing Vocals & Drums) -
In the sleepy town of Beth Page, New Jersey, THE XCERTS may as well have been The Beatles – British AND in a band?! It's true what they say: Americans LOVE that kind of thing.
Staying in a dorm-like hotel room with a cosy kitchenette for two weeks and recording in a basement studio, The Xcerts' second album had been coming together for around nine months. But a mere four weeks had passed since the band found out they'd be recording it with the mighty Mike Sapone (Brand New, Taking Back Sunday, Public Enemy).
Their debut, 'In The Cold Wind We Smile', was recorded with Dave Eringa (Idlewild – '100 Broken Windows') in Wales, and secured the band supports with Funeral For A Friend, My Vitriol, Fightstar, Feeder and Idlewild, and was greeted as warmly by indie-pop fans as fans of heavy rock. Labeling themselves 'distorted pop', they had a combination of sweetness and angst akin to a colder, darker, cosier Jimmy Eat World. This time around, though, The Xcerts are a much more ferocious beast – and they're happy to admit that not everyone's going to like it.
“If we didn't sound different, I'd be worried,” frontman Murray Macleod explains. The first album was – as for most new bands – something of a 'greatest hits' from the band's early years, when they were still finding their feet. This time, the album was almost entirely written in a six-week break between tours and as a result paints a much more vibrant picture; a single body of work that makes sense; a proper album that it would seem blasphemous to shuffle.
The influences have changed too. “There are certain records that we're all really in to that have a similar sound – a balance of raw emotion and good production. ‘In Utero’ by Nirvana, ‘Pinkerton’ by Weezer, 'Either/Or' by Elliot Smith, ‘The Devil And God Are Raging Inside Me’ by Brand New, ‘Nebraska’ by Bruce Springsteen and ‘For Emma Forever Ago’ by Bon Iver. That's pretty much exactly how we wanted this record to sound.”
The result is something certainly more akin to the louder of the aforementioned bands. In fact, The Xcerts had to cancel shows scheduled for the week of their return from NY on account of Murray having screamed his throat to pieces in the studio. There are quieter, more tender moments – which 'Aberdeen 1987' from the first album showed they can do brilliantly – but this record is no soft touch. And the Springsteen curveball comes in to play on the big sing-along chorus of 'Belane' – a song that miraculously makes sense on an otherwise unconventional record.
“There's a lot of experimentation on this album,” says Macleod, who credits Sapone for encouraging and cultivating the creative process. “He came up with crazy ideas, and watching him come out with them, I didn't feel worried about throwing an idea into the hat. It was almost like Mike was the fourth member of the band – there's parts that would never happened, had we not worked with Mike.”
Lead single, 'Slackerpop' is a prime example. The original demo was a mere ninety seconds long until Sapone insisted The Xcerts “find the middle eight”. What they found was an intense and unforgiving middle eight that makes the song.
“We'll be more suited for a slightly heavier bill now,” Murray says, unsure of where exactly 'Scatterbrain' fits in the current musical landscape. “It's really 90s influenced, but Mike's made it a really forward thinking album, which is something we definitely needed.”
Murray sums up the record as “the sweet sound of a young man losing his mind”. It's a bit bewildering, overwhelming and even a little unsettling, becoming more clear and clearly troubled with every listen.
“This is an album lover’s album for the fans of the band. It’s not about a particular track or single and should be listened too as an entire body of work with an open mind. We hope everyone falls in love with it like we have.”
The Xcerts debut album ‘In The Cold Wind We Smile’ is out now on Xtra Mile Recordings! Here’s what the press had to say:
“Charged with youthful hope and exuberance, every riff and anthemic chorus points to a bright future for these talented lads." - Kerrang! 4/5
“...this debut is inch-perfect, merging heartstring-tugging delicacy with buoyant distortion... If you're searching for pop with balls but no bullshit, look no further.” - Rock Sound 8/10
"'In The Cold Wind We Smile' is a triumphant, life-affirming classic" - Big Cheese 5/5