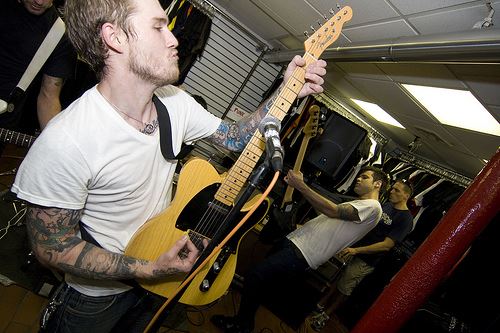 The Gaslight Anthem is a punk band from New Brunswick, New Jersey. Since forming in 2006, they have released four full-length albums and an EP. They were described by Kerrang! magazine as “the best new band you’ll hear in 2008.” The lineup consists of Brian Fallon (vocals and guitar), Alex Levine (bass), Benny Horowitz (drums), and Alex Rosamilia (guitar).
The Gaslight Anthem’s music embraces many elements of blues, classic rock, and punk rock. The band has described their sound as “Bruce Springsteen singing for a Cure cover band, with a tinge more aggression.” The group’s fondness for Springsteen, a significant influence on their music, is celebrated by fans and critics alike. Representative of such views, one critic wrote, “The Gaslight Anthem are like something out of speculative fiction: this is what pop music would be if Springsteen hadn’t listened to his producer, let the Ramones record ‘Hungry Heart,’ and launched the C.B.G.B.’ers into megastardom.”
The band released its first LP, Sink or Swim, in 2007 through XOXO Records, and toured with many reputable bands, including Against Me!, The Draft, Dead to Me, and Fake Problems.
The Gaslight Anthem’s second release, a 4-song EP entitled Señor and the Queen, was released on January 29th, 2008 by Sabot Productions.
Their second full-length, The ‘59 Sound, was released on August 19, 2008 on Side One Dummy Records. The album debuted at #70 on the Billboard top 200. It was produced by Ted Hutt, who has produced albums for The Bouncing Souls, Flogging Molly, and MxPx.
On August 6, 2008 they became the first band to ever appear on the cover of Kerrang! magazine without the publication having previously written a single word about them.
In Fall 2008, the band toured with Rise Against, Alkaline Trio, and Thrice.
On December 9, 2008, the Gaslight Anthem made their television debut on Late Night with Conan O’Brien, performing the song the “The ‘59 Sound.” On January 30, 2009, they appeared on The Late Show with David Letterman, again playing “The ‘59 Sound.”
Their third full-length, American Slang, was released on June 15, 2010, on Side One Dummy Records. The Bring It On Songfacts reports that it finds the band moving away from the fictional lyrics and '50s-inspired sound of their previous records.
In 2010 they appeared on the main stage at the Reading and Leeds festivals in the UK along with Arcade Fire, The Libertines and Modest Mouse.
Their fourth full-length, Handwritten was released on July 23, 2012 in the UK, and on July 24 in the US. The lead single, "45", was aired for the first time worldwide as Zane Lowe's Hottest Record in the World on April 30, 2012 on BBC Radio 1 and was released on iTunes on May 8, 2012. Handwritten was called by The Rolling Stone their "biggest sounding, most straightforward album"