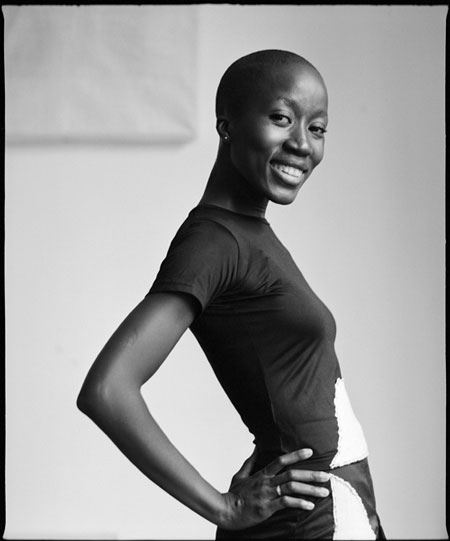 Rokia Traoré (born 24th January 1974) is an award-winning Malian singer, songwriter, and guitarist.
Traoré was born in Kolokani, Mali as a member of the Bambara ethnic group. As her father was a diplomat, she travelled widely in her youth travelling to Algeria, Saudi Arabia, France and Belgium. As a result of this travel, she was exposed to a wide variety of influences.
The Bambara also had a tradition of griot performing at weddings although members of the nobility such as Traoré are discouraged from performing as musicians. Traoré attended lycée in Mali when her father was stationed in Brussels and started performing publicly. As well as guitar she plays ngoni (lute) and balafon.
In 1997 she linked with Mali musician Ali Farka Touré which raised her profile. She won a Radio France Internationale prize as African discovery of 1997, an honor previously won by Mali's Habib Koité in 1993.
Her first album Mouneïssa (Label Bleu), released in late 1997 in Mali and 1998 in Europe, was acclaimed for its fresh treatment and unqualifiable combinations of several Malian music traditions such as her use of the ngoni and the balafon. It sold over 40,000 copies in Europe.
In 2000, her second album Wanita was released. Traoré wrote and arranged the whole album. The album was widely acclaimed with the New York Times nominating it as one of its critics' albums of the year.
Her 2003 album Bowmboï has two tracks recorded with the Kronos Quartet but still sung in the Bambara language, and was awarded the prestigious BBC 3 World Music Award. As of 2005, she has been nominated three times for this award.
In 2008, her latest album "Tchamantché" was released.
ADDITIONAL READING:
Singer, songwriter, and multi-instrumentalist Rokia Traoré’s Beautiful Africa will be released on April 1, 2013, by Nonesuch Records in France and April 8, 2013 in Europe, Canada and USA. The record was produced by English musician John Parish (PJ Harvey, Eels, Sparklehorse) and recorded at Toybox Studios in Bristol, UK. Its lyrics are sung in the Malian–born Traoré’s native languages of French and Bambara, as well as some English.
Pitchfork described Traoré’s most recent record, 2009’s Tchamantché, as “a guitar album of a particularly understated bent...hauntingly spare yet ridiculously well-defined, the timbre and tone of every string presented in perfect resolution.” And the BBC World Service called it “One of the best albums of the year. An absolute stunner.” Tchamantché also won a Victoires de la Musique (the equivalent of a Grammy Award in France) and a Songlines Artist of the Year Award for Traoré.
The daughter of a Malian diplomat who was posted to the US, Europe, and the Middle East, Traoré studied sociology in Brussels before embarking on her musical career. Although based in Bamako, Traoré has, for her son’s safety, temporarily relocated to Paris due to the current conflict in Mali. Her music draws upon her homeland’s traditions as well as the European and American rock and pop she has listened to throughout her life.
Traoré has explored a breadth of directions in her career. She recently collaborated with Nobel Prize–winning novelist Toni Morrison and MacArthur “Genius” Grant winning director Peter Sellars on the theater piece Desdemona. The piece premiered in Vienna in the summer of 2011 and received its New York premiere at Lincoln Center that fall; its UK premiere was at the Barbican in London in the summer of 2012. The Guardian called it “a remarkable, challenging and bravely original new work.”
The Barbican also produced a three-night series of shows by Traoré that summer, entitled Donguili – Donke – Damou (Sing – Dance – Dream). For the Sing evening, held at the Barbican, Traoré and mandolinist/former Led Zeppelin bassist John Paul Jones joined young musicians from Traoré’s training program in Mali, Foundation Passerelle. Dance, at the Village Underground rock club, featured Traoré and her band playing the high-energy, danceable shows she is well known for—joined by Parish on guitar. And for Dream, which took place in an East End theater, Traoré narrated an ancient Malian tale, with occasional musical interludes. Australia’s Sydney Festival also presented Donguili – Donke – Damou in January 2013. Traoré was awarded the inaugural Roskilde Festival World Music Award in 2009 for her work with Foundation Passerelle.
In the autumn of 2012, Traoré joined Damon Albarn’s UK train tour Africa Express, performing scheduled concerts in Middlesbrough, Glasgow, Manchester, Cardiff, Bristol, and London as well as pop-up performances at railway stations, schools, factories, offices, shopping centers, and private homes. Other musicians on the tour included John Paul Jones, Amadou Bagayoko, Baaba Maal, and Paul McCartney.