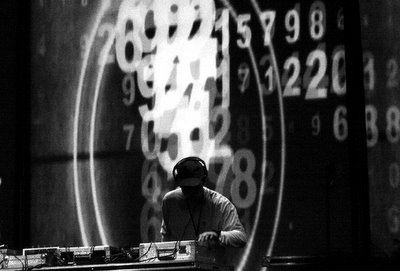 Considered a prominent figure in the development of instrumental hip-hop, DJ Shadow (real name Josh Davis) has proven himself with groundbreaking, genre-defining solo output on such respected labels as Solesides and Mo' Wax.
DJ Shadow spent his teenage years in Davis, California and was a DJ at the community radio station KDVS. During his time as a radio disc jockey, DJ Shadow was significant in developing the experimental instrumental hip-hop style associated with the California-based Solesides record label. His early singles for the label, including In/Flux and Lost and Found (S.F.L.), were genre-bending works of art merging elements of funk, rock, hip-hop, ambient, jazz, soul, and used-bin found records. DJ Shadow is often cited as a leading creator of trip-hop, though this is a label he strongly contests.
Although he previously released a couple of original works (during 1991-1992 for Hollywood Records) by the time Mo' Wax's James Lavelle contacted him about releasing In/Flux on the fledgling imprint, it wasn't until his distribution association with Mo' Wax that his sound began to mature and cohere.
Shadow's first full-length work, Endtroducing....., was released in late 1996 to immense critical acclaim. Following the success of this album, he acted as a shadow producer for Rage Against The Machine for their album, Evil Empire. It is said he influenced the solo on their song "Bulls On Parade". Endtroducing... made the Guinness World Records book for "First Completely Sampled Album" in 2001. Preemptive Strike, a compilation of early singles, followed in early 1998. Later that year, Shadow produced tracks for Psyence Fiction, the debut album by U.N.K.L.E., a long-time Mo' Wax production team that gained superstar guests including Thom Yorke (of Radiohead), Richard Ashcroft (of The Verve), Mike D (of the Beastie Boys) and others. His next project came in 1999, with the transformation of Solesides into a new label, Quannum Projects. Nearly six years after his debut production album, his second album, The Private Press, was released in June 2002. In the same year, the movie "Scratch" (2001, Doug Pray) was released to DVD with DJ Shadow appearing several times throughout the movie.
The documentary films "Dark Days" and "Wisconsin Death Trip" feature music of DJ Shadow while "Scratch" features an interview and more music.
DJ Shadow has also collaborated with fellow artist Cut Chemist. Together they have made two CDs entitled Brainfreeze and Product Placement. These albums fuse jazz, funk, and soul in the framework of a cohesive concept. The second of these (Product Placement) followed a very similar pattern to the first, but using remixes/other versions of the songs in roughly the same order.
In the year 2004, Shadow released his feature length DVD, In Tune and On Time. The DVD features a live performance in London, emphasizing intricate visuals.
In 2005, Shadow released a Deluxe Edition of his first album, Endtroducing.... and a new album, titled "The Outsider" in 2006.
While Shadow's earlier works, especially 'Endtroducing.....', are known for their innovation in genres such as hip-hop, ambient, and trip-hop, his fourth full length album, The Outsider, had several tracks dedicated to Hyphy. This decision has been controversial, leaving many fans feeling alienated. DJ Shadow addressed this point in an August, 2006 interview, in which stated, "Repeat Endtroducing over and over again? That was never, ever in the game plan. Fuck that. So I think it's time for certain fans to decide if they are fans of the album, or the artist."
Also in 2005, Brian Udelhofen began work on the Shadow Percussion Project, an attempt to adapt some of the tracks from Endtroducing... for a live performance group. The result was largely successful and well-received by DJ Shadow himself.
In 2007 DJ Shadow was contacted by the Hollywood Bowl to do a show featuring Freeze with Cut Chemist. However, not wanting to repeat old material DJ Shadow and Cut Chemist came up with a whole new routine entitled The Hard Sell. In 2007 and 2008 they went on The Hard Sell tour and were accompanied on stage by two large video screens with visuals created for the tour.
Discography
Solo Albums
* 1996 - Endtroducing.....
* 1998 - Preemptive Strike
* 2000 - Dark Days
* 2002 - The Private Press
* 2003 - The Private Repress (Japanese Remix Album)
* 2004 - In Tune and On Time
* 2005 - Endtroducing... (2xCD Deluxe Edition)
* 2006 - The Outsider
* 2007 - The 4-Track Era Vol.1 Best of the KMEL Mixes
* 2007 - The 4-Track Era Vol.2 Best of the Remixes and Megamixes (1990-1992)
* 2011 - The Less You Know, the Better
with Q Bert
* 1997 - Camel Bobsled Race (Q-Bert Mega Mix) CD-EP
with UNKLE
* 1998 - Psyence Fiction
with Cut Chemist
* 1999 - Brainfreeze
* 2001 - Product Placement
* 2004 - Product Placement on Tour
* 2005 - Freeze
* 2008 - The Hard Sell
with Dan The Automator
* 1998 - Bombay the Hard Way: Guns, Cars and Sitars