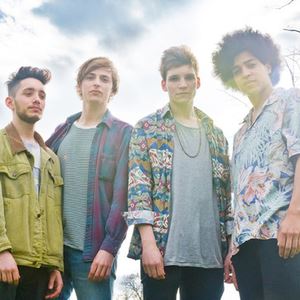 When Childhood was formed back in 2012, the band had no songs and, according to frontman Ben Romans-Hopcraft, had never even played a single note. Having met fellow founder & guitarist Leo Dobsen at Nottingham University, the band were quickly joined by Dan Salamons on bass and their first single ‘Blue Velvet’, erupted onto the scene, an impressive debut and an exciting sign of what was to come. With the addition of Jonny Williams on drums, the band followed up with their second single 'Solemn Skies' on 10 June 2013 on House Anxiety / Marathon Artists and cemented themselves as a certified hot ticket.
Lush, sonically-infused, scarily melodic, boisterous and brimming with a dreamy wanderlust that set them apart from the rest of the new bands on the scene, it set the tone for what was to follow; their fantastic debut album, ‘Lacuna’, recorded with legendary South London producer Dan Carey. Exhibiting the band’s undeniably varied influences and tastes, it highlights what can only be described as a super exciting new talent, prepared to explore and experiment, all the while managing to carve out their individuality. Resist them at your peril.
But there are many more artists with this name:
1) Story: Childhood was a nu metal band from Hungary, which was active between 2001-2003. In such a short period of time they recorded one demo record, played at all clubs in Budapest (capital of Hungary), achieved two headliner spots on a stage at Sziget Festival, one of the greatest European summer music festivals. In 2003, after the second Sziget appearance and right before a tour with some of the best nu metal acts of the time in Hungary the band split up because of personal issues.
Afterlife: Roni (guitar) was singer of Bla (www.blamusic.hu), GerGo (dj) appeared also in Bla and made fame with the ska band Honeyball (www.honeyball.hu), Gabor (singer) had a drum’n’bass project and currently plays with a hc metal band, Attila (percussion) plays and tours with jazz bands, Dave (drums) and Jazz (bass) did not have further bands.
2) CHILDHOOD is a group composed by Mitsuhiro Mori（森光弘） and Keisuke Usuda（臼田圭介） from Japan.
Explaining “Handflute” & “CHILDHOOD”:
“Handflute” is a kind of musical instrument played on the hands. The hands
are placed together as if praying. After making a space inside the gripped
hands, one blows into the gap between the two thumbs. It is similar to
making a tone by blowing over the top of an open bottle.
At first, only a simple piping sound can be produced with this technique.
However, by increasing or decreasing the size of the space inside the hands,
the tone can be controlled. Gradually, with a lot of practice, it becomes
possible to produce melodies. Mastering this technique takes a lot of skill
and practice, so very few people have this rare talent.
Mitsuhiro Mori（森光弘）
When Mitsuhiro Mori was a young boy, his father taught him to emulate an
owl’s hooting by blowing into his cupped hands. By playing with this
technique he moved from mimicking owl cries to playing melodies.
Mitsuhiro has now mastered the ability to produce tones with a range of
three octaves, vibrato and portamento. With tunes that soothe the soul and
amazing technical mastery, Mitsuhiro can play a wide variety of music, from
classic to pop, that appeals to people of all ages.
His dream is to continue travelling, performing music from many countries
and making friends all over the world.
Keisuke Usuda（臼田圭介）
Keisuke plays the piano as well as composing original music for CHILDHOOD.
He met Mitsuhiro when they were studying at music school. He was very
impressed with Mitsuhiro’s musical talent and decided to work with him.
This is how CHILDHOOD was formed.
3) There is another band called Childhood. If you have any information on this band, please add to the description here. They are/were a jangle pop group, probably from the eighties. They have album (or single?) titled “September” , with tracks including : texas, she said, boy, what makes life so beautiful anyway. Their demo tracks include : the war within, tears come crash,reading their faces, a miracle, in your eyes, in tears, if i fall, childhood, between the times, belief, away, age.