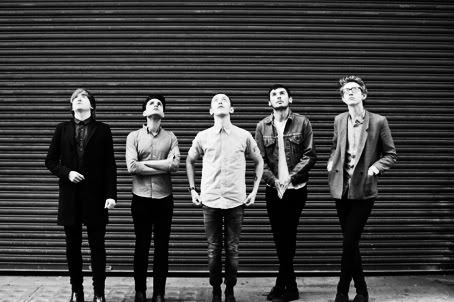 Chapel Club were a London, UK post-punk / shoegaze quintet: Lewis Bowman (vocals), Michael Hibbert (guitar & keyboards), Alex Parry (guitar), Liam Arklie (bass guitar) & Rich Mitchell (drums). Formed in the church of St Luke Old Street's shadow (summer 2006), where - twice or thrice weekly - after nearby rehearsals, the five gathered to drink & discuss the band's name.
“Like everything else with us,” says Michael, “the name was unplanned and ill-defined in the beginning. We didn’t start out with one and we’d go ages without bringing it up. But on the occasions when we did talk about it down in the churchyard, there was a lot of disagreement.” Eventually, the answer came from the site of the discussions itself, and the embryonic band became Chapel Club.
The band’s founder, Michael grew up in the depths of Essex before moving to the capital. He spent some time playing in other people’s bands and often lent his abilities to friends’ projects, but his real focus was always on doing something much more personal. He began collecting ideas and inspiration – anything from vintage natural history illustrations and stop-motion film shorts to guitar lines, drum samples and snatches of melody – with a vague notion that, out of this ephemera, a band might one day be born.
When Michael met Liam (bass) and Liam introduced Alex (guitar), his best friend since junior school days in Swindon, the core parts were in place. What the band needed now was a drummer and a frontman – then the machine could start to move. Leeds-born Rich (drums) and Londoner Lewis (vocals) provided the missing pieces. Each was recommended by mutual friends and fitted in instantly with the existing trio’s tastes, temperaments and (importantly) savage sense of humour: in no time, the five were hanging out together, writing, rehearsing and trying to work out what form their strange new creation would take. For Lewis, who had never been in bands before and now found himself singing and songwriting for the first time, it was an intimidating experience.
In the end, it took very little time for the defining elements of Chapel Club’s signature sound to take shape: heavy drama from the guitars, a rhythm section as tight as a hanged man’s gullet, melodic intricacies aplenty and a vocal that crooned and swooned its way through stories of lust, love and loss like a modern-day Jacques Brel. It soon became apparent to all involved – as well as the growing legion of admirers the band picked up from early gigs and their first MySpace page – that Chapel Club were different from other bands. First, there was the music: they didn’t quite fit any of the existing stereotypes.
“I dread that question, ‘Who do you sound like?’” says Lewis. “Not because it’s a bad question, it’s natural enough for someone to ask that. I’d just love to have a quick and accurate answer. But I can’t think of anyone we sound like, especially live. I end up reeling off influences from Deerhunter and New Order to the Bad Seeds, Scott Walker and Chet Baker – and leaving the person who asked more confused than they were to begin with.”
The second thing that set the nascent Chapel Club apart was the words: Lewis drew on his love of wordsmiths like Ted Hughes, Mikhail Bulgakov, R.S. Thomas, Frank O’Hara, Ernest Hemingway and Knut Hamsun to create lyrics that flitted from the vivid and vernacular (the lovers’ argument of O Maybe I) or darkly poetic (the pained paean to desire that is Machine Music) to the acutely descriptive (After the Flood) and downright philosophical (Paper Thin).
The end result? Chapel Club aren’t run of the mill. They have their own formula, one they arrived at by chance and which they want to remain something of a mystery, in case they jinx it. More than anything else though, they are a band best described not in relation to other bands or musical precedents but in relation to the events, experiences and sentiments at the heart of their songs: sex, love, grief, frustration, pride, power, jealousy, even (in The Shore) the desire for the comforts of religious faith in a mind that’s far too cynical ever to accept the possibility of God.
Head down to one of Chapel Club’s fortnightly London events and you’ll most likely find yourself in an offbeat location – an ‘acid Rasta’ West Indian pub perhaps, or a disused gallery space – mingling with a fun-loving, forward-thinking crowd and watching a magical, moody, incredibly loud live show that will leave you by turns stunned, enraptured, anguished, awestruck and overwhelmed. ‘Intense’ is the word on a lot of listeners’ lips, and after two years of ensuring their musical abilities match their ambitions, you won’t hear Chapel Club complaining about that.
The band split in October 2013 after the release of their second album, 'Good Together'.
Sites: MusicBrainz.