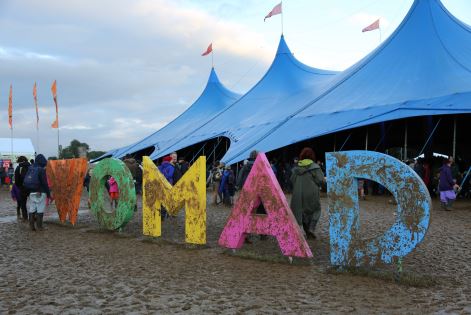 Chartlon park estate is an amazing venue and a perfect site for womaders, the weather was wet and gloomy on arrival but this did not dampen festival goers spirits with a crowds armed with umbrellas and ‘party ponchos’ at the ready. Luckily we had pure sunshine on the Saturday which was blessing everyone still wearing there wellies and the occasional hippy with bare feet. The site was a great size for the main arena with 14 stages, steam fair ground, shops from traders all over, all the food stalls you could think of and a magical woodland area with music stages, bars, arts and crafts such as wooden spoon making, cookery demos, mediation and healing areas and a great area for the kid to play with lots of actives. The woodland area transformed in the evening which was illuminated with bright green and beautiful colours.

This was my first time at womad and wow they did put on a show. The only way I can describe the vast amount of different music and cultures was as if womad travelled to the very corners of world and handpicked these amazing artists, I have never heard so much exhilarating and touching music from performed from these world artist. The crowds at womad were so appreciative at the end of the sets, applause continued for 5 minutes or so on a number of occasions.

Nightmares on Wax played the big red tent Wow what a performance this was his live set with over 6 members on board I have listened to a lot of his stuff and only new of his Djing skills but this was a treat, he went through the history of his music from when he was 18 and talked through is experiences of his career in Leeds, showing of his hip hop root through to disco and techno. Half way through the set they broke it down with slow and soulful beats, amazing visuals which added a euphoric experience.

Tiken Jah Fakoly played the main stage and the sun was fully shining! He came out on stage dressed in a traditional boubou robe filling the main stage with energy and passions with his traditional roots of reggae and full live band, trumpets and female vocal singers. Half way through the set Tiken Jah Fakoly throw off his robe and transformed the whole set, the atmosphere completely changed and filled with Tiken deep and powerful voice and dubby basslines, and amazing backing vocals and involving the crowd. At the end of the set Tiken disappeared off stage while still singing backstage he didn’t want to leave us, it was a perfect ending.

Bowers & Wilkins sound system – A beautiful looking sound system with one of the most amazing sounds, clear and precise bringing hi – fi sound quality to the festival, it especially fitted with the reggae acts that played offering full bass driven sound for those dubby vibrations. The Last night parties were the place to do with acts such as Mad professor, Don lets, Jazzie B, African anolog sounds system and many more. The highlight for me was Don letts who played a mash up of remixes 80’s and 90’s classics mixed with deep reggae roots for all ages!

Analog Africa on Sunday was a particular treat, the founder travelled nearly every African country to search of rare records. He played an upbeat selection of afro – beat and funk and psychedelic swinging boogie, jazzy beats this was a perfect ending to the Sunday for everyone strutting some fresh and funky dance moves.

Dizaeli played the hip-yak poetry stage in the woodland, lucky enough the sun was out and this was a sit down event. Everyone piled round in a circle around him, armed with his guitar and his lyrical mind. He spoke of his experiences and told stories through poetic uk hip hop influences and rhymes his stories were touching and I’m sure everyone could relate to on day to day life ups and downs.

There was a huge amount of food to offer for all appetites varying from Osysters to organic vegan delights, such great vendors offering restaurant quality and worth the festival prices. As a foodie this was a real treat. The goan fish curry shack was a belly warmer for the lunch time in the rain, great spices and meaty fish. We also tried Dorshi a dorset based sushi company using spelt instead of rice, I have seen these guys when they were just starting up and have come a long way. We found an Argentinian shack selling rib eye steak cooked over hot coals which added to that Smokey flavour served in a wrap with spices. We came across and elderflower company serving homemade cordial which was fantastic, I was topping up my gin a tonics with a shot of their sugary syrup. Another jem was street food company selling salt marsh lamb in a flat bread with, harrisa, natural yogurt. The highlight for me was the Samosa shack open early until the early hours of the morning blaring drum and bass, and was almost a mini stage people raving, serving outrageously good veg, chicken and lamb samosas for those late night munchies.

Overall Womad was an amazing experience with its vast amounts of music and cultural backgrounds was unbelievable. Beautiful festival, beautiful people, beautiful 4 days of womad fun. I would highly recommend Womad to anyone and will be returning next year.

Published on 06 October 2015 by Alexandrawalters