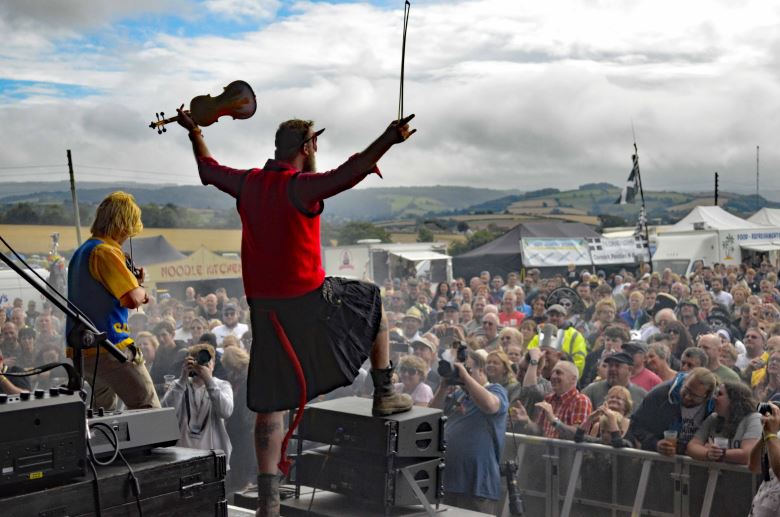 Back after a one-year hiatus, Watchet festival was as full of smiles and fun as ever and seemed like it had never been away. The buzz was back, the pubs were packed and the town seemed vibrant again.

The line-up was an exciting prospect with big names clashing and big choices to be made. Right from the off on Friday evening household names littered the running order with, Bruce Foxtons “From the Jam”, Dub Pistols and finally Reef on The Main Stage up against Tom Hingley and the Karpets on the “Udder Stage”, I opted for Tom Hingley, former frontman of the Inspiral Carpets, who didn’t disappoint, crashing out 90s anthems Saturn 5, Dragging me Down and this is how it feels, all delivered with Hingleys own inimitable wit and charisma.

The ground at Watchet is beautiful, high up on a hill with sea views and the West Somerset railway passing below, but the hill is the size it is, making the chances of it ever getting bigger difficult and unlikely, giving it just a 5000 capacity, which this year sold out way before the opening day, this makes for a comfortable, but exciting feel, with an easy walk between stages and a short stroll down to the town, which also has performers from the festival playing in pubs.

Saturday saw more big names and as well as some great undiscovered talent. Turin Brakes were a big band for me back in the early 2000`s, with songs like Pain Killer, Underdog and Long Distance all making the top 40 and to see them face to face, effortlessly reproducing the gorgeous vocal harmonies and guitar work was quite a moment. Absolute pop gentry followed in the shape of disco icons Odyssey and former Spice Girl Mel C, who although not particularly my cup of tea, looked great and put on a fantastic show leaving me wondering how a star like this could be playing at little old Watchet festival!

With just a 5000 capacity you might expect to see a household name or two, but not a list that stretched from lunchtime till the finish every day of the festival, and all for £82.50 including camping, it really has to be the best variety and value for money of any I have been to.

Following Mel C, was Aswad, best known for their Reggae hits Shine and Don’t Turn Around, and they took full advantage of a crowd that had spent the day basking in possibly the last of our Caribbean weather for this summer and who left the audience charged and ready for the final band of the Saturday mainstage line up, the brilliant Scouting For Girls.

One of my favourite bands of the weekend The Hot Sprockets hit the “Udder stage” Saturday night shortly before 80`s Icon and gold album artist Hazel O’Connor. This retro inspired, psychedelic tinged rock band from Dublin are gathering a big reputation and it’s easy to see why, they look like a band should (in my opinion!), they sound great, and they are bringing back the guitarists knee slide..what more does anyone need?!

Sunday is fancy dress day at Watchet, it all adds to the fun element that is my main reason for coming back every year, and I think you would be hard pushed to find a festival where the audience engages with this more than here, the costumes and the imagination was astounding with the contest winners being four young girls who had walked the field all day in a cardboard box with newspaper headlines of their lives wrapped around it, the crowd let the judges know who their winner was by way of the loudest cheer.

Sundays music line up started off with another great band I had never seen before called Palooka 5, waking the late risers with their own brand of Surf music, tinged with a large inspirational helping of the B52`s, just what the doctor ordered to bring a smile to the face of a wet & windy morning.

The ultra-weird Suede-esq Faerground accidents and The Leylines followed before what is almost an annual event now, The Barsteward Sons Of Val Doonican tearing the Watchet mainstage a new one, just how these guys keep their show so fresh is a mystery, but they are a perfect warm up act to the Westcountrys finest, and probably longest serving purveyors of Cider rock, The Wurzels. It may seem a bit cheesy on the surface, but these guys, some in their 80`s never fail here and I’m sure must help to keep local cider producers Thatchers in business during their hour on stage.

Super tight and extremely popular Celt rockers Ferocious Dog had the un-enviable task of following the Wurzels, but had no trouble keeping the crowd in place for 90`s legends Cast who put on a dazzling display of proving why they had a string of top 10 hits during the Britpop years with songs like Sandstorm, Alright and Fine time.

The final band on the mainstage for the festival was the Super slick 2 tone superhero`s The Selector. Still fronted by the Pauline black & Gaps Hendrickson, they have never sounded better and haven’t lost a grain of authenticity to the years, Too Much Pressure, 3 Minute Hero, On My Radio, Missing words, these were part of the sound track to my youth and I for one couldn’t think of a better finishing act for what was an absolute belter of a weekend!

I`m not sure what effect not having Watchet Festival in their lives had on the punters, aside from causing the tickets to vanish months before the event,  but In my opinion, this festival is a massive asset to Watchet, it has put the town on the musical map, and i`m sure, having spoken to some towns traders, that the local economy  must have missed the festival in 2017.

Published on 31 August 2018 by Keith Dennelly