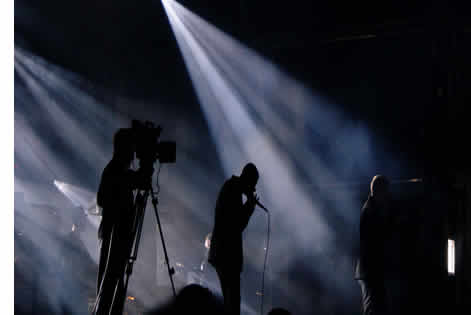 Considering it was my first visit to Evolution, and the first festival I was to experience on tarmac, I was initially a little dubious; would I miss all the mud, the lack of personal hygiene and emerging from a sweltering tent at 6:00am after consuming a brewery’s worth of alcohol the night before? Yes and no. If the thought of wallowing in your own filth for five days is the appeal of a festival, then Evo is not for you, however for the fair-weather festival goer, it’s perfect.

Being so accustomed to resembling a game of Buckaroo upon entering a festival, and dragging my own body weight in camping gear across what can only be described as a swamp, it made a refreshing change to have a hassle free, 10minute walk down to the Quayside. Framed by the Millennium and the Tyne Bridge, and lined with some of the more sophisticated bars, restaurants and apartments Newcastle has to offer, an otherwise relatively quiet Saturday afternoon by the river was transformed, teeming with crowds adorned with glow paint and carrying the essential cans of cider back and forth between the two main stages, Spillers Warf and Baltic Square. The resonating bass from the stages and the surrounding pubs, combined to produce an ambient undertone, which, when paired with the accord of high spirits, produced an atmosphere to rival any major music event.

As the afternoon progressed, we floated in between the stages, taking full advantage of amenities close by; the chip shop/bar for example (a stroke of pure genius in my opinion), and were extremely grateful at the availability of actual toilets, which posed a welcome alternative to the dreaded portaloo. After watching an impressive set by Two Door Cinema Club, with my face buried deep into Mexican chilli burger, it was time to move forward for Iggy & The Stooges. On reflection, the burger was an exceedingly poor decision, as I completely underestimated the extent that I would be moving around in that crowd! Iggy Pop was every bit the punk veteran I had anticipated, delivering every song with as much conviction and energy as he would have thirty odd years ago. Obviously, baring his 64 year old chest throughout, and thankfully without the company of his Swift Cover puppet associate, the ever eccentric, anything but shy and retiring Mr Pop thrashed around the entirety of the set, inviting large groups of fans onto the stage to dance around with him. By this point I thought to myself, even if there was the possibility that Sunday’s line-up could disappoint, as far as I was concerned, I had already got my £35 worth.

Post Iggy, my friend and I had the fortune of visiting the backstage bar to enjoy a well-earned sit down on leather sofas, a luxury I am all too unfamiliar with at festivals, and partake in the odd cheeky jaeger-bomb. While backstage we were able to talk to organisers and even bands that were due to play the following day, such as Viva City, and found every single person so accommodating and extremely friendly, which reflected the nature of the entire festival.

Perhaps being more familiar with the hungover hordes traipsing around the likes of Download festival, still slightly intoxicated and wearing nothing but a bin bag after a rough night at the camp site, returning on the Sunday at Evolution, slightly tired and aching myself, I partly anticipated a slight lull in the atmosphere, however was completely mistaken. The crowds were just as enthusiastic and animated, if not more so, perhaps due to the utterly cloudless sky accompanied by a much needed breeze, and the prospect of the line-up due to close the festival. Towards the early evening crowds began to gather around the Spiller’s Warf stage, awaiting the arrival of Example. The audience response was remarkable, singing every word to every song, with the feel-good nature of his track Watch the Sun Come Up written across their faces as they were encouraged to hug the person next to them. Succeeding Example was Tinie Tempah, who delivered an absolutely faultless and charismatic performance, completely justifying his countless awards and nominations in the past year. Pass Out and Frisky were by far the highlights on the set list, causing the most rigid member of the crowd to dance. The only criticisms were the occasionally poor sound quality, as there was a tendency for the track to be much louder than Tinie’s vocals, and the unavoidable shriek of female admirers.

At around 21:50, after his own support act, Plan B arrived, as usual dressed like an East End gangster but with an absolutely pitch perfect voice. To my complete amazement throughout every song, even during the slightly more mellow tracks such as She Said, a circle pit ensued, followed by, and with great encouragement from Plan B himself, a wall of death! The performance was outstanding, incorporating some of the most bizarre but brilliant covers into the set including a dubstep remix of Seal’s Kiss from a Rose, complete with beat boxing and yet more circle pits. The band were exceptional, all dressed to complement the 1960s-esque stage set up. As the last obligatory inflated condom drifted off into the night sky and the set drew to a close, the crowd departed, only to be surprised with an encore 5minutes later by Plan B and the band for a reprise of Stay Too Long. The encore concluded a flawless set, and a fantastic weekend, and all for £35. Bargain!