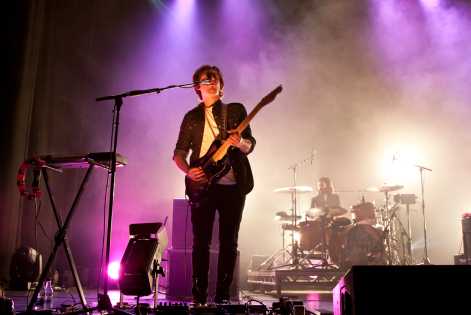 Brighton: With the weather set to 'sit back, relax', the second day of The Great Escape was perfectly set up for the kind of festival atmosphere that it deserved on the first. Crowds lazed around pubs, buskers took to street corners, and the smell of fresh-cooked food mingled with the sea air to give everyone all the encouragement they needed to let their hair down for bands who were keen to get the party started.
After winning a tube of Drumsticks playing a basketball game on the pier, and experiencing a surprisingly large sugar rush, I headed over to Psychosocial Basement to catch Brooklyn-based indie-pop outfit Savoir Adore. The room quickly filled and there was a buzz in the air even before they took to the tiny stage, all of which suggested that I probably should know a lot more about this band than simply that I liked their name. I suspect I will be hearing a lot more about them in the future, as Deidre Muro, Paul Hammer and Co burst out with the kind of sparkling, upbeat, hook-laden tunes that summer soundtracks are made of. This five-piece already have a strong following in their native New York, and some of them of them were in attendance in Brighton, singing along to beautifully crafted tracks that brought elements of indie rock, electronica and straight-down-the-line pop into perfect harmony. Despite throwing in a few impromptu dance routines, albeit slightly hampered by the low ceiling, the lyrics hinted of deeper concerns beneath the sheen, and the notion that they were a band who were able to bring a lightness to serious topics without descending into mawkish sentimentality was reinforced by a cover of Prince's I Would Die 4 U that they made entirely their own.

Doing your own this has always been a trademark of Icelandic artists, and Retro Stefson are no exception. I defy anyone not to be instantly drawn in by their engaging Afrobeat- and Latin-tinged take on having a good time, and they used all seven musicians to great effect in an inventive, intricate sound that never forgot they key ingredient: rhythm. If the first two songs, which loosened the crowd at Green Door Store into a foot-tapping sway, were energetic and driven, the third, Qween, was a something else entirely. Deftly arranged and played, it slid effortlessly through melody after melody and built to a brilliant finish that had any remaining doubters in the room firmly on-side. Ignoring the natural British reserve, backing singer and percussionist Haraldur Ari Stefánsson taught the audience dance moves for the next few songs and, not content with that success, started a running conga around the room for their last track, which broke down into a full-on party by the end. I am sure anyone who was there would be delighted to see Retro Stefson on the bill at a festival, for a guaranteed half-hour of happy-battery recharging.

I don't think Clock Opera have a happy-battery, but that is not to say that they don't have a sense of humour. Half way through their gig at the Brighton Dome, lead singer and multi-instrumentalist Guy Connelly told a story about coming across a race horse with the same name as the band the other day, and betting all of their pennies on it. It came in last. Fortunately, luck has nothing to do with talent, and that was what abounded in the cavernous hall, which Clock Opera filled to the brim with chopped-up electronic micro beats overlaid with grand, majestic, heartfelt pop-symphonies that made me think as much of Phillip Glass and the Penguin Cafe Orchestra as it did Disintegration-era Cure, Sigur Ros or Radiohead, when they feel like blowing your mind. But if that sounds like it was a tad pretentious, it was nothing of the sort. This was, if anything, art with a small 'a'. Nothing seemed self-consciously inserted to achieve an effect, rather the music appeared to have been pulled direct from the front of Guy's head, an impression that was reinforced by the commitment of his singing. But perhaps the commitment was a tad too great – the over-riding sense by the end of the set was one of timing. Everything was exactly to time, all the time. One loop played from a laptop lasted for two songs, and the band were bang on every note throughout. By the end, I was as mesmerised by the drumming as I was taken by the music, and I wondered if leaving some things to chance might allow them to have an even greater impact.

Impact is what The Temper Trap, who followed Clock Opera onto the stage at the Brighton Dome, we're all about. That and not much else. The Australian band, recently expanded to a five-piece, seemed content to sit exactly in between pop rock and indie rock, with elements of stadium rock; the only problem being that they weren't enough of any of those to have an identifiable, unique, or even memorable, sound. There was too much sheen, and the rebel rock gestures seemed as empty as a bored waiter asking if everything is all right with your meal. Not that most of the audience had been out a restaurant unaccompanied by an adult, judging by pitch of the raucous cheers at the end of each song. Maybe I am wrong, and there is a new album out shortly that could make me look an idiot for dismissing The Temper Trap, but I suspect not on the strength of the evidence presented.

For me, my final gig of the night was my most eagerly anticipated, and if my random survey The Great Escape is anything to go by, it was for a lot of people. And having missed them the night before at the Pavilion Theatre, I was not going to let a chance to see Django Django slip by again. That my expectations were entirely built on hype and reputation didn't actually bother me, as it was my most trusted sources, with the most reliable barometers, had said I had to go and see them. If the Blind Tiger had been hot, packed and sweaty for Gaz Coombes, the temperature, humidity and excitement were even higher by the time I squeezed my way through the crush just in time for the Scottish quartet to pull on their colour-coordinated T-shirts and greet the roaring crowd. They did not disappoint, as they crashed their way into a woozy, dance-infused, electro indie-rock set that somehow combined psychedelia with the intimacy and energy of an Irish pub in full swing. I don't know what they were like at the Pavilion Theatre, although it is clear that this band could handle a stage of any size, but everything clicked in that small, rammed venue to create a moment that felt like we had taken part in something extraordinary. Every song was pitch perfect, displaying the versatility and invention of their playing, and executed with a drive and enjoyment that was entirely infectious, such that the announcement of the last song was met with heartfelt disappointment. This was one of those festival gigs in which you realised every one of the crowd would be talking about it for years to come, and one on which reputations are built. As they left the stage to and we spilled out into the cool night air, it was clear that the notes will take a lifetime to fully die away.