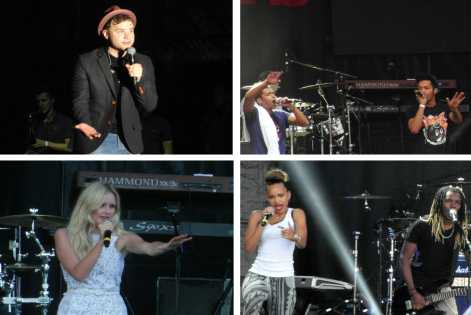 With past performers including JLS, N Dubz and The pussy cat dolls, the 29th of July Sound Island festival was set to bring a whole bunch of superstars and fun to Quex park in Birchington, near Margate again.

In association with Heart fm radio station, Heart breakfast presenters James and Charlie were on hand to introduce each act and the Heart angels made sure that everyone enjoyed their day by handing out banners for children to write the act they were most looking forward to on them.

With many artist's set to hit the stage, there was something for everyone and people of all ages. With Support acts including up and coming artist I Am Tich, who was discovered on Youtube and has co-wrote with Jonas Brother Nick Jonas on the bill it set the five-hour concert off knowing that it was going to be the start of a brilliant day. The Only way is Essex star Jessica Wright debuted her first single Dance all night, Gary Barlow’s newly signed 17 year old act A.M.E also performed some of her Urban tracks and her debut single Ride or die, due for release sometime in September.

Singer, songwriter Diana Vickers, who came fourth in the fifth series of The X Factor in 2008 has also performed in the west end and turned her talents towards fashion designing in the last two years. However on the day of the event Diana surprised concert goers and took to the stage with some brand new material from her next album, including Music to Make Boys Cry. She also finished her set with her brilliant number one hit Once.

Four-piece band Cover drive, who are originally from Barbados were a massive hit with the crowd. The band consists of Amanda Reifer, T-Ray Armstrong, Barry "Bar-Man" Hill and Jamar Harding, who have already been the opening act for the one and only Rihanna on her 2011 Loud tour.  They performed hits from their debut album Bajan style including Sparks, Lick ya down, their number one  Twilight and new single Explode.

Twosome Rizzle Kicks got the most screams so far when they entered the stage. Jordan "Rizzle" and Harley "Sylvester" stood on speakers to get a good view of the huge crowd that had gathered to see them and headliner Olly Murs. Their energetic set list included songs from their debut album Stereo typical . They performed Down with the trumpets, When I was a youngster and their well know track Mama do the hump, where the crowd impersonated their comical dance moves along with the twosome. Even though there was a slight rain shower this didn’t put people off from having a good time.

At 8.45pm the anticipated await of Olly Murs was over. Parents, children and friends and families had gathered to see the singer songwriter, who has had major success in the UK alone selling over 108,000 of his first self titled debut album, after coming runner up to Joe McElderry on The X Factor in 2009.

Olly entered with his number one hit Dance with me tonight, he then continued to perform tracks Tell the world and I'm ok from his second album In case you didn’t know. With a long catwalk Olly could get up close and personal with the crowd and he certainly did, trying to fit in as much talking in between songs as possible – it was true to see that Olly definitely had a great sense of humour. The following songs included outstanding covers of Should I stay or should I go, by The Clash, Town called malice, by The Jam and mixing his On my cloud with I need a dollar were a crowd pleaser. Olly then went onto reenact his X Factor audition Superstition and finished the end of a fantastic day with his first ever number one Please don’t let me go and Heart skips a beat.

Olly was thankful, comical and a great showman. Himself and his band were on top form all night and he definitely charmed Kent like he did the nation whilst on The X factor. With his non-movable hat, tight trousers and cheeky look it was easy to see that he made many fan’s Heart skip a beat.

I can’t wait to see who they bring to the Sound Island festival next year, because this will be hard to top.

Published on 31 July 2012 by TasminAnderson