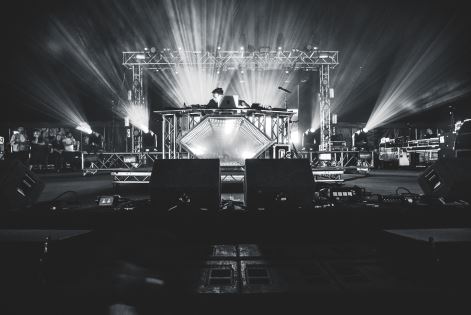 The sun was beaming down and it was the perfect day for Lovebox Festival 2015 at Victoria Park, Hackney.

Heading down on Saturday afternoon we were welcomed by New York neo-soul duo Lion Babe who was owning the main stage. Front-woman Jillian Hervey is a beautiful songstress, with her powerful yet smooth vocals layered over a funk infused beat they kicked the day off on a high.

The Big Top Tent played host to a variety of high class talent with the likes of Nils Frahm, Maribou State and Flight Facilities topping the bill. The modern classical pianist, Nils Frahm performed a captivating show which combined a blend of electronic music and synths within a dark and moody atmosphere. With his intriguing live set-up, this was a distinctive set that left us curious for more.

This years festival had a great mix of small boutique independent pop up stalls and Mountain Dew had a huge half-pipe along with speakers blazing out music whilst the MC’s were toasting on the mic. The Corona stage was a bright, bubble of sunshine that drew in the crowds throughout the day with their old school funk, soul classics and electronic beats. BBC 1Xtra claimed the Bamboo Stage, which was a great space combined with bassy sounds.

Elsewhere the The Despacio tent was creating a buzz across the dusty fields, named for the sound system developed by James Murphy of LCD Soundsystem and 2manydjs the tent was filled with retro speakers, a huge disco ball and lasers.

One of the highlights of the day was an uplifting performance from Aussie duo Flight Facilities. Playing their remix of Paul Simon’s classic ‘You Can Call Me Al’ the sea of happy glittery faces and smiles beamed across the crowd whilst dancing away. With their deep house, nu disco set they tore up the stage and the atmosphere was electric.

The West Stage was presented by Noisey and British DJ Bonobo put on yet another superb show, this guy never fails to deliver. His beautiful melodic music of cutting edge electronics, bass and drums translated into an amazing set.

On the Main Stage the excitement was building for Snoop Dogg's return to Lovebox. Playing his back catalogue of hits including ‘Gin and Juice’ and ‘Drop It Like It's Hot’ the crowd were chanting along to each word. Ending his set with Bob Marley’s ‘Jammin’ it was a great end to Lovebox 2015.