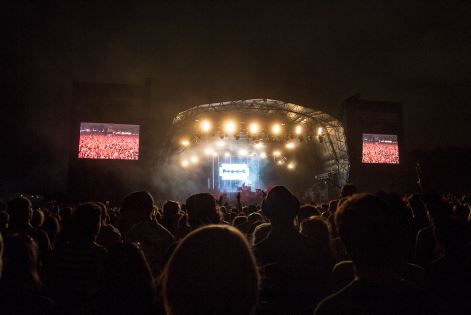 Lovebox Saturday had a lot to live up to after hearing several glowing reports about the Friday.  After a couple of weeks of non-stop sun, the clouds had decided to play their part in events on the Saturday.  It was a hot and overcast start to proceedings, however that hadn’t seemed to dampen the mood as we arrived at the Red Bull Music Academy tent, as Kon was playing out Scott Garcia’s Garage classic, ‘It’s a London Thing’, which set the tone for the day perfectly.

We then had a quick walk around the festival to get our bearings, spirits were high and the lack of sun was probably appreciated by many there, the high temperature still made you feel as though you were at a festival in some hot, stone-baked foreign land.  That walk around lead us by accident to see Tinchy Stryder on the main stage, a name that was missing from our set list, the crowd very much enjoying his highly catchy brand of grime.

Over at the Terrazza stage there was a good turnout for Lee Foss, the sun was now trying to break through and the party was in full swing.  We moved over to the Red Bull tent to see the highly dynamic Darq E Freaker group, their energy on stage playing out some Hip Hop greats was contagious, there wasn’t  a soul not moving their feet in the tent.

One of the acts I was most looking forward to seeing was up next in The Russian Standard Vodka tent, a cramped wait in one of the smaller tents at the festival was fully worth it when DJ Yoda finally began his set.  The stunning visuals matched with the chest vibrating sounds from his laptop and orchestral backing resulted in many jockeying for space in the tent to show off their best moves.  The fresh air was greatly needed as we left and made our way to the main stage to see the final two acts.

D’Angelo was first to entertain the crowds with his smooth tones from voice and guitar, but most of the crowd that had made their way to the main stage at this point were there in anticipation of Plan B.  A now seasoned performer who seemed very much at home as a festival headliner, I still felt it lacked some of the dynamism that I was expecting from him and unfortunately I felt the sound system on the main stage never packed the same punch as it did in some of the other stages, a problem Lovebox has always had with their main stage.

The sun had definitely decided to shine on the Sunday however; a smaller crowd numbers wise was made up for by the presence of those who were there.  A camper ambience to the festival compared with the Saturday, but a more relaxed and chilled out vibe was supported by an array of colourful and flamboyant outfits on show by those in attendance.  Unfortunately such positivity couldn’t be shown to the event’s organisers.  The main stage had been taken out of action due to lack of tickets sold, we believe.  This meant a rejig of who was performing where and the only people able to let us know this information were the staff at the press tent which left many people in the crowd unable to find out where acts they had come to see were performing.

The Sunday highlight was definitely Kelis, who appeared in an outfit that would’ve fit in perfectly with the crowd on the day.  Dropping a mix of old and new of her own tracks and a mish-mash of other artists tracked played out by her supporting DJ had the festival-goers bouncing and shaking in the afternoon sun.

There was disappointment to be had by some after the performance as many had waited patiently for the arrival of Lil Kim whose performance was then cancelled, apparently due to her late arrival for her set time.

This didn’t seem to stand in the way of too many though as they partied well into the Sunday evening, seemingly unaware that the working week was just a few hours away.  As we left the many smiles on the faces were indicative of the great weekend had by those who had made the trip to East London.