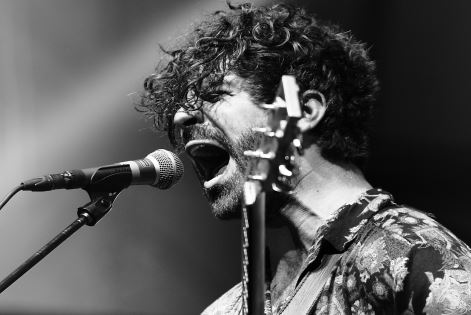 Eight years on since its inception and Latitude continues its' success with another great festival set amid a beautiful Suffolk parkland setting. Offering such a diverse range, from music stages, through comedy, literature, poetry, theatre and art there is truly something for everyone.

As always (having never missed a year myself) the atmosphere is relaxed and convivial, helped by a crowd of only 35,000 people.

Headliners this year for the Friday night on the main "obelisk" stage were Bloc Party who played an amazingly great set to a very large and appreciative audience. This was preceded by another well received set from The Maccabees, whilst another notable performance came in the 6 Music tent from The Villagers.

Saturday brought a welcome relief for many from the previous days blazing sunshine and excessive heat and as a result the arena was far busier with a constant flow between stages. The pick of the festivals consistently great line-up for me included without doubt a superb performance on the 6 Music stage from Daughter and also Richard Ashcroft performing both old and new songs including all of the crowd pleasers from The verve. This stages evening was rounded off this a real highlight to a huge and enthusiastic audience by Alt-J.

As the day went on you could feel the anticipation growing for the evenings headliners Kraftwerk, before them however, another day of decisions had to be dealt with, which music stage to go to, or see comedy or relax with the kids in the ever popular children's area with it's many activities to amuse the younger festival goer. Maybe take in something in the literary  and poetry arenas, or take a punt on the lake before choosing something from the vast array of food outlets offering almost every option you could hope for.

Back to the main stage and some Yeah Yeah Yeahs, then Hot Chip before donning the 3d glasses ready for Kraftwerk.

But, two songs into the set of classic Kraftwerk, a dilemma for many, particularly the younger ones, Alt-J topping the days bill in the 6 Music tent. Many left to see and hear the Mercury Award winners, me included. I think for many Alt-J being by far the better choice with a large crowd which continued to grow throughout the performance as for many the German electronica arguably became a little monotonous. I think this was not helped by the lack of visual energy onstage which relied entirely on projected imagery.

All too soon, It was Sunday, but still with still so many great acts to come. Maybe one of the largest crowds of the weekend for the Radio 6 Music stage were there to see laura Mvula during the heat of mid/late afternoon. Another really notable performance in my opinion came from Icelandic band Mum which was soon followed by an amazing atmosphere inside the very full tent for a great set by Rudimental. This was perhaps the most enthusiastic, or at least very close to being so, for a set that got almost everyone excited.

Disclosure were on next doing almost as fine a job before the evening there was rounded off by a fine show from Beach House.

On the main stage the crowd enjoyed the days offerings starting with the prestigious lunchtime slot played by Bobby Womack to a very appreciative crowd. then from the likes of James Blake, Local Natives and Grizzly Bear. Then I think the band that most had come to see and had been eagerly awaiting for, Foals. What a set it was, the stuff of true headliners with the crowd totally up for it too.

Published on 29 July 2013 by robmarrison