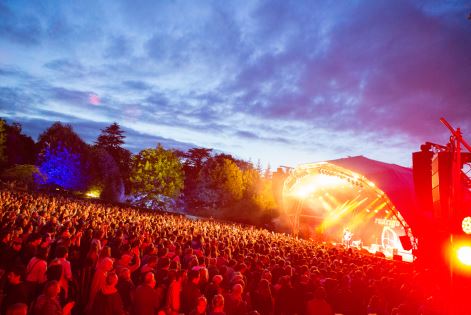 I think i left my heart in Larmer Tree Gardens this weekend, the 25th birthday celebrations were in full flow with some quite brilliant musicians.

I know i should leave the best till last but the double whammy of Ibibio Sound Machine and Femi Kuti, on the main stage on Saturday night, was a mind blowing soundfest. I prefer my music to be bold and out of the ordinary and these 2 absolutely delivered.

Femi Kuti was headlining and his support group, The Positive Force, were a huge wall of sound and glory from start to finish. African beats and backbone merged with all sorts of other smaller musical influences and performed with real energy this is an awesome live show. Senior to probably 99 percent of the performers at Larmer Tree, Femi put them all to shame, running around the stage and strutting alongside his trio of belly dancing backing singers, playing multiple instruments and utterly immersed in the performance.

Ibibio Sound Machine were a revelation to me, not being the most switched on to the edge of any musical scene i'd not come across them, but i have been listening to them plenty since. Their album is an interesting mix of (mostly) African vocals and an Afro inspired dance/disco/rock club feel, the big hit Let's Dance getting a big club following last year, but live they are HUGE. Guitarist Kari Bannerman peeling off ridiculous solos and big drum sounds powering everything, singer Eno Williams is probably one of the most charismatic performers i've seen and so engaging. Go and see them, now.

The festival as a whole is quite contained, spread across 2 main areas, an outer village area with the bulk of the grub and shopping opportunities every festival provides and then a more enchanting section set in the old Victorian Grounds of Larmer Tree Gardens itself. The village had a collection of smaller stages including the Arc tent, home of the comedy in the evenings, household tv names like Sara Pascoe and Seann Walsh providing the entertainment, and music during the day.

This is a family festival and there was plenty to keep the kids entertained, street artists and small shows galore across the weekend, and there was also an adult workshop tent for the parents who wanted something different to do. Clay sculpting, mosaics, sewing making up the bulk of the fun.

Inside the grounds it all gets a little magical, there's the Lost Woods, full of disco balls and little creeping pathways full of surprises, there are poetry stages, yoga tents, giant games of chess and board games galore. Its a wonderful space that also hosts late night DJ sets and a roaring fire. The other side of the main stages is the kids area, lots of craft workshops, small plays and discos, toys and tents and shady green spaces for families.

The main space is also something a bit special, the main stage on the far end flanked by banks of beautifully lit trees and nestled in next to it is the Garden Stage, a wooden building well over 100 years old with a domed ceiling and covered in beautiful art. In the mornings this was home to mass yoga sessions, which were hilariously interrupted by the peacocks immortalised in the Larmer Tree logos for the 25th anniversary. There is little funnier than the serene calm of over 200 silent and serious people trying to become one with themselves being screamed at from a tree..... OOOOOOWWWAHH!!! OOOOOOOWWAHH!

Show of Hands were here, they played the first festival 25 years ago and were on form this time round, getting a foreword from event organiser and founder James Shepherd as he thanked people for coming. By The Rivers played 2 excellent sets on the same day and Bill Bailey was on his usual form on Sunday Night.

Too many good things in one place to mention here and Tom Jones didn't get a look in! Next year, just go, its awesome.