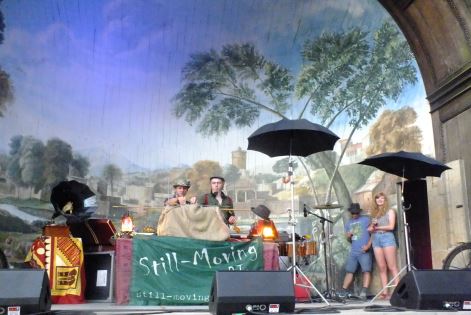 By Ned The Kids Dylan

I returned to the idyllic, picturesque Larmer Tree Festival for the fourth  consecutive time on Thursday night. I made my way to the main lawn of the folly gardens anticipating an amazing night featuring legendary guitarist Richard Thompson with his trio, and funky soul band Dexys. Last year I spent good times at Larmer with Giles Beerbohm, all round good guy but gone too soon and sadly missed. This review is dedicated to you, Giles.

The Richard Thompson Trio’s set really got better as it went on, featuring some of the best guitar solos I’ve heard for a long time. Channelling an almost psychedelic feel. I’ve only seen him play acoustic sets, but with the band he really is something else, something you certainly wouldn’t call folk but it was brilliant.

Dexys next took to the stage, bringing a theatrical performance with soul, passion, heart-rending crooning from Kevin Rowland and great showmanship. By playing the whole of the new album, Dexys proved to me they definitely still have it and are still making truly brilliant tunes. I heard mixed reactions and with so many great songs to their name I think for a festival, it was an unwise setlist, but I really loved the opportunity to hear the new material live!

I managed to visit Songs from the Shed backstage – a real garden shed transported to the site to record bonus acoustic sessions, with many quality artists this weekend from headliners to openers. I managed to speak to Jon Earl, the man behind this much acclaimed shed. He told me ‘it was a daft idea in a pub, I asked someone to play in my garden shed and it went from there.’ Soon enough he had bands wanting to play there, and ‘it went from a daft idea to two million views, and 500 sessions.’ When I asked him how it felt when the shed took off, he said ‘It was confusing at first! I’d never made video or been in the music industry. Suddenly it was getting in the press, TV crews were filming what I was doing, Bob Harris and then Cerys Matthews were talking about it!’ John also told me how much he loves Larmer Tree Festival, how he loves ‘being surrounded by creative people’ and the atmosphere! He adds one of his favourite moments from the shed was when he got Alabama 3 to play as he is a ‘massive fan of theirs.’ You can check out this and other cheeky shed recordings on their website.

Larmer has a very chilled ‘youthzone’ for all people aged 11-17. Run by friendly, welcoming people this is a great place to hang out, play music, make stuff, listen to stories, or just sit down with a cup of tea and play a card game. On offer for all the children was the kids comedy club at the (almost) always open venue The Social; woodland crafts, and loads of other activities. For the younger kids CBeebies’ Katy Ashworth put in a popular appearance. Adults get to play too at The Playground with talks, comedy and film.

This year, film critic and Larmer Regular Mark Kermode returned with his film club and Sci-fi as its theme. MKFC showed a selection of films including Peter Cushing as The Doctor in Daleks 1250 AD, which as a Whovian I loved, Groundhog Day, Back To The Future, The Amazing Mr Blunden (which had the place bursting at the seams), and more! I managed to interview a very chilled Mark Kermode as he was relaxing in the shade of the food court.

The film selection is always great and so I asked Mark how he chooses the program. He told me ‘we come up with a theme and then think, what would we like and what can we get’. He told me that he loves this festival and this year was particularly enjoying the big sun’s first appearance at Larmer for five years. But aside from the weather Mark told me he loves the Larmer film club because ‘we get to see lots of people watching movies that we really like, in a nice space…in the past we’ve had to turn people away’.

Mark Kermode’s favourite Larmer moment? ‘Oooo, that’s a hard one, what is my favourite moment over the years at Larmer Tree? Last year we shot the culture show here, and it was really muddy and really wet and really rainy, and at one point I fell into a pond. At the time I didn’t find it funny at the time, but afterwards it was. They have a tape of it, and I’m sure it will turn up somewhere’.

Meanwhile on the main stage a highlight for many, including me, was The Gentlemen’s Dub Club. With an enigmatic frontman, killer tunes, they had everybody at the main stage dancing – and at one stage squatting with instructions to ‘default to picnic’! These will be a big name on the festival circuit.

Punters can camp at the festival for anything from one to seven nights – allowing you to make a beautiful holiday of it. In the last few years the ‘glamping’ business has been booming. So this year at Larmer, I walked up to see ‘Hotel Bell Tent’ who were in charge of making sure your camping was comfy with brilliant service. When I rang the desk bell, a charming manager Charlotte came to reception and led me past their pamper tent through to the shade of the lovely and spacious lounge tent where Charlotte’s assistant offered me an ice pop in the blistering heat. Charlotte showed me round one of the bell tents all set up and waiting for you. Wow! I can’t quite imagine cotton sheets and a proper bed at a festival but if there is ever room in the budget, I think I’ll certainly have a go at glamping!

Another highlight, was the White Mink club-nights making a much deserved return to the Big Top with a new night – electro-blues. It featured live sets from the likes of Son Of Dave and an awesome DJ set from electro-swing pioneer Nick Hollywood! This year I’ve seen more electro-blues nights at the festivals than ever. I hope they stick around.

The storytelling was amazing at Larmer. Not only were there performances for kids, but unusually adults were treated to intimate late-night tales around the fire in the Lost Woods. Pandvani108 take turns to be teller, ‘Raggi’ or accompany the story with percussion and singers. They told me ‘the Pandvani tradition is fun, high energy, and it gives you a really different way to tell myths that seems to really work no matter where you do it!’ But they admitted the Lost Woods at Larmer Tree ‘is a perfect place to tell stories’. In the compact site I was able to hop from the main stage to the storytelling easily and the performances were mesmerising.

Headline sets came from Van Morrison, Seasick Steve, Imelda May, KT Turnstall, and Bellowhead. All great sets holding a sticky main lawn crowd. But I was blown away by BBC 2013 Folk Horizon Award winner, Blair Dunlop and his band showcasing his brilliant guitar work, beautiful vocals, and heart-rending melodies in the ARC stage.

I caught up with Blair between his two sets. He told me that musicians had told him Larmer Tree is a great festival to play because it is so relaxed; the crowd want good music but to have fun too.

As ever the comedy line-up was stellar including big names Dylan Moran and Alistair McGowan. It really showed that this festival has something for everyone and while keeping the music line-up amazing they cater for other fields of entertainment by booking the best in the business.