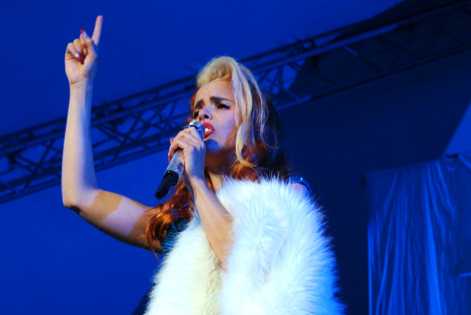 The Larmer Tree festival once again opened its gardens in 2012 to a crowd of more than 5000 with headlining acts such as Jools Holland and Levellers dissonantly sandwiched between the likes of Zoe Lyons and Stephen K Amos but nicely brought together with the introduction of the multitalented musician and comedian Tim Minchin who delivered the most exciting performance of the festival with Dark Side and his hilariously well-crafted sacrilegious Pope Song.

Hoping to improve on the previous year’s event, organisers had extended side stages the Arc and the Social to almost twice their former sizes to meet growing demands but unfortunately for the first time since in its 22 year history, Larmer Tree failed to sell out its 6000 capacity tickets. The middle-class country folks surely cannot be feeling the pinch, it was all probably down to the depressing weather forecast.

All performers throughout the stages unanimously began their sets with weather commentaries, some of which were hopeful, lamenting, apologetic and others simply contemplative. Paloma Faith opened her Thursday night show remarking that it was her first time in Dorset and she has hoped it would be ‘less shit’ than Norfolk, which had been unusually sunny in July.

The village, which is central to all stages as well as the shopping Bazaar, was a glorious muddy sludge-fest, which gradually rose to over ankle level by the last day. The precious peacocks which had been roaming freely around the site were now fervently perched on the fences and no amount of breadcrumbs or hot potato wedges was going to tempt them back down, much to the disappointment of the bird-watching picture-taking revelers.

Mark Kermode’s film club was a fantastically brilliant touch to the festival and included treats such as Jaws, Silent Movie, Wall-E and a bit of Hitchcock. His selection and personal introductions of each film (including the midnight screenings) were creative and just right for the discerning Larmer crowd although David Lynch’s Eraserhead seemed to put a couple of people in a kind of waking slumber and for the first time in the film club’s history, Kermode personally ejected the delinquents!

The traditional Sunday vibe was very much in place with the makeshift fitness stages welcoming the highest numbers of attendees to its Yoga, Tai Chi and Zumba sessions. In the Social, unsigned acts such as Jonnie Dean and Ned The Kids Dylan were making their debut performances while simultaneously the main lawn played host to chilled-out performances from JP Cooper, the Urban Folk Quartet and finally, the famous carnival procession.

Many took in the last-minute chance to explore the site art throughout the sculpture garden and the hidden discoveries to be found across the site, although many of these had now been decorated with ample splashings of mud.

There are a multitude of things to get stuck into at Larmer, even when the sun doesn’t shine. The five days does fly by and the sheer amount of tweeters posting about dragging their feet back home and waking up to another Monday morning just goes to show.

With a diverse blend of music and performance acts, comedy, film, dance, carnival, workshops, specific adults, kids, and youth provisions, Larmer seems to have it all but as always, there is always room for improvement. The view of the main stage is close to impossible unless you arrive an hour beforehand. Anyone under six-feet tall only ever sees the roof of the stage glittering above blurred heads and hats – this might be one of the very few festivals that does not use additional monitors to transmit on-stage action but come the 2013 festival, that may well be a thing of the past.