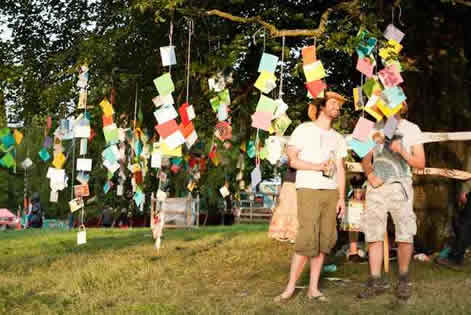 Looking one way to the Lakes and the other to the Pennines, the ancient valley of Lowther is steeped in English history. The parks 3,500 acres of Cumbrian soil, water and woodland make ideal surroundings for a festival celebrating music, art, poetry and so much more while embracing one of the lands grandest natural gestures.

The festival itself is in its sixth year and it has grown drastically from its birth. 13,000 people will be  entering the gates of Lowther Deer Park this year and the sun shines bright as I carry my tent to the nearest free space.
With headlining acts like Blondie, Chase & Status and The Cribs on the main stage it's no surprise that there would be big numbers getting their camping gear out this year. I'm pleased to say however that Kendal Calling has not changed its layout of nooks and crannies leading to something different around every group of oak trees. With the combination of many of the stages under circus big tops, along with zebra's on stilts and gentleman on tight-ropes the arena creates a vibrant, almost psychedelic atmosphere that comes to life on a blisteringly hot day like today.

Kendal Calling definitely has a rich variety of goings on, from the acts to the food stalls, the shops and workshops, the bars, silent disco’s, illusionists, costumes, lectures and an attempt at baking the world’s largest Mint cake it creates the sense that everyone has been considered and that this is  everyone's festival.
The attractions on the main stage are equally matched by the smaller stages throughout the weekend, spoiling festival-goers for choice on what songs they'll be singing along to next. For me personally it's these smaller tents that lead to the most excitement when accidentally stumbling upon something really special. A highlight for many was the impromptu return of a band, and a set of songs that some thought were lost forever. Whispers and rumours filled the air between the tents on the Saturday and Sunday of the return of The La's and on the final day of the festival the Calling Out stage played host to those very tunes.
Other highlights included The Invisible String Band on the Kaylied Stage, The Young Knives gracing the Main stage with their first topless gig, wordsmith Mike Garry providing the Soap Box audience with his poems and the Riot Jazz Brass Band projecting its rhythms right across the fields.

Easy Star All Stars proved to compliment the weather perfectly as children, Duracell bunnies and men in dresses danced in the sun to the well received reggae covers.
The Cribs kept the crowd hanging on every word as they played their songs to the packed Main stage audience even after the brothers could be seen wrestling with a tent earlier setting up camp for the night.

Songs imprinted in the minds and memories of people across the globe were belted out to the point of sore throats when Blondie took to the stage, Debbie Harry and co gave Kendal 'Heart Of Glass' 'Maria' and 'Atomic' and a perfect ending to an eventful, sunny and truly exciting festival.
It's clear why the weekend event has received so many comparisons to Glastonbury, its settings are similar to the southern fields of Somerset in both feeling and aesthetics but the spirit of this festival is still rooted towards a more intimate style. The acts may have got bigger but that hasn't changed Kendal Calling's obvious aim to provide something for everyone.