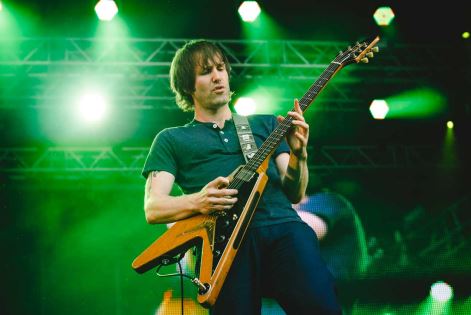 Nostalgia is coming in for some absolutely ruthless and vitriolic tongue-lashings from scores of acts lately. Most recently lining up to stick in the boot being Richard Ashcroft, accusing it of merely “suffocating” festivals during a recent interview. Although, it was met with some slightly raised eyebrows that he of all people is a fine one to be railing against nostalgia. Even ex-Streets singer Mike Skinner taking a veiled “Oh, I thought they’d split up” dig at fellow main stage act Ash midway through his set at Kendall Calling on Saturday afternoon.

But, nostalgia is something Kendal delivers extremely well and has done since its inception. You need look no further than last year’s headliners James in realising that age, experience and classic pop tunes certainly aren’t a hindrance when it comes to delivering a phenomenal set. And, this year’s headliners were of the same ilk, too. With The Charlatans, fronted by Burgess and his golden mop top and, Primal Scream’s Bobbie Gillespie both sauntering through sets crammed with classics that helped define and contributed towards arguably one of Britain’s finest musical decades. Perhaps the “oldies” are just doing it better than anybody else? But these verbal beatings for our longing wistfulness to see older acts seem only to be coming from disgruntled musicians, and not directly from the paying festivalgoer’s themselves. So, surely it’s simply a case of supply and demand? And Kendal looks as though they’ll continue to deliver it.

Typically Northern weather had unsurprisingly set in relatively early on during the weekend, as the sky teased everyone with prolonged glimpses of Blue hope and then flashes of Grey, impending clouds that threatened to spoil the merriment. But, the weather will have left Manchester act I Am Kloot feeling at home, no doubt. Since their wonderful cult-debut Natural History was released back in 2001, the group have flew largely under the radar. Yet, they are now garnering more music press coverage and critical acclaim than in their entire history as a group, which is something that fans of the band feel is about time. The crowd were besieged by a large number of back-catalogue tracks and more contemporary material and an also, shall we say, a “well-oiled”, John Bramwell. So well-oiled, in fact, that Bramwell decided to leave the stage early declaring the set was over, only to amble back, raise his glass and announce the set was due to continue for another fifteen minutes.

It would be hard to argue a case against Sea Sick Steve undoubtedly delivering the stand out main stage set of the weekend. He’d brought his dirty, foot stomping Oakland blues to the Cumbrian Countryside, which drew a staggering crowd. And the slot seemed tailor made for Steve. As the sun dipped lazily behind the rolling hills surrounding the site, he plucked a girl from the crowd to join him onstage, while serenading her with the absolutely stunning ‘Walking Man’, leaving it feeling more like listening to the Delta Blues down on the banks of Mississippi as apposed to the English countryside.

If you’re judging festivals based on media opinion, as apposed to your own experiences, then the state of UK festival scene over the past few summers “appears” to be in a critical condition – aging dinosaur acts, terrible weather and poor ticket sales. To a certain degree, some of these points are true. There have been casualties in recent years, The Big Chill and Sonisphere to name a few. Yet, saturation of the market is something that undoubtedly has to shoulder part of that responsibility, with festivals becoming somewhat victims of their own success. Especially when you take into account there are very few festival free weekends in the UK from June right the way through until early/mid September.

Evidently growing in size once again this summer, Kendal Calling is looking to stay in keeping with its increasing popularity and, yet, still remain consciously aware that they need to stay compact enough to retain its unique, exclusive qualities. It’s a move that sees the festival not looking to leave you feeling utterly bamboozled by its size, but extended ever so slightly as to not let the layout stagnate and become grimly predictable. Year after year, it has quietly continued an unrelenting growth and a steady evolution that could now possibly have set the groundwork for it to flourish into a staple English summer festival.