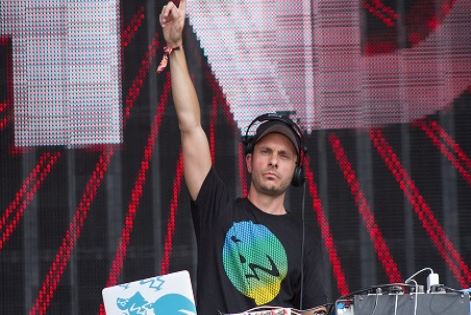 On Friday the 25th July 2014, a 55,000 strong army of ravers descended onto Long Marston airfield for what looked set to be a monumental weekend of raving, misbehaving, and high calibre electronic beats.

Global Gathering was back with a vengeance as it returned to Stratford-upon-Avon for its 14th consecutive year. The 2 day dance music festival – which has grown considerably since starting in 2001 – claims to be the biggest and best of its kind in the UK.

As per usual, 2014 saw a line up that struck an impressive balance between underground names and world-class acts. Mega-budget live shows from the likes of headliners The Prodigy and Chase ? Status could be seen alongside stripped-back sets from lesser-known DJ’s such as Dub Phizix and Special Request.

Over the years, the festival has booked an increasing number of mainstream acts. This year, for example, saw dance-pop chart topper David Guetta take to the decks, and Tinie Tempah embrace the mic. However, Global manages to pull this off by also featuring an extensive line-up which satisfies even the finest dance music connoisseurs, and the organisers must be applauded for this.

Before the arena had even opened on Friday, the atmosphere that Global has become renowned for was starting to bubble. The sun was out in full force as the campsites started to fill and the drinks started to flow.

A mass of eager revellers gathered at the arena gates, awaiting the all-important 5pm opening.

Once opened, thousands of rave-hungry punters flooded into the untouched, pristine arena as the various dance tents and stages started to hammer out a selection of bass-heavy beats.

The crowd had been released into their playground, and the weekend had officially begun…

The Hangar – a hotly anticipated area new for 2014 – certainly lived up to expectations, kicking the weekend off with a vocal-driven house set from Daddy’s Groove. The sheer scale of the colossal dance tent ?which is large enough to house a Boeing 747? was particularly impressive, and is a reminder of the extent to which Global has focused on the production of the festival in recent years

The Freight Depot area made a welcome return this year, featuring a largely underground roster of names such as Pedestrian, Kidnap Kid, Mele and Toddla T. Hosted by James Zabiela’s Born Electric label on the Friday, and David Rodigan’s Ram Jam brand on the Saturday, the Freight Depot – an intimate dance space built from stacked freight containers – was in a league of its own. The ‘hands-in-the-air’ vibe was quite often reminiscent of a Balearic boat party, and when the heavens finally opened late on Saturday evening during Dub Phizix’s set, the sweltering crowd went wild for his deep, minimal basslines and the sharp, quick rhyming of accompanying MC Strategy.

Friday night featured a stellar line-up on the main stage, with NZ Shapeshifter setting off the action. The 5-piece live drum and bass act played a blinding set, featuring hits such as ‘Monarch’, ‘Gravity’, and the crowd-pleasing Netsky remix of ‘The Touch’.

Shapeshifter’s eclectic blend of soulful vocals and lush, percussive dnb sounded fitting under the evening sun, and throughout the 45 minute show, the crowd gradually thickened in preparation for Katy B.

The South London songstress blasted onto the stage with a high energy set of upbeat electronic-chart, including classic hits such as ‘Perfect Stranger’, ‘Lights on’ and ‘On A Mission’. Some of her newer material was also featured, such as the heartfelt ballad ‘Crying For No Reason’; a slow, mournful record which could have easily sounded out of place in the given surroundings, but was, in fact, a welcome inclusion.

Although the vocals were at times shaky and underwhelming, the catchy tune selection and entertaining crew of dancers kept the crowd satisfied.

As the evening drew in, Netsky bought his highly acclaimed live show to the mainstage. He played a set similar to his 2013 appearance, but this can barely be a negative thing going by the reception he received.

As the Hospital Records wonderkid delivered a high octane vortex of heavy bass and piercing synths, his MC – Script – fired up the crowd, guiding them through a diverse and dramatic hour of bass music.

Script introduced vocalist Billie onto the stage as Netsky dropped classic tune ‘Puppy’, much to the delight of the bouncing crowd. The remarkable female vocals were undoubtedly the highlight of the set, and possibly one of the highlights of the entire Friday.

As Netsky drew his set to a close, the hungry crowd were left in the lurch as the main stage remained unoccupied for nearly an hour.

Elsewhere across the festival, the cauldron had started to boil. As the sun set for the evening, the vibe suddenly switched. The relaxed, warm vibes faded as the atmosphere intensified. Radiant neon lights and beaming lasers started to illuminate Long Marston airfield, and just as you thought the crowd couldn’t get any livelier, a mischievous night-time buzz started to spread throughout the festival site.

Chase & Status were en route, and Global Gathering was ready for them…

The crowd was at its most powerful yet as the chart-topping twosome appeared before them. Chase & Status arrived in style, kicking off the set with the brilliant reggae-sampled ‘International’. Mc Rage took the driving seat, hosting the show with his roaring vocal tones while seamlessly holding the set together.

The 2nd track thumped onto the speakers in the form of ‘No Problem’, with the crowd chanting along in unison. The well established DJ duo twisted in a bassier undertone of the popular tune, demonstrating their undeniable talent and ability to unexpectedly turn their tunes on their heads.  It is this unpredictability and spontaneity which accounts so much for Chase & Status’ appeal.

As darkness completely closed in on Long Marston, the crowd were covered in a blanket of lasers and treated to a visually astounding 75 minutes of heavy-budget production.

The surprises kept on coming, as Kanye and Jay Z’s ‘Paris’ is dropped in out of nowhere, sending the crowd into a frenzy.

The arguable contender for most emotional live tune of the weekend – ‘Lost and Not Found’ is played before ‘End Credits’, which brings the set to a close alongside a fascinating firework display and a rupture of applause which can be heard right across the festival site.

There‘s no question about it, Chase & Status stole the show on the first night of Global.

Acts such as Sub Focus, Gorgon City and Shadow Child played out until 3am on the Friday, with many festival goers bringing the party back to the campsites and continuing until the early hours.

With such a strong start the festival, the Saturday had a lot to live up to. However, it didn’t disappoint with near flawless appearances from Jaguar Skills and Andy C, and an unforgettable set from Radio 1 DJ Annie Mac. As a stunt plane looped around in the crystal clear sky above, Annie hammered tunes such as Kiesza’s ‘Hideaway’ and 2014 festival favourite ‘9TS’ by Redlight. Towards the end of her set, the 36 year old dance music icon dropped Duke Dumont’s ‘I Got You’, ensuing a picture-perfect festival moment.

As evening approached on the Saturday evening, the punters looked as lively as ever. The Global crowd have developed a reputation for their stamina and ‘party-non-stop’ approach, and it was evident 2014 was going to be no different.

High Contrast played to a packed out Hospitality tent early on Saturday evening, warming things up for an all-star line-up featuring the likes of Fred V Grafix, Sigma and Camo & Krooked.

The Hospital crew looked to be in full-swing throughout the entire Saturday, bringing their trademark fun and friendly vibes to a highly receptive Global crowd.

It wasn’t friendliness and fun everywhere, though. Chief headliners The Prodigy tore up the mainstage with nearly 2 hours of dark yet spectacular old-school rave goodness. With the longest set throughout the weekend, the 5 member band played to the biggest crowd seen across the weekend. The stage production was second to none, complete with a full laser show, smoke cannons and rupturing fireballs.

The set got off to a flying start with frontman Keith Flint bounced around the stage in trademark fashion as the Essex-based world-class act churned out a list of hits including ‘Voodoo People’, ‘Out Of Space’, ‘Firestarter’, and ‘Omen’. Yet, the show did seem to flatten out slightly later on, as the band showcased their upcoming album. You can’t blame them for trying, but the reality is, audiences at big shows like this want well-known hits rather than new material.

Nonetheless, many people would have payed the price of a Global Weekend Camping ticket to see this overall epic live show alone.

The Prodigy had sent the Global crowd to their peak, as Long Marston buzzed harder than ever.

The dance tents filled to their capacities as quality acts such as Eric Prydz, Alesso, Wilkinson and Jamie Jones kept the crowd going strong until 4am.

Shy FX bought his jungle/reggae vibes to the UKF tent, closing the festival in true style. Classics such as General Levy’s ‘Incredible’, Shy FX’s own ‘Original Nuttah’ and ‘Shake Your Body’ were hammered home for the final straight.

It seemed rather fitting for such an old-school name to close the curtains on Global 2014, it’s a reminder that although on the surface it might seem like Global is trying to appeal to the mass, commercial audience, the festival has – in many ways – stayed true to its roots.

With a line-up that boasted over 150 DJ’s and acts, a remarkable production team that bought us a diverse range of interesting arenas, and a crowd which didn’t stop until long after the curfews, Global’s bold claim to be the best festival of its kind is one which can be made with pride and confidence.