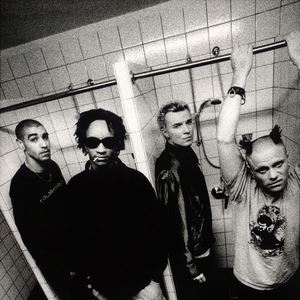 The Prodigy are a Braintree, Essex, UK, electronic music group (aka Prodigy), formed by Liam Howlett (composition, keyboards), in 1990. They have sold over 20 million records worldwide, which is almost unequalled in dance music history.
Their music consists of various styles ranging from rave and breakbeat hardcore in the early 90s to alternative rock and big beat, with punk vocal elements in later times. Other current band members include: Keith Flint (dancing, vocals), Maxim (MCing, vocals) and live guitarist Rob Holliday (Marilyn Manson, Gary Numan, Curve, Sulpher).
Leeroy Thornhill (dancing, occasional live keyboards), was a member of the band from 1990 to 2000, as well was a female dancer / vocalist Sharky, who left the band during their early period. Other notable former live members include: Gizz Butt (guitar - English Dogs, Janus Stark, Sabbat) - toured with the band for three years throughout the late '90s, Kieron Pepper (drum - Realtv, Happy Gilmore) - played for the group from 1997 to 2007 (also contributing to the solo projects of Maxim and Flint's band, Flint), as well as Jim Davies (guitar - Pitchshifter), who also performed in Flint.
The Prodigy first emerged on the underground rave scene in the early 1990, releasing their début LP Experience (1992) and have since then achieved immense popularity and worldwide renown. Some of their most popular songs include "Charly", "Out of Space", "No Good (Start the Dance)", "Voodoo People", "Firestarter", "Breathe" and "Smack My Bitch Up".
The name displayed on album covers changed from 'The Prodigy' to 'Prodigy' between Music for the Jilted Generation and The Fat of the Land (1997) and back again with the release of Always Outnumbered, Never Outgunned (2004). However, Howlett has attested the title has always been 'The Prodigy' and the change was made only to fit within the displayed logo.
Maxim originally began as an MC for the band before doing vocals on "Poison", a track on their second album Music for the Jilted Generation and then several others on The Fat of the Land. He remains a member, MCing at the live shows.
Flint began as a dancer for the band before moving on to become a vocalist initially on the track "Firestarter" but then for several others on the third album The Fat of the Land. Flint is probably the most visually recognisable member of the band and considered by many to be the front-man though he has very little input to writing the songs. He still sings with the live show but has virtually no input on the albums however, he did write the single "Baby's Got a Temper".
Following the relative commercial and critical failure of 2004's Always Outnumbered, Never Outgunned the band released a greatest hits Their Law: The Singles 1990-2005 before 2009's return to form Invaders Must Die.
After the release and success of The Fat of the Land, Howlett was feeling down as he could not produce any songs up to standard up until one of his friends showed him the program Reason from Propellerhead Software. This program inspired him who instantly went to the studio and started producing tracks using it; he decided he did not want to use it for baselines though, as he prefers the analogue sound.