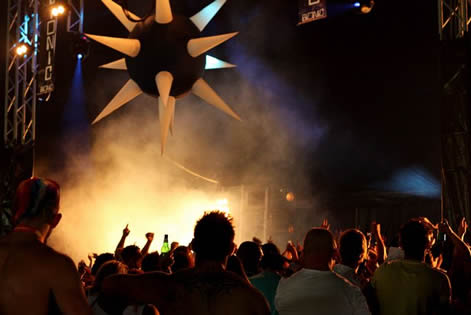 Well the rain gods were certainly elsewhere on Saturday for the biggest dance music event on Welsh soil.  Thousands of festival-goers from across south Wales and further afield flocked to Singleton Park in Swansea for the annual Escape Into The Park event.  From early Saturday morning, whether it was mini-buses coming down from the Valleys or trains coming Newport and Cardiff, it was evident Swansea was under siege from neon-clad house fans hell-bent on making the most of the area's biggest party.

Acts including Chipmunk, Tinchey Stryder, Judge Jules, Headhunterz and Eddie Halliwell demonstrated how hard the Angel Music Group has work to keep this event alive when many others have fallen by the wayside.  This is a tough economic climate though and whilst thoughts of money worries were far from any attendees mind, they certainly must have been a concern for the box office team.  This year's event attract only around half of the numbers regularly seen and this was evident throughout the day with none of the stages really attracting sufficient crowds to give the all-encompassing festival vibe.  Certainly more main-stream acts such as rappers Chipmunk and Tinchy Stryder were muted as possible causes for the low numbers in a festival that's usually the year's highlight for more hardcore house fans.

That's not to say the fans who did attend did so with any less enthusiasm though.  The sunny weather certainly got everyone in the mood after a week of rain in the region and by mid afternoon the park was alive to the sounds of heavy baselines, screams from the fairground rides and the sight of people getting the party started.  Everywhere you looked there were people dancing, be-it whilst strutting across the fields, in a group or just out there alone.  If the mainstream acts brought anything though it was diversity.  The crowd displayed the usual mix of costumes, scantily clad girls and muscle-bound lads, but also younger teens and more conventional festival patrons in rainbow colours and chic dresses.

The main stage enjoyed the best of the sun and acts Neil Navarra and Chuckie kept people enthusiastic throughout the afternoon.  Situated in more of a natural amphitheatre it provided the daytime atmosphere for those content to relax on the grass and sun themselves.

If a club atmosphere was your target early on though the Bionic and Trance tents certainly swapped the sunlight for the noise.  Lisa Lashes played a solid set in the Trance tent for those whose party had started early although the lower numbers never quite managed to provide the spark that'd make a good party a great one.  You had to feel for the DJs, many of whom have been in regular attendance at the event for years now.  Its got to be hard to really get into it when you're playing to a couple of hundred people rather than the thousand or so those smaller stages have seen previously.

Disparity didn't help either; after a couple of decent DJ sets on the main stage singer Yasmin came on with a more mellow beat and the dulcet tones of 'On My Own'.  Heavy drum riffs over a cover of Everything But The Girl's 'Missing' attempted to get people bouncing again but was still a more laid-back affair than the previous MCs heavy drum & bass ensembles.  The Main Stage then later produced Radio 1 favourite Jaguar Skills with his synonymous Ninja face-covering and heavy house mixes.   Again he was well-received by avid fans but it was evident the audience also contained a lot of teenie-boppers waiting for Chipmunk to come on.

If it was a hardcore party you wanted there was really only one place to be all day- the Bionic arena at the top of the site provided endless hours of heavy house music often overlaid by local hero Shocker's electric MC-ing.  Indeed the Bionic resident spent over 5 hours on stage throughout the day winding the crowd up and demonstrating how his crisp vocals (and level of fitness!) meant he could man that stage as long as he wished.  With a great light show and frequently refreshed podium dancers the tempo never dipped throughout the one-day event.

Overall the crowd were enthusiastic, good-natured and everyone was there to enjoy some great music in the sun.  Its just a pity that in an attempt to cater for a larger audience the event may have sold out its traditional fan-base.  Hopefully 2012 will demonstrate otherwise....