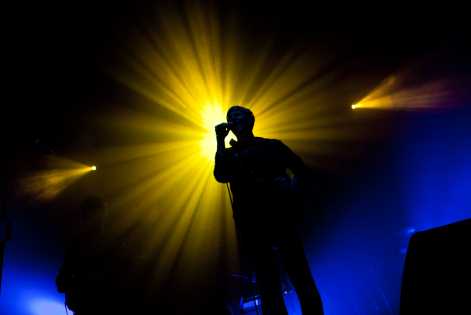 This was my first year attending any of the Dot To Dot events taking place in a small number of selected cities across the country. Over the weekend, a huge number of acts performed at the one-day events held in various venues throughout Bristol, Nottingham and finally Manchester. Having no idea what to expect, I’d envisaged a SXSW inner city vibe – minus the sweltering Texan summer heat and impromptu car park performances from Jack White.

Being a native Mancunian, walking around the city during the event gave me an overwhelming burst of civic pride. Watching people from all over the country and Europe descend on the city to catch artists like The Drums, Willy Mason, Pulled Apart By Horses and Gabriel Bruce is something that everyone undoubtedly wants to experience on their own doorstep. Yet, the buzz around the city not only came from Dot To Dot setting up shop and the Queen’s diamond jubilee celebrations, but from the excitement as a city on the whole at the moment. With Manchester City finally ending a baron spell of 44-years without winning a league title, The Stone Roses seemingly set to conquer the world and a mammoth homecoming show at Heaton Park, the feeling around the city is incredible. That is if you happen to be Chloe Sevigny of course.

An enormous plus point for Dot To Dot was that the venues selected were all relatively close together, allowing you to dart in-between them and cram in as many bands as you wanted over the course of the day. Another plus point, on a personal level, was that some of the venues that were selected also happen to be my regular haunts. One of those was Sound Control and its dank, dimly light basement played host for Gabriel Bruce’s set. With industrial sized steel pipes, ventilation shafts running across the ceiling and bare-brick walls, it perfectly complimented Gabriel’s trademark macabre pop music. I’d managed to hear his wonderful version of his take on Sam Cooke’s classic ‘Cupid’ and Bruce’s single ‘Sleep Paralysis’ before his performance on Monday, leaving me with the impression his live set would be a rather sombre affair. Yet, the live set couldn’t have been further from his studio versions. But that was by no means a negative. His live sets are filled with an incredible amount of energy and a sort of strange, sexual vigour that Bruce oozes to his audience. Gabriel has the snarl and tone of Lux Interior, but still manages to keep a brutal pop sensibility to his songs. He’s by far one of the most exciting artists I’ve seen in a long while. Not only due to songs like ‘Dark Lights Shine Loud’ being insanely captivating, but his presence, his dry humour, performance and charisma that could enable him to sell ice to an Eskimo. Accompanied by just two female backing singers and a DJ, Bruce gave an energetic performance that was by far my runaway act of the day. To me, Bruce seems to be the real deal. It’s a special moment at a gig when you get the feeling you’ve just seen an artist that’s about to rapidly outgrow their surroundings. And, I don’t think it will be too much longer before more of his dark, dirty pop will be infecting your brain, too.

Another exciting act that were performing just a short walk across town were Two Wounded Birds. It’s been a few years since I caught up with them live - I’d last seen them at a blistering hot Glastonbury a couple of summers back as a festival goer. But, due to the copious amounts of alcohol consumed over that weekend, only a few snippets have managed to remain in my memory and all the other parts completely obliterated. What I do remember of their Glastonbury performance is that they clearly have a blueprint they stick to. They also seem extremely assured in their abilities to create these appealing punk-pop ditties and know exactly which direction they want to propel themselves in. And, that amount of certainty that almost borders on arrogance is by no means a bad trait to have this early in a bands life. The leather-clad rockers clearly have their roots set in surf-pop, psychobilly and punk. These influences come together to create their infectious brand of surf-pop that’s extremely difficult to not hum, whistle or stand still to while they are performing – as the one solitary punk pogoing at the front during the track ‘Together Forever’ will testify. After a few hiccups, a rather uneasy looking opening track and the lead singers grouchy request for the sound engineer to “turn the lights off”, they viciously tore through their half hour set. So much so, they finished a good ten minutes early, much to mine and many other people’s disappointment - the crowd slowly filtering out in a daze after they were well and truly beaten into submission by a blitzkrieg of pop-punk at it’s finest.

The Drums were headlining The Ritz off Oxford Road and a few buildings up from where legendary nightclub The Hacienda used to reside – now a block of luxury apartments. If you didn’t already know The Drums were hip New-Yorkers, you’d swear blind they’d just strolled across of town from the cities stylish Northern Quarter. Singer Jonathon Pierce seemed well aware of his surroundings and gave a firm nod to the cities musical pedigree and heritage when declaring that this would be the group’s last show in England for a year and how pleased they were to be finishing up in Manchester - “A city that has inspired us and so many great bands and us. We love your city.” Whether or not these we’re idol compliments, only he knows – but there is no better way to have a Mancunian crowd smitten with you than to compliment their beloved city. The one thing the group were hell-bent on doing with a huge amount of sincerity was having The Ritz’s notoriously bouncy dance floor tested to absolute breaking point. Although it was a Monday evening, Pierce urged everyone to “pretend it’s Saturday or something”, yet the crowd were already way ahead of him. With ruckus renditions of favourites ‘Money’ and ‘Let’s Go Surfing’, the Manchester crowd didn’t need telling twice to act like it was the weekend. Although the new material from their forthcoming album ‘Portamento’ didn’t receive the same exuberant pint-throwing seal of approval as the rest of the set, it seemed to neatly nestle amongst what are already seemingly instant classics from their back catalogue. There have been some troubles within the camp, yet the group seemed genuinely united and bowled over by a rapturous reception. For a group that were all but on the brink of collapse in the not so distant past, there is no way you’d have guessed it. Or maybe they are putting on a united front before their year off from the UK, who knows? Let’s hope not and they return with more of the same catchy-melancholy that their fans seem to have grown so enormously fond of.

Dot To Dot seemed like a statement of intent at how a summer of music is going to be not just in Manchester, but also right across the UK. If some of these groups continue to attack their remaining summer sets with such ferocity and the events are orchestrated as well as this one had been, then we’re all in for a remarkable summer of live music.