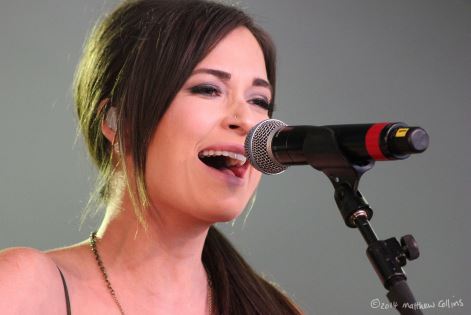 Arriving in your festival season just a week after Glastonbury we have the three day Cornbury Festival or ‘Poshstock’ as it’s sometimes known. This festival celebrated its 10th year last year and is now firmly placed in the festival calendar.

This is my first visit to Cornbury. A more sedate affair than other festivals I have visited but with a 7 year old in tow this is in its favour and a good place for my son to start his festival experience. Settled in its venue on the Great Tew Park in Oxfordshire after a move in 2011, it offers a welcome of classic sounds, new talent and family friendly feel.

The complete festival experience is not just about the music but an eclectic mix of comedy, music, children’s entertainment, unique vintage cinema, spa treatments, fairground rides and gourmet caterers and even a wedding reception this year. Congratulations to the happy couple!

The weather stayed mainly dry for this year’s festival but as usual, footwear varied between flip-flop and wellie. I was on the look- out for the slightly controversial Native American headdress and although some were spotted, the daisy chain seemed to be the hair adornment of choice at Cornbury.

I am here with husband and my 7 year old son so we are straight in to discover the delights of the children’s area. From first sight it is obvious that children are very welcome here. This is vast and fantastically organised- from bouncy castles to merry-go-rounds, circus skills to tempt the budding performer, to clay workshops and a large craft and making tent. Stilt walkers mingled with the crowds dressed as Watson and Holmes.

After a few moves to groovy tunes at the Disco Shed we were quickly drawn to join the throng to hear about the pirate queen Anne Bonny and the Battles of Fort Charles where tales of hanging smugglers from the castle walls drew a mixed crowd of blood thirsty historians all completely engrossed by this miniature re-enactment of the wars between the English and the French. My son loved this and I would highly recommend this performance by Chris Brown. Particularly favoured by those of a bloodthirsty pirate persuasion.

There’s a huge variety of food stalls to tempt you- from gourmet burgers to pies from Barnaby Sykes but as with most festivals be prepared for higher prices. If this doesn’t deter you I would suggest a visit to Paelleria- the flavours of Spain in a beautiful chickpea and squash paella. Something spicier was the order of the day on Sunday and we sampled the culinary delights from the Curry Shed- I would highly recommend the delicious Paneer Butter Masala and Saag Aloo.

Comedy was provided by acts such as Al Murray, Mark Watson and Jeremy Hardy. We caught a little of the very funny Rachel Parris on Saturday afternoon.

The music at Cornbury takes place mainly across 3 stages- the smallest being the Riverside with hay bale seating, the Pleasant Valley main stage and then smaller Songbird stage.

Back at Cornbury after their appearance in 2007, The Feeling had definitely returned. Giving us everything- from greatest hits medleys of songs including Pinball Wizard and Day Tripper to their own songs like ‘Fill My Little World’.

A steady drizzle arrived later on the Friday but that didn’t deter enthusiastic crowds. I have a great fondness for Suzanne Vega and her versatile set took me back with ‘Marlene on the Wall’ and I also liked her newer tracks such as ‘Jacob and the Angel’ and ‘Fools Complaint’.

The Friday crowd were then treated to Jools Holland who wowed us with special guests Marc Almond and Mel C.

A trip to the Other stage on Saturday where Tom Hodgekinson inspired us by telling us of the power of the humble Ukulele. Not only can we learn to play the Ukulele very quickly going from a first lesson to giving a concert in six weeks, we can also annoy a lot of people whilst doing so, including most of the members of your family. A result in my book!

Among Saturday’s musical offerings was Southside Johnny and the Asbury Jukes who filled the stage with their rock and roll bar band sound. With a voice filled with a bluesy gruffness, singer and front man ‘Southside’ Johnny Lyon took us straight to New Jersey via tracks such as ‘Harder Than It Looks’.

From the gutsy vocal performance of the very talented Lissie (what an amazing voice) to Nashville’s Grammy award winning Kacey Musgraves, whose country music songs of Texan trailer parks drifted across green fields in the English summer sunshine.

The very popular Scouting For Girls drew a mixed crowd of both young and old at the Pleasant Valley stage where the audience were invited to be the fifth member of the band ‘doing backing vocals and dancing’. They engaged the crowd with their energetic uplifting set with songs including ‘Heartbeat’ and ‘Famous’. I can’t believe they have been around long enough to have a greatest hits album which was released last year.

We were then back to the 1980s or so it seemed as Simple Minds took to the stage as the closing act to a memorable Saturday at Cornbury.

Sunday brought us more sunshine and X-factor favourite Luke Friend wowed us on the Songbird stage.

Announcing that ‘somebody’s beating on the jungle drums at Cornbury‘ -Kid Creole and the Coconuts took to the Pleasant Valley stage. Resplendent in pink zoot suit and dedicating the song ‘Annie I’m not your Daddy’ to anyone over the age of 37. He was the perfect musical accompaniment to a sunny Sunday afternoon. As the man said, ‘I am the original guy and I wear my trousers high’.

2013 British Blues award winner Marcus Bonfanti stormed onto the Songbird stage to bring us a blues set that showed his guitar skills and gutsy vocal style to their best advantage.

Finally what a finish to an amazing festival from the spectacular Peatbog Faeries on the Songbird stage over to the legendary Gipsy Kings. Equipped with our free flamenco rumba dance lessons we were ready to party. It was their only UK performance this summer in their 25th anniversary tour. A sing-along to ‘Samba Samba’ warmed us up and we ended a great festival on a high with ‘Bamboleo’ of course. A perfect end to this sunny summer festival.

Published on 09 July 2014 by Mattcollins