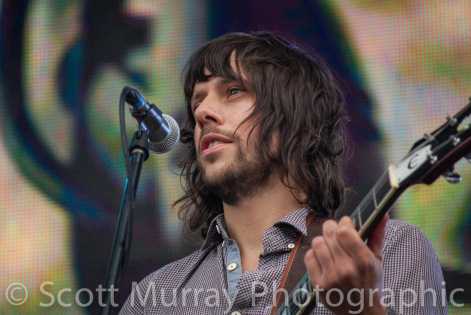 Chester Racecourse opens its gate (that’s correct, singular not plural, more on that later) for the second year running in a bid to entertain the masses with its signature styled two day rock and pop fusion. Myself and my trusty partner in crime covered this event last time and it was of some interest to us noticing several factors that had changed from our previous visit. There was no onsite parking, bringing of food or drink into the race course (apparently people were able to bring picnics in 2011) and the second stage had been abolished altogether but the biggest difference was in the line up, which was also arse about face this time. Saturday last year had been the teen friendly family orientated day out , while Sunday was the haven for the beer swigging festival fan. This year, Saturday housed the oiks and Sunday was your safe bet. Another key factor that differed from the previous year was the weather. Rewind 12 months- we had (for the most part, anyway) glorious sunshine. Fast forward that same amount of time and we had (for the most part, anyway) rain soaked misery. So you could say it was a year of change within Chester’s walls not least in the amount of access that was afforded to the press this year. Back in 2011, press had access to the V.I.P area (which was a marquee that served nice food and had decent toilets), and the golden circle which is an area at the front of the stage offering a slightly better view of the stage. This year, the V.I.P. area was a total no no, while access to the Golden circle was granted to us on Saturday (depending on who was doing the security at the time) before being revoked all together the following day. The lack of communication and commonsense being exhibited over the course of the weekend,. plus the attitude of certain staff members, at times really was quite astonishing in its ignorance, so much so that at one point this was going to be a two word review… CHESTER SUCKS! But, it would be hugely unfair of me to paint and tar everyone with the same brush, as the majority of the stewards, security and bar personnel all performed very admirably indeed, and I really am not particularly concerned with access to exclusive areas but don’t give it to people one year, send them a press release stating they have access to the same areas the following year and then change your mind on the day.

Anyhow, moving on. The first band on to the stage on Saturday was The Fifth Movement, a group who’d won a ‘battle of the bands’ type competition to gain this coveted slot and one which they utilised to their advantage and proceeded to impress the crowd with their particular melding of folk, rock and a hint of classical. It was just a pity for them that the crowd at that point consisted of about 12 people (the weather didn’t help) as they deserved to be seen by more. During the changeover we took a stroll around the main area to see what it had to offer, which as it turned out was much the same as the previous year- fairground, hat stalls, people plugging some local charity and the newly added Body Bash which had the foolhardy climb into zorb balls before pitching them against one another in an impromptu arena of combat housed behind a completely unfit for purpose net fence. It wouldn’t be long before some scene of unintentional hilarity ensued and right on cue we bore witness to some poor girl getting completely pole axed by one of the things as it exploded, through what they laughingly referred to as ‘the barrier‘, like that boulder at the start of Raiders Of The Lost Ark.

Back at the main stage, Chester’s very own The Suns were entertaining the now steadily growing crowd with a set that began as a Skiffle-esque lo-fi racket before veering into a Gothabilly fusing of West Coast

Surf Rock, Country and Blues. The band all suited and booted finished on an instrumental that featured some mean gob iron from the lead singer. Following on from this was Liverpool band The Fallows who opted to impress with their more contemporary musical styling’s (think Razor light) giving their fans an exclusive airing of a new track titled “Shut Your Eyes” before fellow Scouse Alt-rockers Sound Of Guns took to the stage and gained attention particularly when lead singer Andrew Metcalfe decided to stage dive and greet the crowd. Fellow men at arms The Rifles opted for a more low key stage presence but impressed the crowd no less with their emotive indie rock and apparently Paul Weller is a big fan. Scots post-punkers The View took to the stage and gave their fans exactly what they had journeyed all that way to see. It’s worth noting also that their drummer was spouting an awesome handle bar tash, It was up to Britpop old guard Cast however to show these newbies how it’s done with a scintillating set that featured the classics Sandstorm, Alright and Free Me, before the band that the majority had come to see a.k.a The Corteeners took to the stage. As a muted point of digressional interest a rumour had been spreading throughout the day that upon Liam Fray and the boys’ entrance a full on stage invasion was going to take place. This lead to the security getting decidedly edgy around that time and saw them doubling up at the front in anticipation. Like most rumours however it turned out to be completely unfounded with The Courteeners walking out to The Good The Bad And The Ugly theme and launching into a set that, as far as I can tell, was relatively event free, with the exception of some Darwin award candidate throwing a flare at the stage which came uncomfortably close to lead singer Fray on the stage and dangerously close to Scott in the pit who was taking photos at the time, so well done to that aspirational vacuum. Where problems did arise though (apparently) was after the gig finished. For whatever reason, the organisers decided that everyone was to leave via the main entrance ( which is not very wide) and not to ferry people out of any of the other exits including a large main gate that is used primarily for vehicle access. The end result was a lot of people having to wait around for an uncomfortably long time, whilst the foot traffic was filtered out of the grounds via one channel. This considerable delay lead to several people being stranded in Chester overnight because they had missed their train or coach, in fact so desperate were some they resorted to scaling gates and fences in a bid to catch their all important connection. We personally did not witness this as we had departed earlier in order to beat the traffic, as I say it’s second hand information that was fed to us mainly via Twitter. If it was the case, however, then this is another issue that needs to be addressed by the organisers, to ensure that it does not happen again as it’s not particularly pleasant being stuck in a strange city overnight. Just as potentially dangerous is the fact that that many people in a confined area over an extended period of time runs the risk of causing a flash point and you really don’t want that or its aftermath.

Sunday’s line up as I stated previously was one for the kids. In keeping with this family vibe, first out onto the stage was 19 year old singer song writer I Am Tich, who in fairness possessed a surprisingly mature grasp vocally and lyrically for someone so young. Tich was swiftly followed by Britain’s Got Talent runners up The Loveable Rogues who entertained the squealing tween’s with their own ditties Honest and Say You Love Me and covers of Ed Sheeran‘s The A Team and Posh Girls By Scouting For Girls, the latter of which when done by these guys sounded a bit like something the Macc Lads might do at secondary school. Following a change over and wander around the site for me to grab a bite to eat it was time for Ghanaian entrepreneurial grime merchant Tinchy Stryder to own the stage along with his DJ Spiro, before allowing two of Hackneys big hitters, Hip Hop and R&B titan, Labrinth and Dub steppin reggae fuser Maverick Sabre to have their own piece of the crowd-appreciation cake and eat it.. Finally the main stage played host to two sisters who were outdoing it for themselves, namely House and Garage gal Katie B who did a cover of an Annie Lennox song actually, Sweet Dreams ( wasn’t that good) and pop starlet Pixie Lott who rounded of the days proceedings much to the delight of the Young un’s and a lot of the older male members of the crowd also (check out the photos!) and that, right there, ladies and gentleman is your whistle stop tour through Chester Rocks 2012 !