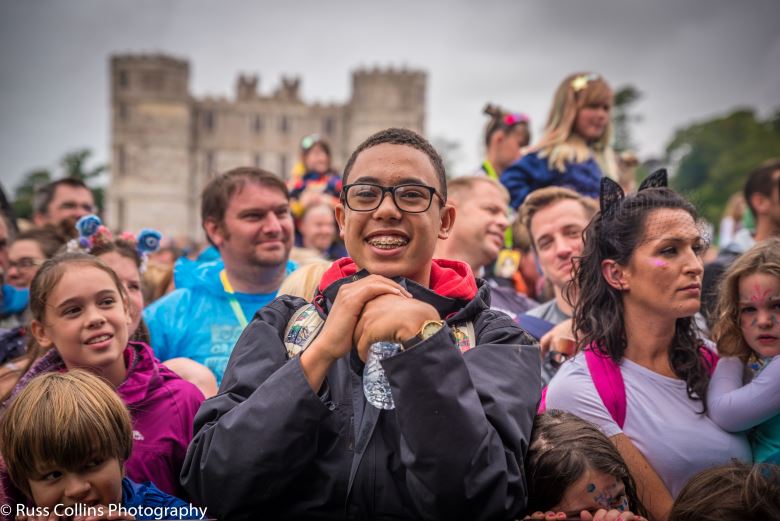 Camp Bestival is the family friendly festival from Rob Da Bank and team; Younger brother of the fantastic Bestival built around creating an enriching variety of experiences for all of the family to enjoy.

There really were so many things to do for children of all ages, with nice touches like nappy change tents and free drinking water available around the site as well it really feels like the team had thought of everything you and your family could need to have a thoroughly enjoyable weekend. You could have done a different activity every hour over the whole weekend and still wanted to come back for more.

In the Magic Meadow area you could get crafty with one of the many workshop sessions. In the kids field there were science experiments, performances like the wondrous Insect Circus, sports activities to try, circus skills to learn and delicious WI cake to eat… we especially enjoyed the Power Ranger wearing Punk Rock Scientists teaching kids, and adults, science by musical stealth.

Before we talk about the music this year let’s not ignore the elephant in the room, or rather the mud in the field... it rained, a lot and it was windy at times… but at other points the sun shone and overall it didn’t dampen the spirits too much.

When you consider this is the first time in its 10-year history that it has rained, we think that’s an ok ratio (and I’ve been rained on every single time I’ve been to Glasto).

Set in the grounds of Lulworth Castle amongst gorgeous rolling Dorset hills, it’s testament to the viability of the site and the team how well it coped with the not-so-great British Weather.

Given the volume of rain and 40mph+ winds on Friday and Saturday most things remained open as planned and, although muddy under foot, the site coped very well indeed. We think we can forgive them closing the world’s largest bouncy castle for two of the days too.

The Blockheads were a big draw in the big top on Saturday and Derek Hussey does justice to the memory of Ian Dury with a menacing cockney swagger and stage presence to match.

We had a few flashbacks to the 80s over the weekend, singing along with T’Pau on the main stage as she belted out more songs than we’d like to admit we knew and dancing like happy pigs in the mud to Sara Cox’s 80s party set by the giant disco ball.

Madness were the perfect Saturday headliner, doing a great set with a mixture of newer and classics to get the crowd jumping around.

Reverend and the Makers, The Lightning Seeds and Kate Nash all belted out solid shows on the main Castle stage over the weekend, with Right Said Fred bringing sexy back on Sunday afternoon.

Brian Wilson was the elder musical statesman on Sunday – a firm crowd favourite, with cheers as the sun came out mid Pet Sounds set, then as darkness fell the bass grew with Leftfield performing Leftism building the energy up to the grand finale and fireworks over the castle.

The eclectic musical line-up included a fair few unlikely, but mostly brilliant, mash-up and cover acts over the weekend. The greatest of these and our favourite band performance of the weekend was Elvana – the Elvis fronted Nirvana cover band.

Part comedy, part epic sing-along where you never quite knew what was coming next. Any group that can throw Elvis classics into the angst grunge of Nirvana to this standard is sheer talent. We laughed, we sang and we jumped around. Thank you Elvana!

On the Friday the oddly cheerful Mexican Morrisey band ‘Mexrissey’ filled us with joy and happiness, not entirely the emotion Morissey intended for his songs I’m sure.

Over at the Oberon Observatory, situated in the middle of the lower kids’ garden, we were treated to a selection of good acts over the weekend – from the crowd pleasing, pop shuffling sounds of Thrill Collins, through folk idol and country music from the likes of the very talented Laura Oakes as well as pieces of theatre.

Stand out act for me at the Oberon was the edgy and wonderful Graceland. They deserved to be on a bigger stage. I found it hard to describe their musical style, but my best explanation would be if you took the synths from Goldfrapp with the metal and attitude of Courtney Love/Hole you’d be pretty close.

Caravanserai was an eclectic collection of caravans, waltzer cars and sheds cobbled together with music, dance and good food. Great to take a seat and see what comes on.

There was literary and comedy to see as well with Reginald D Hunter drawing big, not so family appropriate, laughs in the big top on Saturday afternoon, with Gary Delaney punning it out the park with his incredible one-liners.

There was a little corner of the castle that deserves a special musical mention, the Pimms tent next to the Courtyard… no, not just for the Pimms, although we did enjoy one or two.. but for the selection of great local singers curated by Si Genaro. We were literally stopped in our tracks as we walked past by the emotive raw power of Tara Flanagan, do your ears a favour and go search her out on YouTube right away.

There was a good variety of award winning food available, from the artisanal flavours of The Feast Collective in the upper kids’ field to Zebra burgers at the side of the Castle stage, some great Vegan and Vegetarian offerings, and plenty of family favourites for even the fussiest of eaters.

With backstage VIP camping, boutique, campervan and caravan areas, non-family, pre-bookable pitches and accessible camping Camp Bestival offers a good range or camping options over the weekend, suitable for all budgets and requirements.

If you missed Camp Bestival this year, tickets will be on sale for 2018 very soon at campbestival.net or check out the more line-up driven Bestival in September with headliners: The XX, A Tribe Called Quest, Pet Shop Boys, Dizzee Rascal and Justice, this year also at the Lulworth Castle site for the first time.