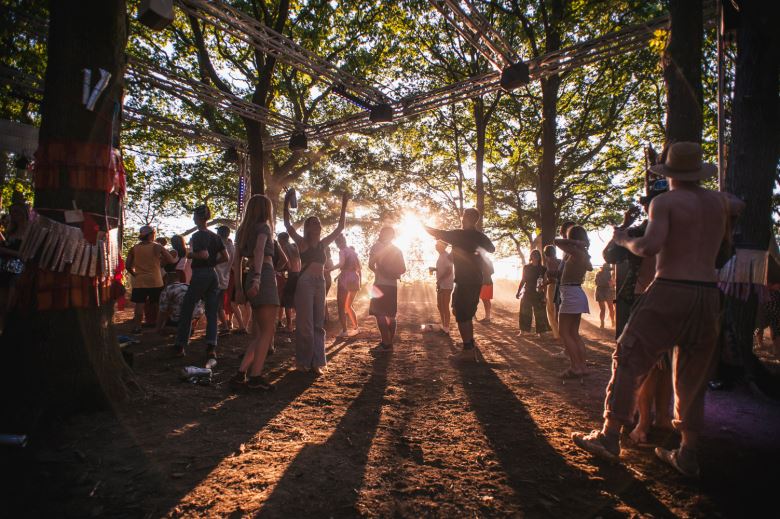 In the fields of Sussex a collective of artists, musicians, thinkers and dancers all gather to take part in what is now more of an immersive, collaborative movement than your average music festival. Based on the idea that a Festival should be an open experience, the concept is about events being a two way process – where punters are invited to be participants rather than just observers. There is a strong ethos pushing young and underground talent and the event is built on a foundation of social progression, discussion, creativity and openness. As a result it attracts a rather delightful artistic and socially conscious crowd and seems to be a hub for the LGBTQ community.

Upon arrival it does not take long to realise that I am in the middle of something special. The first striking feature is the care put into the décor. This is all very obviously home made in a make do and mend style, but with the class and vision that comes from an artist’s touch. That touch is entirely provided by the hard work of volunteers, is sustainable and an instant breath of fresh air from the consistently familiar and over worked industrial style lathered on the scene. There is a lot of scaffolding, but it is worked in such a way, with colour and texture and shape that it takes on a whole new distinctive form and sets the tone for a weekend altogether new.

Musically all weekend felt like a dream, with a careful balance of jazz, funk and world sounds in the day and a slow progression into the electronic lure of the night…

Perhaps Brainchild’s biggest success story is its ability to create acts and musical partnerships by curating jams and cyphers. These workshops invite singers, mc’s and musicians to create their own soundscape under the guidance and influence of the world around them. Both the beat workshop and the MC/vocal cypher were absolutely rammed and were a testament to the audiences desire to live the concept and get fully involved. It was a delight to see members of various bands that played throughout the weekend jump on stage to morph into something new. The energy this collaboration created went way beyond encouraging into a whole new level, with a result that had the whole tent vibing throughout. I have never seen anything of this sort done this well at a festival before and to say it was refreshing is a heavy understatement! This has clearly been a process at the heart of the festival for some time. As the weekend went on many of the acts paid tribute to the festival and its organisers, revealing that they had actually met at the cyphers and were proud and humbled to be booked to play. Both Woom (the incredible and haunting female vocal group) and NiN8 Collective (a dope 3 way neo-soul/ hip hop crew) met in this way and were two of the standout performances.

Elisa and Srigala continued to represent the strong hip hop element of the festival and showed us what the duo have been upto with nice simple Dilla style jazz-hop beats. The two have an unusual set up, one singing (in a smooth and undeniably Badu style), the other MCing in unison (with each mimicking the others content and harmonising the flows). This is rarely done in this format and sounded great, their first EP ‘Differences’ is certainly worth checking out.

Hush Moss brought the drivetime disco vibes with spaced out tropical 80s sounds. The frontman spent the whole set stood in the crowd at the main stage grooving out and loving life and everyone danced like their lives depended on it in the baking heat. This was genuinely like an Austin Powers montage – I really hope there is lots of footage!

ARIWO took things to a whole new level and lead the crowd through a truly unique journey of sound. Hailing from Iran and Cuba this quartet are self-described as the ‘intersection between electronic and ancestral music’. Opening with very slow early dubstep style basslines and snake charmer-esque saxophone, the set moved through crunchy downtempo house and all the way into dark funk. Throughout these slick changes the drummer traded between a traditional kit and djembe/bongos. The saxophone was absolutely unreal and the hybrid Cuban/ Iranian influences could both very clearly be heard as the intrinsic element, carefully layered and sampled to form a sound that held the audience from start to finish. This was by a long shot my festival highlight.

In the daytime the DJs home was the Lemon Lounge, an eclectic hub in the heart of the campsite. Here we were treat to an array of genres, with the acts clearly enjoying the freedom to experiment and switch up their style throughout their sets. Happy Cat Jay went from tribal footwork through funk house and even managed to pull off a Dr Dre vs Caspar and Rusko mix that certainly took me by surprise! Lightfoot played a strictly dub and roots set with plenty of tough 45’s and drew for some hard Stand High Patrol tracks that went down a treat in the afternoon sun. Marina GB showed us how she got onto Gilles Petersons Worldwide FM with a beautiful neo-soul and 140 set of pretty much strictly female vocals, that soothed us through and prepped us for the evening ahead…

The Shack was the home of the forest party and led us into the other side of the festival programming. Although this all seemed a little separate from the rest of the story, the forest held its own with a serious 360 scaff rigged sound system and a DJ booth that resembled a geometric fortress. This space saw some serious sets from Shanti Celeste (who was the first person to really make their mark on the interesting sound set up) and Jossy Mitsu who took a classic 4x4 set up and laced it with garage and grime. There was one man, however, that completely stole the show in the forest and that man is Maxwell Owin. Having watched him play two sets at Brainchild I am completely stunned that we haven’t seen his name on more line ups this summer… this guy is one of the most technically brilliant DJs floating around at the moment for sure. With an aggressive style akin to the likes of Chimpo and EZ, Maxwell took us on an exploration of footwork, jungle, garage and house. Skipping intros for drops and surging energy through the crowd with a huge grin, Maxwell brought the necessary intensity to get us all through the last night. Without a doubt one of the best DJs I have come across in a while – this is one to watch.

How to conclude such a story… well if I’m being honest this was my favourite festival of the summer so far and it is the first one I will be mentioning to friends to pencil in next year. The whole approach is endlessly refreshing. So many of the acts were under 21 and up and coming, those that were more well-known were tastefully selected, there was an array of workshops promoting sustainability, understanding and progression and it was just an all-round celebration of everything that is good about the artistic UK that we live in. This festival stands as a hallmark and an example in a sea of similarity. I did not get chance to meet Marina and the rest of the team behind the project but all I can say is thank you for the experience and I will certainly be seeing you next year.