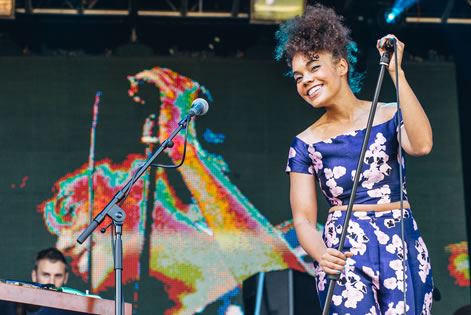 So it was the first year for new festival Boomerang in this year’s event calendar, it promised to bring something new and exciting to the table so we had to just go and check it out. We decided on the Saturday with the likes of Simple Minds, The Proclaimers and much more being the drawer.

Upon arriving I was incredibly impressed at not only the organization but they amount of effort that had been put in to make things as stress free and simple as possible. From arriving, parking and entering the site took a matter of minutes with the staff being friendly and helpful, it certainly put the day off to a great start.

The site itself Hickstead showground was a stunningly beautiful location and no better place to sit down on a summer’s afternoon. First port of call was the bar. There were a choice of bars including the VIP bar, all of which were reasonably priced with no queues. So cool beer in hand we sauntered around the site itself, being a small festival the focus was on quality food and good music, a simple but effective approach. There was in fact so much good food it was hard choosing from the stone baked pizzas to the handmade cakes and fresh coffee - in fact we didn’t choose we had it all!

So no longer thirsty or hungry we took the chance to sit down at the main stage and take in the sounds of the Dubarrys, followed by the Common Tongues, then Andreya Triana, right through to Simple Minds. We were mesmerized by all the acts and didn’t move except to periodically refilling our glasses. The stage itself was perfectly positioned so wherever you were you could see and hear the action perfectly, and just big enough to make the whole affair incredibly intimate, it felt like you were in someone’s grand garden at an event only a few privileged could see.

Each and every artist was superb! However a highlight for me was Andreya Triana, but I am sure everyone had their own favourite and the crowd never stopped from being on their feet and dancing along in the summers sun.

It is safe to say we had a great day and certainly will head back next year. I’d recommend it to young and older couples, families, or even a group of friends who want a really special day out and a great festival experience.

Published on 29 September 2015 by Ben Robinson