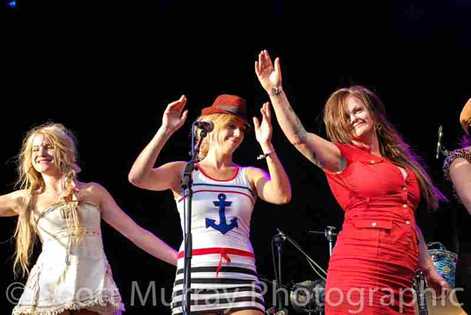 Myrtle park is once more the location for Bradford Councils annual music extravaganza over three days.  This picturesque spot would be host to a range of up and coming well established and veteran acts from around the globe, all with the singular goal of entertaining the gathered masses.

Having covered this event last year several aspects remained the same, namely there is no onsite camping , the bringing of own alcohol is forbidden and the gate opening and closing times remained roughly the same, 3:00pm - 9:30 pm on Friday, 11:30am - 9:30 pm Saturday  and 11:30am - 8:30pm Sunday.  One of the major differences this year was in the number of stages which had grown from two the previous year to three this time and would feature artists as diverse as Nero, Sadie and the Hotheads, Deadwall and the Gods of Hellfire.  Another change was that the Friday night was no longer free of charge, you would have to pay same as the other days which would set you back £25 for a day ticket and £45 for a full weekend pass, which in fairness is still pretty decent value for money.

On our arrival on the Friday we managed to catch the tail end of  Driving Lolita’s set  on the main stage  which was a very impressive fusing of electronica, dance, soul and rock with Front woman Graziella  coming across like some king of alternate reality Aretha Franklin. A reality in which, as opposed to becoming the queen of stax soul, she instead became a foul mouthed heavily tattooed alt-rock Goth bitch from hell and joined the Prodigy. This is not a criticism as I was genuinely impressed with their sound, my only gripe is that I wish they had been moved higher up the bill as I would liked to have seen more.

Following on from these were Stooshie, a three piece girl group who are apparently note-able for  having turned down Simon Cowell in the past and who were touted in the press notes as a kind of sweary EnVogue. The thing is when they came out onto the stage they looked acted and sounded like any other generic uninspiring tween pop act. Plus one of the girls looked suspiciously like a bloke, that said some of the younger members of the crowd seemed to enjoy this bland spectacle, which I used as a perfect opportunity to re-familiarise myself  with the site’s layout which didn’t take long as it was exactly the same as last year.

When I returned to the main stage, Cardiff quintet Kids In Glass Houses were entertaining the steadily swelling crowd before 60’s soul and Motown legend Martha Reeves took to the stage with her ever trusty Vandellas This was notable to me namely because I thought she died years ago and looking at her on the day one might suggest that she actually had. That said good music is good music and I didn’t hear too many complaints from people during this trawl down memory lane which featured the classics Quicksand and Jimmy. Mid way through we decided to take a trip up to the Raise The Roof Stage to catch part of Miles And Erica’s set  these being Miles Hunt and Erica Nockalls of The Wonderstuff  who proceeded to regale the crowd with a combination of Americana fuelled folk and very entertaining between-song banter, which included an enlightening story about the trappings of rock and roll and the virtues of a well baked cake and yes, they did play Size of a Cow.

We returned to the main stage to catch the nights headliners The Charlatans belting out North Country Boy to a gaggle of middle aged dads who’d rushed to the front of the stage. These Manchester journeymen didn’t fail to impress with a set that included other indie anthems such as Weirdo, Blackened Blue Eyes and The Only One I Know with front man Tim Burgess overseeing the proceedings looking like rock’s very own Andy Warhol. Gone was the black pudding-bowl hair and instead he was sporting a long blond do and brought Friday’s entertainment to a suitably satisfying conclusion. He even went so far as to piss off unannounced before the last song had finished leaving the rest of the band to play out  the finale.

Saturday saw us greeted by something we hadn’t seen once the previous day -The Sun, which for us was a most welcome addition to the festival as the day before had been rain, cold and mud requiring me and Scott to break out the wellies which I was particularly reticent about as my feet are still repairing themselves from the last time I wore them at Park life, back in June. So to be able to put on nice ordinary footwear was sheer bliss for me and had me perusing the day’s festivities as though I was walking on air.

The first band of the day for us was Otley Crew The Chevin whose sound was not too dissimilar to Snow Patrol meets Keane. It was just a pity that they were playing to a pretty sparse gathering at that point.  On next were a band I was most eager to see -Sheffield Heavy Metal outfit The Black Spiders who gave the crowd a blistering ‘axe assault’ which helped to generate one of the best and most hilarious mosh pits I’ve witnessed , which at one point featured four hairy geezers in drag dancing to the Spiders Just like a Woman making it one of the most priceless spectacles ever.  The obligatory finger to the band was given by the  crowd in the middle of  Stay Down at  singer Pete ‘Spider’ Spiby’s  request, before they gave the  faithful their soon-to-be classic rock anthem Kiss Tried To Kill Me, which further highlighted this set as the most memorable of the day for me.

After a short break and a wander around the site to another new addition this year,a real ale tent. I caught the majority of punk/blues/garage rockers The Jim Jones Review’s set and very impressed I was too, particularly as I was unfamiliar with this band and their sound which featured some excellent piano work.

Space provided a polished if somewhat unremarkable performance of which I’ll be honest, I was a little disappointed with. Still Neighbourhood and Female of the Species got an airing and I will always give kudos to any band that plays a Theremin onstage.  We chanced upon Jake ‘next big thing’ Bugg on the Raise the Roof Stage who was impressing a sizeable crowd with his Dylan Esq.  musical stylings, before catching local lads The Pigeon Detectives on the main stage providing an Iggy and the Stooges/ The Strokes inspired raucous rock racket before returning to the Raise The Roof Stage again to catch the avant garde ‘to cool for the charts’ (according to the Guardian) spectacle that is King Charles.

DJ Fresh was back on the main stage  with his Fresh Live experience that got the field jumping around before headliners Razorlight closed the show with a dull, insipid and pedestrian performance (though the bassist  wore a great hat) that included Golden Touch, America and a cover of Edwyn Collins Girl Like You, before an excellent firework display brought the day’s proceedings to a noisy, colourful conclusion.

Sunday brought with it yet more glorious sunshine (and for me an irritating sunburn) and a couple of surprises in the band stakes, namely Clement Marfo And The Frontline and Katzenjammer, both of whom I was unfamiliar with before this day. The former are a genre straddling mix of grime hip-hop neo-soul and rock who got the crowd energised with their current hit Champion and the awesome Rowdy which saw Clements’s fellow MC Kojo stage diving into the crowd and somehow able to carry on singing much to the crowds appreciation.  Katzenjammer are a Norwegian four piece female cow-punk outfit (that’s what it says  on the official site)  who are renowned for utilising up to 25 instruments onstage and constantly changing roles during their sets. This day was no different and the girls impressed with their considerable musical ability and a brilliantly bonkers cover of Genesis’ Land of Confusion which bore scant resemblance to the original. Fans and converts were given the added bonus of a second set later in the day on one of the smaller stages.

Staines indie rockers Hard-Fi followed next with a crowd pleasing performance that included their signature tune Living For The Weekend  and singer Richard Archer indulging in some old school rock swaggering. London born reggae fusing dub-stepper Maverick Sabre produced a set that started slow before building momentum to give a rousing finale.

White Lies proved to be another one of the weekends highlights for me with tracks such as Farewell to the Fairground, To Lose My Life and Bigger than Us. It was just unfortunate that I had to spend the majority of the gig staring at the ground as the sun was so low on the horizon at this point that it was virtually impossible to see the band from where I was standing.

It was up to drum and bass titans Nero to close this year’s Bingley Festival who, along with vocalist Alena Watson, gave the revellers an impressive marrying of sound, light and vision which saw Daniel Stephens and Joseph Ray mixing on a built up stage that bore a considerable resemblance to a priests altar, In fact Stephens and Ray could have been mistaken for clergy provided these men of God had gone via the Matrix universe as they were both touting some rather cool looking eyewear.

I enjoyed Bingley 2012 very much as with the previous year it is obvious that the organisers put a lot of their heart and soul into the event so as to provide an original and musically diverse and enjoyable a spectacle as possible. The site itself contains all the facilities you would expect, ticket prices are good value for money and I found all of the staff to be polite and helpful. It may not be one of the biggest festivals around but for me personally it remains one of the best.

Published on 06 September 2012 by iamchronos