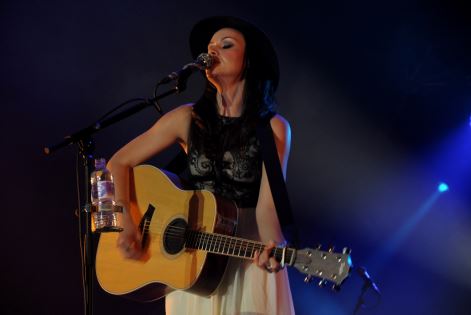 A relaxed party atmosphere settled on the Wickerman site on Saturday (27th July) as festival revellers danced in the sunshine to more brilliant performances across the stages.

Early afternoon saw Inverness band Dorec-a-Belle open the Summerisle Stage, with the carnival sounds of the North Tyneside Steelband a perfect warm up for the line up to follow. The soaring melodies of Let’s Buy Happiness and electro-pop energy of Cherub delighted music fans, before Scottish indie-rockers Roddy Hart and the Lonesome Fire thrilled crowds with their powerful lyrics and classic Americana sound.

Electronic Soul Diva Lulu James proved why she’s top of the music industry’s ‘ones to watch’ list with a blistering set and some serious dance moves that were wildly welcomed by the Wickerman crowd.

Off stage, ‘rock royalty’ lookalikes including Elvis and Michael Jackson paraded the festival’s main arena and walkabout band Blowjangles created an impromptu party wherever they stopped. The Wicker Love Lounge celebrated its first proposal, delivered in a fairy-lit yurt on a custom-made wicker kneeling stool. And Bellowhead’s high octane folk sounds sparked the festival’s first ever mass conga, with hundreds of fans joining in to dance their way across the main arena.

It was a great day for Scottish music as the Solus and goNORTH Tents hosted brilliant performances from Roman Nose, Vigo Thieves, Prides and Casual Sex. Over in the Scooter Tent fans bounced along to classic punk performances from The Amphetameanies, Anti-Nowhere League and headliners The Rezillos.

In the early evening, Kevin Rowland delivered a theatrical, stylish Summerisle set with Dexys, mixing new material and reinterpretations of the band’s great hits Geno and Come On Eileen to a warm welcome from the Wickerman crowd. This was followed by The Enemy’s energetic indie-rock show which had Wicker fans jumping and lead singer Tom Clarke soaring into the crowd – as well as producing the festival’s biggest hands-in-the-air singalong with their cover of James’ ‘Sit Down’.

Amy MacDonald received one of the biggest cheers of the evening, storming through a set packed with festival favourites such as ‘This is the Life’ and ‘Mr Rock & Roll’, leaving the Summerisle crowd chanting her name long after she left the stage.

All bands bow to tradition at Wickerman and at as midnight approached, the full festival site fell into darkness and this year’s Minotaur Wickerman statue was spectacularly burned against a backdrop of fireworks. Crowds then returned to the Summerisle stage for one of the most anticipated acts of the night – Public Service Broadcasting – with the quirky duo on a mission to ‘inform, educate and entertain’ the Wickerman masses into the early hours.

Festival Co-ordinator Helen Chalmers paid tribute to fans for their good spirits and also to the Wickerman team for making the 12th festival one to remember. ‘This year’s Wickerman has been our most successful yet and I want to say a huge thank you to our artists, fans and our festival team here at Dundrennan for all their hard work and commitment each year. We’ve seen a perfect mix of brilliant performances, beautiful weather and a very relaxed and happy crowd on site which has resulted in a festival that has been enjoyed by everyone involved.’

Superintendent Mike Leslie of Police Scotland said: ‘We have had a very good natured event with no major issues causing the police or emergency services any concern so far. We’re extremely happy with the way that the festival has gone over the past two days.’