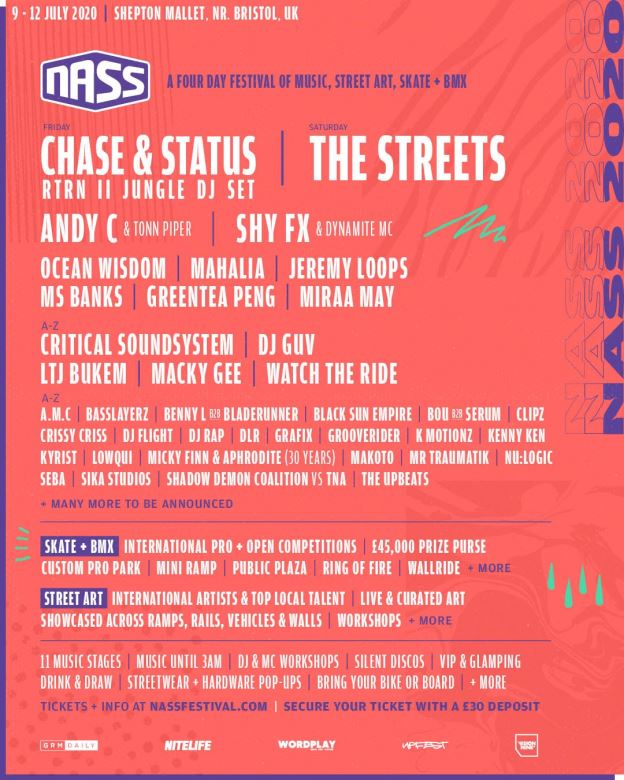 On Friday Chase & Status RTRN II Jungle DJ Set will perform a blistering set that’s been 17 years in the making, while The Streets will deliver an electric finale to Saturday, with a set full of anthems spanning their incredible career. Building up the hype throughout the weekend are some of the biggest names in the game right now including Andy C & Tonn Piper, SHY FX, Ocean Wisdom, Mahalia, Jeremy Loops, Miraa May, Greentea Peng and Ms Banks.

In 2020, Chase & Status will celebrate 17 years together and with their awesome new project RTRN II Jungle the electronic heavyweights go back to where it all began, diving headfirst into their roots and resurfacing with a blast of nineties jungle. With hits like ‘Blind Faith and ‘End credits’ featuring Plan B and an impressive collection of Gold and double platinum albums, Chase & Status confirmed their status as one of the most successful British acts of the past decade. The Streets arguably changed the face of British rap music with their debut album ‘Original Pirate Material’ and created some of the most important music of the millennium in the process, with hits like “Dry Your Eyes” and “Blinded By The Lights”. Mike Skinner and his phenomenal touring band have an incredible bank of classics to deliver an unforgettable NASS performance.

For the expected 30,000 festivalgoers, the big hitters continue, with the likes of iconic British drum and bass DJ, Andy C & Tonn Piper, and the legendary SHY FX adding DnB and jungle vibes to the weekend. NASS also welcomes London rapper Ocean Wisdom and the soulful Mahalia. As always, NASS delivers a wealth of flavour, with South Africa’s Jeremy Loops and his fusion of booming city rhythms and lilting folk, sitting alongside the Soulful R&B tones of Miraa May. Taking things up a notch will be hotly tipped rising hip-hop starlet Ms Banks.

Beyond the music, NASS will return with epic skate and BMX competitions, with the biggest names on the international scene battling it out. Street art also continues to play a huge part in the festival with various dedicated pieces to be showcased on site. More details to be revealed in 2020. Bristol-based artists The Hass and Kin-Dose have already set the tone, creating two incredible murals to unveil Chase & Status and The Streets today.

In 2019, NASS welcomed 30,000 festivalgoers to the Bath & West Showground, delivering a sold out, epic weekend of music, street art, skate and BMX. To relive the best of NASS 2019, check out the official festival aftermovie here. HUCK declared it as "The best grime, old school hip-hop and electronic goodness" while the Metro lauded the "High-octane music meets super-urban sports” offering. GRM Daily said ”the atmosphere was electric” and Wordplay Magazine summed it up perfectly, pronouncing NASS as "an essential festival for bass heads and skaters alike".

Published on 28 November 2019 by Ben Robinson