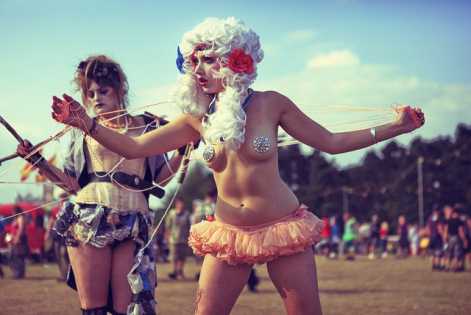 With an incredible site and a stellar lineup over 14 stages showcasing hundreds of DJs and live acts from around the globe, Glade 2012 is set to become the must-go-to festival for all lovers of underground electronic music.

The Glade experience is one of beautiful countryside and beautiful beats, where you can party until dawn without disturbance and without a care. Houghton Hall is one of the few places in the UK where such an experience can be had. No matter which community ortribe, all are invited to  come together and participate in this never-to-be-forgotten  four-day celebration. It is your very own electric Eden. So what are you waiting for….

This enchanted wooded and open parkland site at Houghton Hall (which has not been used for any other music festival), is without a doubt the perfect permanent home for Glade. Behind the scenes the award-winning Secret Productions team (promoter of the year in the 2011 Festival Awards) will be taking care of the production and contributing that extra-special SGP twist to proceedings.  Expect a mouth-watering four days of fun-fuelled mayhem. Glade 2012 is back to show every other UK dance festival how it’s done.

Covering the whole spectrum of insane electronic music and with a definite preference towards bass-heavy beats, Overkill is the forward-thinking music-lover’s paradise. Headlined by Warp Records impresario Jimmy Edgar alongside Ninja Tune’s experimentalist from the US West Coast Daedelus , UK Drum & Bass hero Dillinja and UK rave legends SL2. Elsewhere we welcome three of the most exciting producers in new club music; Adission Groove, Pinch and Bodikka deliver the in-your-face pressure. Addison will play a full 808 drum machine live set  and then DJ B2B with Rashad for some straight up booty / footwork action. Exclusive to the UK, Javier Estrada brings his unique Mexican moombah style to the field alongside Glade-legends Ceephax Acid Crew and a glade first from glitch-core originalist Si Begg. If you love quality IDM, whatever your flavour, then this arena is for you.

This year the festival’s central pyramid will be a stage in its own right… that is until it burns down on Saturday night. Our second concept venue, this stage will house a 360 degree sound system and will be presented by London’s underground heroes Hypercolour and The Sneaker Social Club from Brighton, featuring one of the biggest names of 2012 Eats Everything alongside on of the pioneers of the UK Funky sound Mosca, Bristolian dubstep weapon Appleblim, expect the programming to be as explosive as the structure itself.

The Meteor Stage makes its debut this year, hidden in a thirty foot deep crater with trees around its edges and bass bins at its core. Deeper in you will find the Liquid Stage, a psychedelic adventure that lasts until eight in the morning. Deeper still you’ll come across members of the Secret Garden family, whether it be medieval bard-core ravers of feral fever badger discos. It sounds insane, and probably will be. Presented by East London underground party Uppercut, The Meteor is the first of our concept stages this year. Playing all the latest sounds of the underground, surrounded by trees, and kicking off the party of Thursday, this is a stage we’re very excited about.

The Glade is proud tocall itself the UK’s spiritual home of psychedelic culture and the Psychedelic Village is a celebration of this. With the mighty Origin Stage at the heart of this area playing host to Nano Records 10th Birthday Party and powered by glorious Funktion 1, this stage will be banging come rain or shine. This year we are more than chuffed to welcome back the Liquid Stage, which will runfrom dusk ‘til dawn in our beautiful new forest area (more on that below…) and playing host to the cream of the UK scene. Providing respite from the onslaught of EDM, no Glade would be complete without InSpiral who this year focuses on chill out with a superb line up to make your journey complete. InSpiral will be laying down the chillout 24hours a day, so if you find it hard to sleep, there’ll always be somewhere to go where the vibes are gentle, the cushions soft and the people magical.

View the full line up here