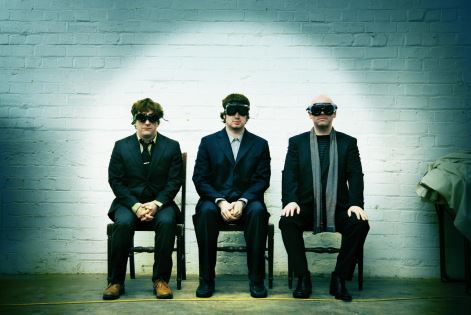 Award-winning trio Lau, are the latest act to be confirmed for Beverley Folk Festival 2014. They enhance an exciting bill of music, comedy and literature which already includes headline performances from Billy Bragg, Home Service and Chas & Dave.

Lau will appear on Saturday, June 21st @7pm with support from Caladh Nua (Ireland) and Mànran (Scotland). Tickets are £17.

Brilliant musicians, thrilling performers, free-thinking visionaries and all-round good chaps Lau – made up of Martin Green, Kris Drever and Aidan O’Rourke – have been BBC Radio 2 Folk Award Winners for Best Band, in 2008, 2009, 2010 and 2013.

Lau’s debut album Lightweights and Gentlemen, released in 2007, mixed original tunes with arrangements of songs like the traditional ‘Unquiet Grave’ and Ewan MacColl’s ‘Freeborn Man’ and thrust them into the fore of the burgeoning new folk scene.

Such was their reputation as a stage act that they followed Lightweights and Gentlemen with the Lau Live album and then, in 2009, came the equally well-received Arc Light, with a grander setting that even produced a heavily played single, ‘Winter Moon’.

Cue more awards, tours, headline festival appearances, splinter bands and a string of intriguing collaborations that flavoured their hugely successful fourth album, Race The Loser. Accolades include five stars from The Guardian who also listed the album in their Best Albums of the Year poll and a shortlist nomination for Scottish Album of the Year 2013 (SAY Awards).

For over 30 years Beverley Folk Festival has been producing an annual weekend event to be remembered, and was shortlisted in the Best Family Festival category at the UK Festival Awards 2013.
Offering the best new performers alongside some of the greatest established acts, it is a unique opportunity to spot tomorrow’s stars and enjoy today’s greats.
Whilst British folk music, both traditional and new, remains at the heart of the festival, Beverley has also featured Americana, world music, Blues, some classic rock, punk, a variety of acoustic performances, Morris sides and much more. In recent years the festival has encompassed comedy, film, poetry, drama, literature and storytelling. Beverley Folk Festival provides a rich cultural mix, offering a weekend of memories for young and old.

Published on 28 January 2014 by Ben Robinson