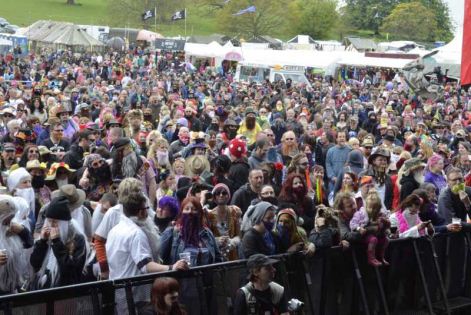 BEARDED THEORY have today announced the full line up for the Magical Sounds Dance Stage for next year's festival.
Headlining the bill are three legendary live dance outfits; The Egg, Subgiant and A Guy Called Gerald.
The Egg need no introduction as one of the UK's best known electronic dance music bands. Formed over 20 years ago in Oxford, their impact on the British dance music scene cannot be understated - something demonstrated by superstar DJ David Guetta, who's bootleg of their track 'Walking Away' became a worldwide hit.
A Guy Called Gerald aka Gerald Simpson, is a hugely prolific dance music producer whose production work and DJing has spanned four decades and multiple genres: from Acid House, through Techno, Electronica and Drum & Bass.

This very special Festival performance features live vocals from legendary singer (and former Urban Cookie Collective frontwoman), Diane Charlemagne, and Jungle Drummer: the long-time beat-smith for London Elektricity, one of the most influential live acts in dance music history, who can drum live at over 180 BPM.
Subgiant are one of the UK's most exciting live dance acts. With a genre-defying setlist spanning Breaks, Trance, Techno, Dub and Drum and Bass, their reputation for excellently crafted live performances has led to them being booked at some of the biggest venues and festivals in the country.
Also appearing on the Magical Sounds Stage at Bearded Theory 2013 are psy-Trance legend Ed Tangent, Hillbilly Acid Post-Punk band Sicknote (live), Psycadelc dance music project OOOD, and over 30 more live acts and DJs.
Ticket Info:

Bearded Theory 2013 tickets are priced at £79 (Adults), £40 (Under 16's), £10 (Under 12's) and Under 5`s are free (ticket is still required). A Family Ticket for 2 Adults & 2 Children is £220. Booking fees apply.
Additional tickets options available that include Thursday camping.
Tickets are available from www.quaytickets.com, www.theticketsellers.co.uk or by calling 08432 081 835. All include 3 nights of camping and access to all music and on-site events. No day tickets will be sold for the 2013 event.
For futher information and full list of announced acts for 2013, visit www.beardedtheory.co.uk

Published on 27 November 2012 by Wayne Feltham