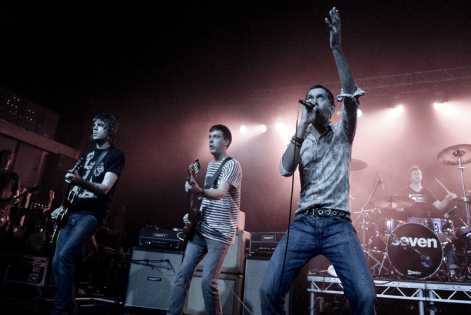 The T in the Park 2012 bill just keeps building, with festival organisers DF Concerts and founding partner Tennent’s Lager announcing an array of artists to tempt and tease every musical palette, including ‘must see’ acts of the moment Django Django, We Are Augustines and Childish Gambino, pop sensations McFly, Cher Lloyd, Cover Drive and Lawson plus Shed Seven, The Subways and The Jezabels who have been added to the line-up today (Tuesday 27th March).
The newly announced acts join an already stellar bill of festival heavyweights including Snow Patrol, The Stone Roses and Kasabian who will headline T in the Park 2012 and wow the 85,000-a-day strong crowd, between 6th – 8th July.
York-based indie rockers Shed Seven rose to success during the Brit Pop era, boasting fifteen Top 40 UK singles and four Top 20 UK albums.  The band went their separate ways in 2003 but reformed in 2007 to play a few select shows before announcing their Maximum Hits Tour in 2011, in celebration of the 15th year anniversary of the release of album A Maximum High.   Shed Seven are firm fans favourite and their performance at T in the Park is sure to bring back memories of classic Brit Pop at its best.
Cult indie rock band The Subways are back with their third album Money and Celebrity and as veterans of the festival scene, they are sure to be a favourite with the T in the Park crowd. Having worked with producers such as Butch Vig (Nirvana, Smashing Pumpkins, Sonic Youth) and Stephen Street, The Subways never fail to deliver a raw, high energy rock and roll performance and that’s what fans are all set to get this summer.
Donald Glover raps under the stage name Childish Gambino. Raised just outside of Atlanta, Georgia, Glover has a versatile résumé, with an array of established talents including acting and stand up comedy but with his debut commercial album, Camp, it’s his music and the battle-ready rhymes in his songs that’s currently got everyone talking and T in the Park fans will see why this summer.
For fans who like to throw the very best of pure pop into their festival mix, T in the Park are pleased to welcome McFly.  They may have started off as a squeaky clean pop band, but these boys have grown up! McFly are a boy band with a big difference, having managed to break away from their recording deal to launch their own independent label to allow them artistic and creative freedom.  Their songs have matured with them and huge hits such as Shine a Light with Taio Cruz have given them massive crossover appeal. Currently completing their Keep Calm and Play Louder Tour, McFly will be all fired up and ready to rock at T in the Park 2012.
Cher Lloyd has the edge and attitude to hit the headlines and the charts with her own unique style.  Her debut single Swagger Jagger went to No.1 and was taken from Top 5 debut album Sticks + Stones.  Her success captured the attention of legendary music producer L.A. Reid who quickly signed her to Epic Records in USA, where Cher Lloyd’s success is also set to soar.
Barbados quartet Cover Drive dominated the airwaves with one of this year’s biggest pop hits Twilight which debuted at No.1 earlier this year.   New single Sparks is set to light up the charts when it’s released in April (22), preceding debut album Bajan Style which features tracks produced by the team behind Rihanna and Jason Derulo.
Art-pop foursome Django Django consists of vocalist and guitarist Vinny Neff, drummer Dave Maclean (brother of Beta Band’s John Maclean), Jimmy Dixon on bass and Tommy Grace on keyboards. The band met at Edinburgh College of Art and are causing a huge stir on the emerging music scene, with their eponymous debut album and unique style gaining them rapid growing success with critics and fans alike since its release in January this year.
For festival fans wanting to see the best of the world’s breaking acts, organisers have secured a trio that are creating a major buzz with music fans and critics alike. Brooklyn-based band We Are Augustines are on the fast track to success, dominating key credible radio slots and with strong press reviews across the board for debut album Rise Ye Sunken Ships (iTunes alternative album of 2011) and first two singles Book of James and Chapel Song.  The band are also making a name for themselves on the live circuit and are currently touring Europe with The Maccabees.  It will be a sweet return to the UK when they play a standout set at T in the Park this summer.
Sydney four-piece The Jezabels are self-proclaimed ‘intensrockers’ and have been making their name across the globe as an incredible live act. Following the release of their critically acclaimed debut album Prisoner, the band wowed the audience during their NME Awards show in February and continue to show indie rock at its best as they tour Europe, USA, Canada and Australia before coming to Kinross to captivate the T in the Park crowd.
London-based four-piece Lawson are a band who captured the attention of industry and fans after posting an acoustic performance of their song She on YouTube. The band has supported some of the biggest names in pop including P!NK, The Wanted, Ellie Goulding and The Script, but 2012 will see them firmly in the spotlight in their own right.