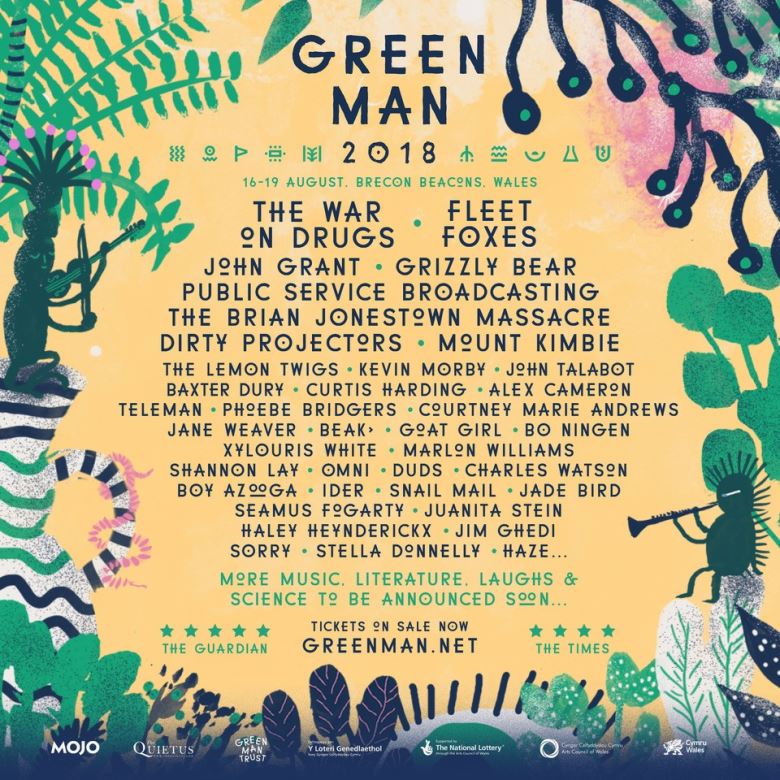 Following on from last year’s special 15th anniversary, Green Man is delighted to announce the first details of its 2018 event, which will, once again, take place in the stunning surroundings of the Black Mountains, deep in the heart of the Brecon Beacons.

More than just a music festival, Green Man is built around 10 unique areas, offering enchanting worlds to be explored, taking in late-night revelry and day time relaxation, including a full beer and cider festival, science and discovery areas for the kids, and dedicated film, art, and literature events that run alongside the dazzling display of music.

With early-bird tickets selling out in record time, this year’s festival will be as busy and brilliant as ever-before, welcoming a striking array of talent from all over the globe to our beautiful Welsh home in the heart of the Black Mountains.

Tickets are on general sale now, and having sold out in record time last year, we recommend snapping them up as soon as possible! Also on sale once again is the famous Settler’s Pass, a special ticket which allows early access to the site from Monday 13th August, and includes discounts on local heritage sites, galleries, castles and more, for those wanting the full holiday experience from Green Man 2018.

Having last graced the stage back in 2009, Green Man is delighted to welcome back Seattle’s Fleet Foxes, a band that has grown into one of the most prestigious in the world; Robin Pecknold’s songwriting finding new and ever-inventive ways to try and figure out this thing we call life. Alongside them, The War On Drugs make their much-anticipated return - their classic rock canon well and truly in tow - fresh from releasing their wonderful fourth album, A Deeper Understanding, last summer,

Alongside that formidable double-header, Green Man is honoured to welcome the incomparable John Grant back to the Brecon Beacons for the first time since 2010, an artist who, both with his work with The Czars and subsequent solo releases, has proven himself to be a true and genuine one-of-a-kind; as have Grizzly Bear, whose fifth album, Painted Ruins, was their most thrilling and inventive to-date, beautifully showcasing their development over the past decade and more.

Also appearing in 2018, Jane Weaver brings her warped and wonderful cosmological psych-pop, following the release of her magnificent seventh album, Modern Kosmology; Dirty Projectors will supply brooding art-rock mastery, alongside Public Service Broadcasting who return with their concept album based on the Welsh mining industry; Mount Kimbie promise to enthral with their dense electronica, and Phoebe Bridgers, Courtney Marie Andrews, and Howling Bells’ Juanita Stein will offer something altogether more refined and introspective.

Elsewhere, we’re delighted to welcome Japanese noise-rock maestros Bo Ningen, who, alongside the infamous Brian Jonestown Massacre, will turn up the heat with their electrifying live shows; while Kevin Morby returns with his mystical rock and roll, as well Shannon Lay whose mesmerising 2017 LP was the first release on Morby’s own record label.

All of that and we’ve still got Friday night’s headliner, and a whole host of other artists, to announce! Keep your eyes peeled for further announcements…